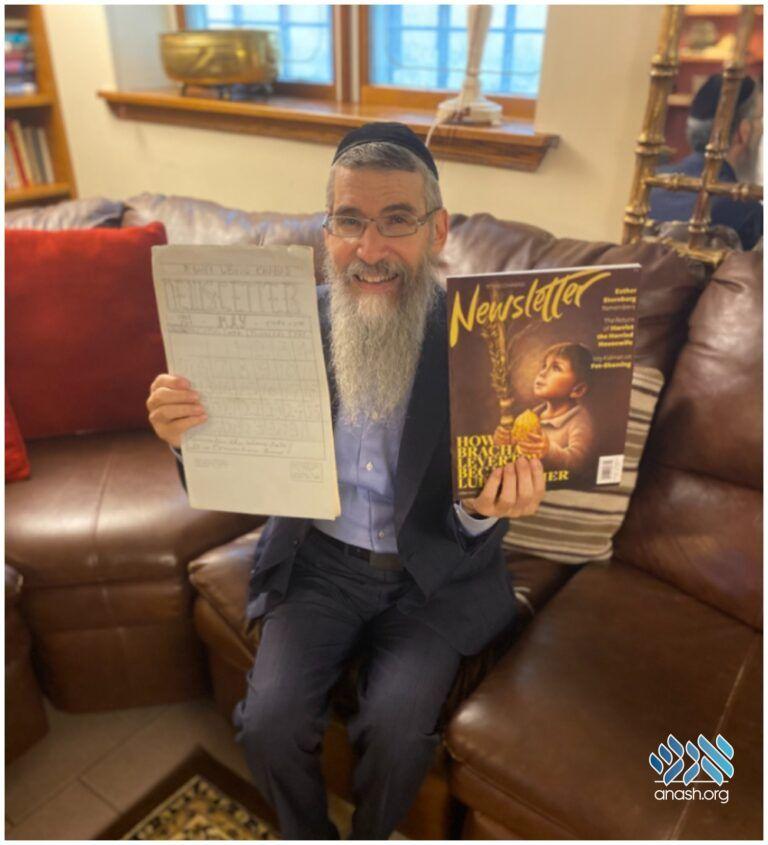 After 40 years on stage, Avraham Fried has stories to tell! And he told them to the N’shei Chabad Newsletter in an exclusive interview. Read it in the Gimmel Tammuz edition, available soon in Crown Heights stores.

After 40 years on stage, he has stories to tell! And he told them to the N’shei Chabad Newsletter in an exclusive interview. Read it in the Gimmel Tammuz edition, available soon in Crown Heights stores or by subscription: nsheichabadnewsletter.com/product/subscription

“I’m opposed to taking our holy prayers and setting them to unholy songs. You can’t take non-Jewish pop songs and make them holy. If after 120, I am asked in heaven if I ever used a non-Jewish tune, I hope I can proudly answer no…”

“Fame is powerful, and at the same time, dangerous. If you have success, don’t let it go to your head. Being in a position of fame is an incredible responsibility. Suddenly, you have credibility in what you say and do, whether you deserve it or not. Simultaneously, there is so much good that can be accomplished. You can have a positive impact on people and change their lives. It’s a privilege and an achrayus…”

Ever since we began publishing Lazer Raksin‘s articles on his adventures while on mivtza tefillin, readers have asked for more. The Tammuz issue has Lazer’s latest stories, which include an actual cliffhanger:

“My heart was racing. At some points, huge boulders blocked the way and I had to maneuver around them to move forward. I asked the bus monitor to jump out and let me know when the wheels of the bus had reached the edge of the cliff. The bus had a four foot hangover, so even though it felt like I was already suspended in thin air, as long as the wheels were still on the road we were safe…”

Goldie Grossbaum tells a story that should be required reading for every person who is going to work in a camp this summer.

“…The child comes home from camp; he’s had an amazing experience filled with inspiration, trips, activities, swimming, games, sports and more. But what’s the first thing that he says?

‘“He took my keychain and wouldn’t give it back! Even though he said he would! And it was three dollars!!”

“A broken promise from an adult.

“After much deliberation, the child’s father reaches out to the (young) head counselor and tries to bring him into the bigger picture—the harm in adults failing kids and breaking their trust—and asks the head counselor to replace the keychain. It’s not about the three dollars, it’s about the lifelong lesson of adults keeping their word when they make promises to children. The father says he will send him the three dollars; please show him you take him seriously. He is convinced you told him he’d get it back.

‘“Sure,” agrees the head counselor, understanding that it’s about more than the money. He doesn’t have the keychain, of course, but it’s easily available to replace.

‘“He’s going to send you the keychain,” the father tells his son; the look of his eyes lighting up, of his integrity and trust being restored, is hard to miss.

‘”A week passes, followed by the father receiving a message from the head counselor: “I changed my mind, I’m not sending it. I don’t give back things that I take away from campers…”’

Esther Etiquette (written by the one-and-only beloved columnist Chana Kornfeld) addresses a woman (who signs off as “Shvitzing From the Shver and Shvigger”) who has complaints about her mother-in-law, since the mother-in-law ignores the children’s birthdays:

“…Be extremely careful of how you speak about your parents-in-law in front of your children and watch your facial expressions and body language too. Your children will pick up and absorb your attitude towards their paternal grandparents. If you choose to focus on the good, and appreciate it, so will the children. If you speak disparagingly about them because they don’t do things exactly like your parents do, the children will chas v’shalom feel exactly the same and be robbed of a deep and loving bond with their grandparents.

“One last thought, Shvitzing. With Hashem’s help, you’ll be a mother-in-law yourself one day and I assure you, there will be things you don’t do as well as your daughter-in-law will think you should. Treat your mother-in-law with the grace and respect that you’d like to receive from your future daughter-in-law. Your sons are watching you, all the time, and learning what to expect from their future wives. If they watch you speak ill of your in-laws, they will assume all women speak ill of their in-laws and they won’t be too perturbed when their wives speak ill of you and decide to create steel-walled boundaries between you and them because of all the “wrong” things you are doing. Be a model of graciousness, maturity, and acceptance and you will see these traits blossom and grow in your children and IYH grandchildren in the future. Wishing you much nachas!”

Read all this and more in the Gimmel Tammuz edition, available next week in Crown Heights stores or by subscription: nsheichabadnewsletter.com/product/subscription