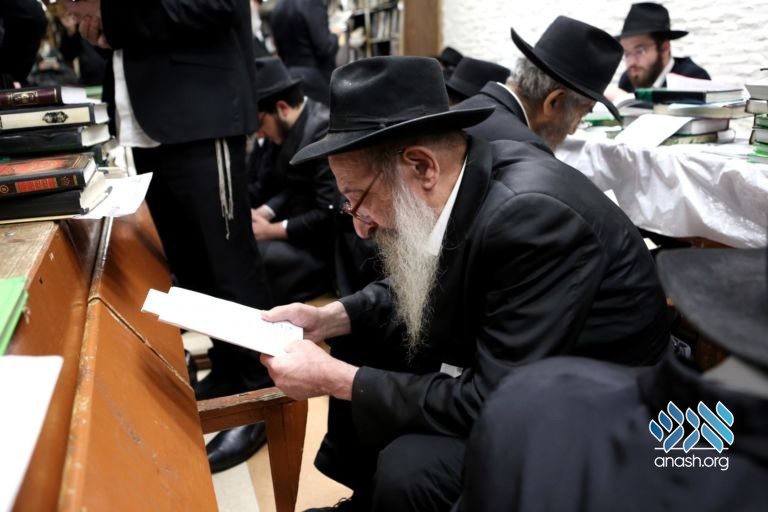 This year’s kevius of Tisha B’Av falling out on a Shabbos, leads to some interesting shailos. In what follows we will touch upon one of them.

The halacha is that one may not don Shabbos clothes on Tisha B’Av, except for a Bris Milah (see Kitzur Shulchan Oruch Simon 124, 18 and 125, 8 for details). However, this year, we enter the fast on Motzoei Shabbos already garbed in our Shabbos clothes. Which leads us to the shaila: Should one change into weekday clothes before going to Maariv?

We decided to do some of our own research.

Rabbi Leibel Groner, the Rebbe’s mazkir, told Anash.org that in such a kevius the Rebbe would always come to mairiv with Shabbos clothing. This was seconded by Rabbi Meir Harlig and Rabbi Michoel Seligsohn.

However, one could argue, that this may not serve as a conclusive proof since the Rebbe did not go home before mairiv and did not have the opportunity to change. The Rebbe was able to change into sneakers, as Reb Meir Harlig pointed out, since they were kept in his room in 770 for use when going to the Ohel.

Against that argument, Rabbi Groner pointed out that even in the later years when the Rebbe would stay an entire week at 770 and had the ability to change into weekday clothing, he did not.

Likewise, we have heard elder chossid Reb Mendel Aronov of Toronto quoted as saying that he does not recall chassidim changing on Motzoei Shabbos.

In practice, we have heard that Harav Yosef Heller, Rov and Rosh Kollel in Crown Heights, feels that the Rebbe’s conduct in this matter serves as a clear maaseh rav which should be relied upon. This conclusion is echoed in the various halachic guides posted online.

We would like to wish our readers an easy fast and may we merit to see Moshiach before this Tisha beAv!