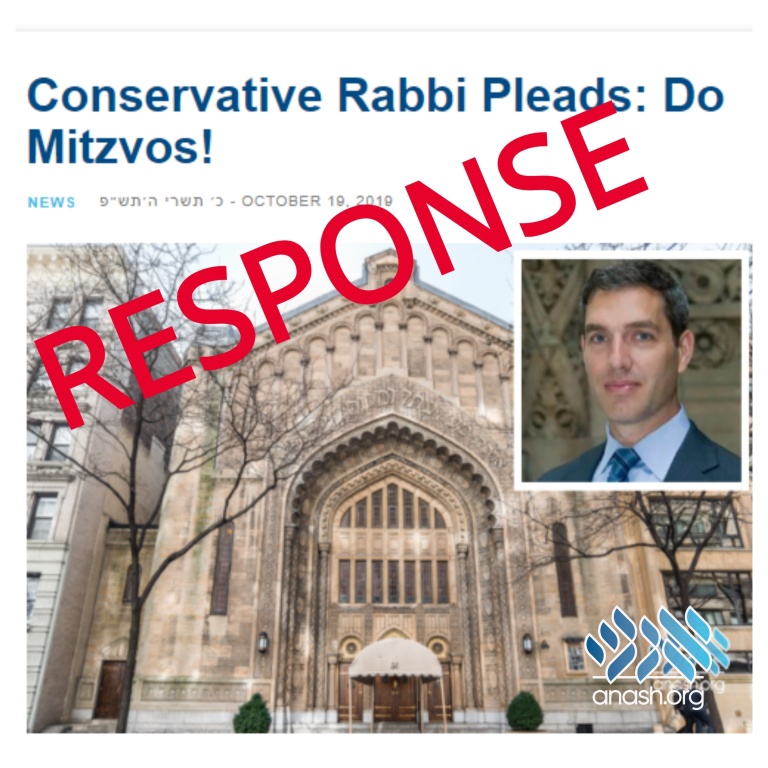 Following a recent article on a Conservative rabbi’s Yom Kippur speech, a reader shared his reaction to seeing these words shared on Anash.org:

“When ppl do מצות מעשיות that’s a big thing. Especially when we know that מצוה גוררת מצוה.

When ppl weren’t doing it till now because they were תינוקות שנשבו We have a nice לימוד זכות for them.

When a preacher who represents a movement of כפירה speaks we shouldn’t be excited and share it with the world as if we’re part of it.
His point is that jewish identity can’t exist by just talking about the holocaust, Israel and anti semitism because ppl don’t go for it. Instead we need to focus on distinct Jewish actions. Cultural bond. Did anyone hear anything about divinity of mitzvos? צוותא וחיבור עם מצוה המצות?

The reason why he isn’t a chabadnik is because we are narrow minded. He has a broader, more inclusive view on what a mitzvah is, מיהו יהודי, and jewish law. He’s making it clear that he’ll continue to take goyim in and address them by microphone on yom Kipur because Gd isn’t in the picture.
All the assembled came to do distinct jewish acts aka mitzvot.

That’s the נקודת הענין . It’s pure כפירה!
And of course to claim this is the Rebbe’s shita is the biggest insult…”