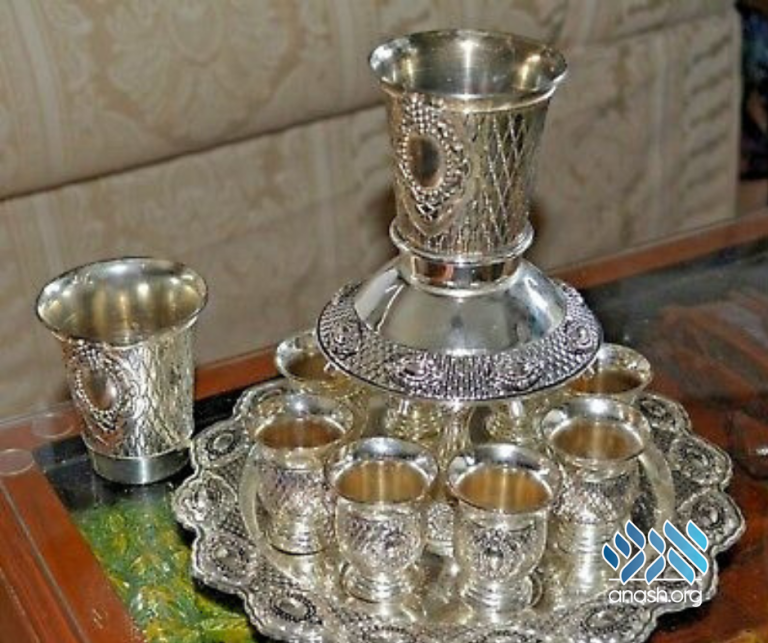 Ask the Rov: What is the optimal way to distribute the kiddush wine?

The wine used for kiddush must contain the quantity of a reviyis (at least 2.9 oz., and some are mehader to use 4.1 oz.), and the cup should optimally be full. In order for the obligation of kiddush to be fulfilled, the one making kiddush must drink a cheekful (k’mlo lugmav). The actual amount is measured according to each individual, and is around the majority of a reviyis (1.5 oz., and according to contemporary poskim it is usually around 2 oz.), but never more than a full reviyis(even for someone with a very large cheek).

If it is difficult for the one reciting kiddush to drink this amount, one of the listeners may drink it, provided that one person drinks a full cheekful. The others being yotzei with the kiddush don’t need to drink at all, and they fulfill their obligation by listening and answering amein. Yet, the optimal manner of fulfilling the mitzva is for them to sip some wine from the kos shel bracha.

Wine used for a kos shel bracha should not be “blemished” (pagum). It becomes pagum once someone drinks from the cup—even without touching their mouth to the cup—but not if the wine was poured from the original cup into another cup to drink. The blemished status may be rectified by adding a little more wine that wasn’t drunk from.

It is optimal for everyone being yotzei to drink wine that is not pagum. Therefore, before distributing the kiddush wine, one should add a little more wine from the bottle to rectify the remaining wine in the cup. While some hold that there is no issue of pagum if the others drink from the actual kiddush cup, the Alter Rebbe implies that this is no exception.

An even better option is to pour out wine from the kiddush cup for the listeners before drinking from it, since this way it never became pagumat all. A disadvantage to this method is the pause made between the bracha and drinking, and an insult to the bracha by pouring out before drinking. Nonetheless, since the purpose of pouring is for drinking (of the listeners) it isn’t considered a hefsek. One must make sure that a full reviyis remains in the kiddush cup when he drinks.

A third option, and seemingly the best, is to have cups of wine prepared for the participants before kiddush. All the prepared cups are deemed cups of blessing, just like the cup of the one making kiddush.

In practice, one may follow any of the three options, due to personal preference or family custom.