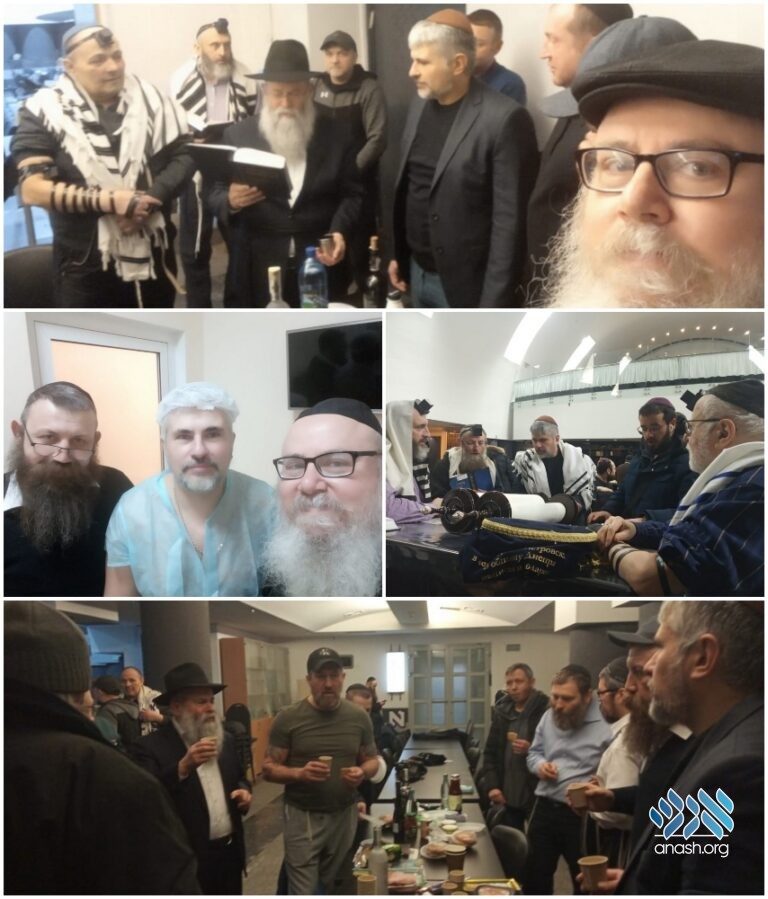 Despite being displaced from his home and his country being under brutal attack, a Jewish man in his 40s chose to undergo a bris in Dnipro on Monday, with community members taking part in the emotional event.

In midst of the Russian invasion of Ukraine, and as sirens ring in Dnipro, one 40-year-old Jewish man made the heroic decision to get a bris milah, bringing tears to the eyes of the local community.

The protagonist, a Ukrainian Jewish man by the name of Mr. Baikov, lives in Kharkov and escaped to Dnipro as the Russians continuously shelled his hometown. After being welcomed by the shluchim and Jewish community of Dnipro, Baikov decided to undergo a bris milah, an opportunity denied to him in his youth under the Soviet rule.

Members of the community gathered for the event, an especially emotional one as the country is under continued attack, and many Jewish citizens and shluchim flee the country, while others have their lives cut short or properties destroyed.

The bris was held at the Jewish Medical Center in the Menorah Center, and was performed by Rabbi Yaakov Geisinovitch chief mohel of Ukraine and Moldova, and representative of the international “Bris Yosef Yitzchak” organization. The honorary role of the sandak was given to shliach to Pavlograd, Ukraine, Rabbi Yehuda Kellerman.

Rabbi Shmuel Kaminetzky, Chief Rabbi and Head Shliach to Dnipro, was honored with reading the brachos and krias hashem. When Baikov chose the name Dovid as his Jewish name, Rabbi Kaminetzky emotionally called out “…Dovid ben am yisroel“!

At the end of the ceremony, a seudas mitzvah was held in the Golden Rose synagogue, and then David Baikov was called up for an aliya with his new Jewish name proudly called out.