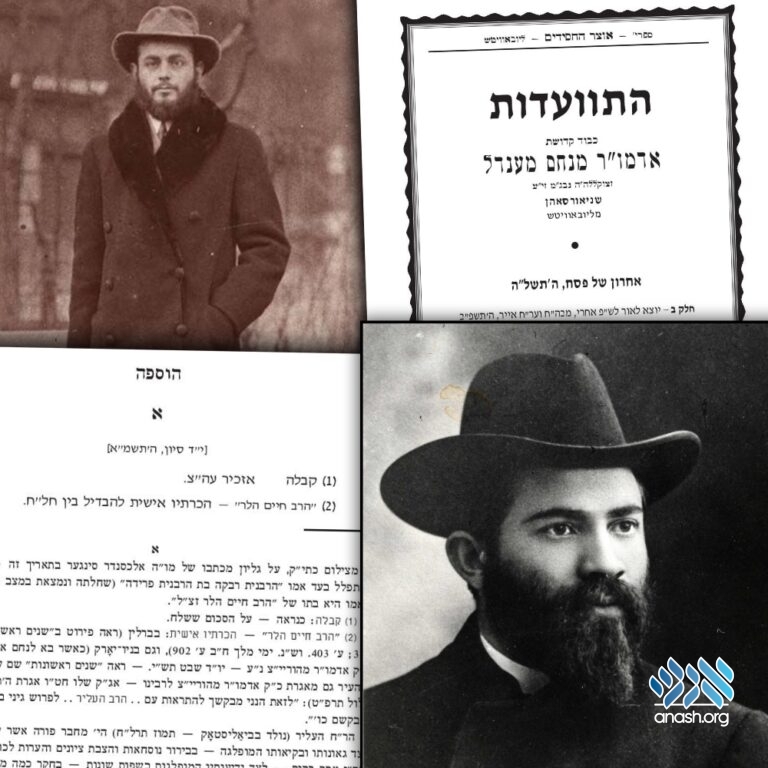 In a newly published letter, the Rebbe relates a rare personal anecdote, shedding light on his acquaintance with the “Ilui of Warsaw”, this confirming the hypotheses of Chabad scholars.

In a newly published letter, the Rebbe relates a rare personal anecdote, shedding light on his acquaintance with the “Ilui of Warsaw”, this confirming the hypotheses of Chabad scholars.

On 14 Sivan 5741, Rabbi Alexander Singer sent a letter to the Rebbe, requesting a blessing and asking the Rebbe to pray for his mother, Rivka bas Freida, who was in critical condition. In his letter, he notes that his mother is the daughter of the late Rabbi Chaim Heller.

On the letter’s margin, next to the words “Daughter of Rabbi Chaim Heller,” the Rebbe wrote in his own handwriting, “I knew him personally, lehavdil bein chayim l’chayim.”

These two words, “I knew him personally,” confirm the hypotheses of Chabad scholars, and scholars of the Rebbe’s history in general, who have written about an early acquaintance between Rabbi Heller and the Rebbe in Berlin, before the Holocaust.

The Gaon Rabbi Chaim Heller, or in Yiddish pronunciation, Helir, was born in Bialystok on 20 Tammuz 5639 (1879) to his father, Rabbi Yisrael Pinsker. He grew up in Warsaw where he became famous as the “Iluy of Warsaw.” From age 10, he stopped studying with teachers and instead sat and learned Torah alone, never studying in a Yeshiva.

After marrying the daughter of the wealthy Rabbi Alexander Sender Diskin of Lodz (the brother-in-law of Rabbi Chaim Shneur Zalman Yosef Schneersohn of Wielicz—Lodz), he settled in Warsaw. In his uncle’s house, he had the opportunity to meet with the greats Torah giants of that generation and talk with them in learning. Rabbi Eliyahu Chaim Meisel from Lodz testified that he “goes through the entire Shas in one glance”…

He was known for his brilliance and sharp wit, and his erudition in all segments of the Torah. He was a prolific author; he devoted extensive time to clarify girsaos and to edit several fundamental works, and also engaged extensively—due to his knowledge of languages —in researching some of the Torah translations, while waging a fierce war against “Bible critics.”

In 5674 (1914), he published an edition of the Rambam’s Sefer HaMitzvos, which is widely cited in Likkutei Sichos and throughout the Rebbe’s Torah. From his writings, it is apparent that he also planned to publish a new edition of the entire Mishneh Torah as well.

A few years after the First World War, he emigrated to Berlin, where he founded the “Beis Midrash Elyon” in 5682 (1922), which he directed for several years until its closure. After several years of wandering, he came to the United States and settled in New York, where he continued to write books and articles, and gave classes at Yeshivas Rabbeinu Yitzchak Elchanan (YU). He passed away on Erev Pesach 5720 (1960), and was buried in the Mt. Judah Cemetery in Ridgewood, NY, leaving behind a wife and three daughters.

The Rebbe’s “personal acquaintance” with Reb Chaim began somewhere at the end of the years in which Reb Chaim lived in Berlin (5682-5689/1922-1929). According to the accounts, the Rebbe came to hear his shiurim in the Beis Midrash Elyon. The Rebbe lived in Berlin from 4 Teves 5688 (1927) until his wedding, and then he returned several months after the wedding (on 14 Kislev 5689 (1928) with Rebbetzin Chaya Mushka, remaining there until the end of the winter of 1933.

In the letter, the Rebbe goes on to write: “Surely all his writings have been published. If not—it is probably best to publish them now, at least. I think that his mother tichye has dealt with this in the past.”

On the margin of the letter, there is a handwritten note by the Rebbe’s secretary, Rabbi Leibel Groner: the answer was passed on, and the writer (the grandson) thinks everything was already printed—but that he would look into it to find out.

Indeed, several years later, “Mesoras Hatanach” in four volumes was printed by Rabbi Heller’s son-in-law, Rabbi Yosef Yitzchak Singer, the father of the letter-writer, based on the writings that were passed to him upon the death of his sister-in-law, Miriam, the daughter of Reb Chaim.

This historical discovery is published in the Igros Kodesh segment in the weekly pamphlet from Lahak Hanochos published for Acharei Mos (in chutz laaretz), Erev Rosh Chodesh Iyar.

Every week, newly discovered sichos, maamarim, and letters are published. To receive the weekly pamphlet, send an email to [email protected] with the subject line: Please add me to the weekly email.