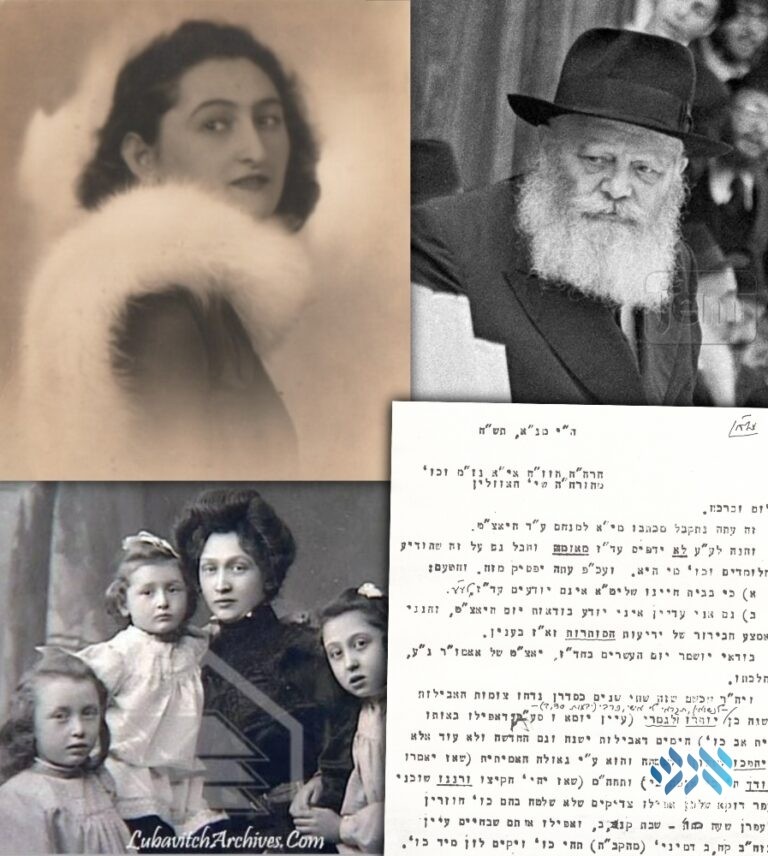 The second day of Rosh Hashanah will mark the 80th yahrzeit of Rebbetzin Sheina, who was murdered by the Nazis in Treblinka. The Rebbe led a quiet effort to find out about her fate without causing pain to the Frierdiker Rebbe.

Rebbetzin Sheina Horenshtein was the third daughter of the Frierdiker Rebbe and Rebbetzin Nechama Dina, born on Friday night, 21 Teves 5664, at 12am.

On Lag Baomer 5692, her Tenaim took place with her cousin, Reb Mendel Horenshtein (a grandson of the Rebbe Maharash through his mother, Rebbetzin Chaya Mushka). On 10 Sivan, her wedding took place in Landvarov, Poland.

The Frierdiker Rebbe made immense efforts to rescue his daughter and son-in-law from the European inferno, but they were tragically caught in the Nazi trap and sent to the Treblinka death camp, where they were killed in sanctification of Hashem’s name.

Following the war, the Rebbe began to look for information about his sister-in-law and her husband, while being careful to hide all information from the Frierdiker Rebbe, whose state of health — they feared — would not be able to handle the heartbreak.

Confirmation regarding their passing arrived at the Rebbe’s desk in Av of 5709, but the Rebbe published the information only on 25 Cheshvan 5711 (Reb Mendel’s eighth yahrzeit), in the preface to a booklet with a Maamar of the Frierdiker Rebbe:

“This booklet is dedicated in honor of . . . the Rebbe’s youngest daughter, my sister-in-law Rebbetzin Sheina, and in honor of his son-in-law, my brother-in-law Horav Menachem Mendel Hakohen son of Rebbetzin Chaya Mushka (daughter of the Rebbe Maharash).

“To this day, there isn’t much clear information about them — except what follows below — and therefore their names appear as above, without the additional blessings [indicating their passing] — and the printing was delayed all this time to avoid causing grief to those in the family who did not know about this information…

“According to the letter of Mr. Mordechai Unrad, who was in the Treblinka death camp, he was — in 5702 — in the same barracks as my brother-in-law Horav M”M Hakohen. He shared with Mr. Unrad that his mother — Rebbetzin Chaya Mushka — and his wife — Rebbetzin Sheina — were in a second barrack there.

Throughout the years, the Rebbe recited Kaddish on the second day of Rosh Hashanah, in her memory.

*
Below are two excerpts from the Rebbe’s sichos about Rebbetzin Sheina:

Shemos 5725 (Toras Menachem v. 42 p. 113):
…Regarding Shabbos, there is a simple saying which sums up the whole idea of Shabbos. The Rebbe [Rayatz] related this story about his youngest daughter [Rebbetzin Sheina] who was killed in the sanctification of Hashem’s Name, and whose birthday is today: Her grandfather, the Rebbe Rashab, once told her regarding Shabbos that one should do all things in honor of Shabbos, even sleeping — it should be done in honor of Shabbos. She responded that she was capable of doing all things in honor of Shabbos except for sleeping — she couldn’t commit to doing that.

Of course, this is not just a story about a conversation between a grandfather and granddaughter; after all, this is about the Rebbe Rashab, a Nasi, a ‘general soul,’ who always conducted himself in a manner of “bechol derachecha da’eihu.” This was the case during weekdays, and certainly the case on Shabbos, and certainly at that occasion, when he spoke about the importance of Shabbos.

The words he spoke to his granddaughter are a lesson for us and for everyone (being that a Nasi is dedicated to the well-being of the Jewish people, and also being that the Rebbe [Rayatz] shared the story) — that even sleeping should be for the sake of Shabbos…

With the approach of Rebbetzin Sheina’s eightieth yahrzeit, several letters are being published for the first time. These letters were part of the Rebbe’s efforts to secretly find out what had happened to his sister-in-law, her husband, and his brother-in-law’s mother.

These letters are printed as an addition to the weekly Lahak booklet, and will be distributed on Rosh Hashanah and 10s of thousands of copies throughout the world.

The first letter is dated 10 Sivan 5708 and addressed to “Mrs. Takar.” In this letter, the Rebbe’s secretary, Mr. Eliyahu Kwint, requests pictures of Rebbetzin Sheina and her husband, and asks for information about their passing.

The second letter — on Merkos stationary — is dated 1 Tammuz 5708 and addressed to the same individual. The Rebbe thanks for sending photographs of Sonia (Rebbetzin Sheina’s nickname) and again asks for information about the dates and circumstances of their passing.

The third letter, dated 18 Av 5708, was sent to Rabbi Chanoch Hendel Havlin of Yerushalayim on Merkos stationary. In this letter — which is in continuation to correspondence in which the Rebbe asked that learning be held in Rebbetzin Sheina’s memory — the Rebbe tells him not to publish anything about Rebbetzin Sheina nor to tell any of the learners about her identity, to ensure that the information would not reach the Frierdiker Rebbe. The Rebbe notes that “I am not sure about the date of her passing, and I am in middle of investigating contradictory information in this regard.”

“May it be His will, that just as over the past two years, the mourning-fasts have been pushed off… May they be transformed to joy with the coming of the true redemption . . . and the resurrection of the dead.”

The new Lahak booklet contains — for the very first time — a Hebrew hanachah of the Rebbe’s farbrengen of Erev Rosh Hashanah 5736, and two of the new letters.

To print the booklet:

The picture of Rebbetzin Sheina is courtesy of Jewish Educational Media. We thank Rabbi Elkanah Shmotkin for sharing it with us.