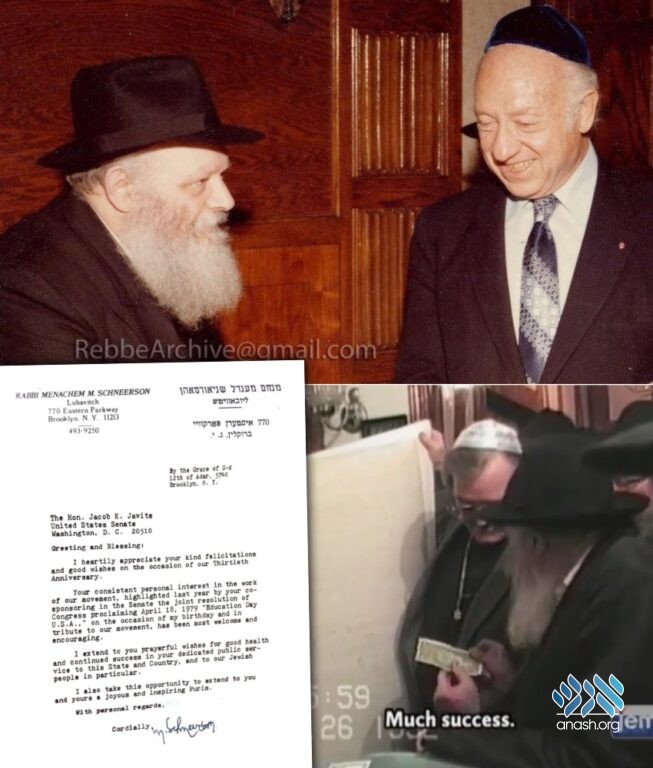 As Chassidim around the world increase in their efforts to present the Rebbe with befitting birthday gifts, ranging from matzah distribution, to hundreds of new mosdos, a timely discovery was made.

A letter addressed to the late New York Senator Jacob K. (Yaakov Koppel) Javitz was released by Vaad Or Vechom on their daily WhatsApp broadcast just days ago. The letter illustrates the Rebbe’s personal appreciation for efforts to honor his birthday.

“Your consistent personal interest in the work of our movement, highlighted last year by your co-sponsoring in the Senate the joint resolution of Congress proclaiming April 18, 1979 “Education Day U.S.A.,” on the occasion of my birthday and in tribute to our movement has been most welcome and encouraging,” the Rebbe wrote in the letter thanking Javitz for his congratulations from Yud Shevat.

In another broadcast, a video showed artist Michel Schwartz presenting the Rebbe with a canvas depicting the world after Moshiach’s coming. Pointing to the word “Tzaddik” on the canvas, the artist noted it was in honor of the Rebbe’s 90th birthday, and it would be ready for Pesach. “Perhaps by the 11th?” the Rebbe asked, giving an additional dollar for the rush.

In another clip from the same video, the Rebbe encourages an individual to complete his paper before Yud Alef Nissan, in honor of the Rebbe’s birthday. When the fellow responds that his birthday is also before Pesach, the Rebbe says “Then it will be a good present for us!”

Learn more about Yud Alef Nissan and prepare your unique gift to the Rebbe by signing up for the WhatsApp broadcast for bite-sized inspiration ahead of this special day.

To receive the broadcast with new, fascinating material daily, sign up here.