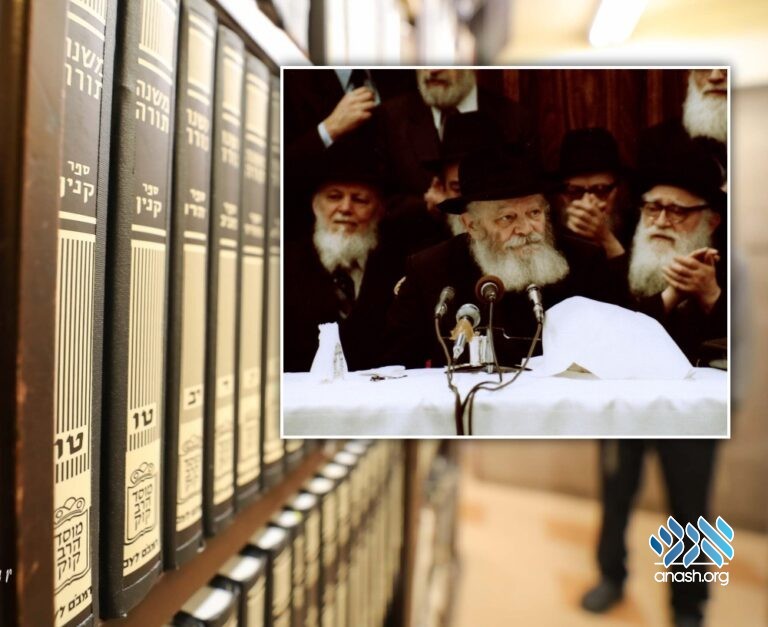 While learning the daily study of Rambam on Tuesday, shliach Rabbi Yossi Lipskier noticed something unique. A search of the Rebbe’s sichos found that the Rebbe had addressed the phenomenon and learned a special lesson from it.

While learning Rambam today, some may have noticed something unique: Hilchos Pesulei Hamukdashin Perek Vov is being learned in both cycles, Shlosha Prakim and Perek Echad.

Did the Rebbe ever mention this in his Sichos on Rambam?

It was during the farbrengen of Shabbos Parshas Balak 5748 (Sefer Hasichos 5748 vol. 2 page 534). That year, Shiva Asar B’tammuz fell on Shabbos, and the Rebbe spoke at length (based on the Gemara הואיל ונדחה ידחה), that Shabbos reveals the pnimiyus of this fast day, and gives us a special power to push off the fast completely, and ultimately turn it into a Yom Tov when Moshiach comes.

While on the topic of awaiting the Geulah, the Rebbe said he wanted to stress something that many people don’t realize, and even prefer to ignore: The Rambam says (Hilchos Melachim 11:1), that one who doesn’t believe in Moshiach or doesn’t await his coming, denies not only the words of the Neviim, but also of Torah and Moshe Rabbeinu!

That tells us something about the importance of simply waiting for Moshiach!

Furthermore, said the Rebbe, even someone who claims that he doesn’t await Moshiach, is only fooling himself, since every Yid truly wants to do all the Mitzvos, it’s only that his yetzer overcomes him (as the Rambam says elsewhere, Hilchos Geirushin 2:20).

The Rebbe then connected this to the Rambam of that day (Hilchos Pesulei Hamukdashin 6:1), where it says that animals (baalei chaim) have halachic importance and are never batel (nullified) or nidche (rejected).

“Baalei chaim”, the Rebbe explained, are a reference to Bnei Yisroel, who are called “chaim – alive” (Devarim 4:4). As a nation, their true identity is that of a korban to Hashem. Hence, they can never be nullified or rejected (and anything negative associated with them, like fast days, will be rejected and ultimately nullified).

In a footnote there (99), the Rebbe notes: The daily study of Rambam amongst all Jews is one of those things that hasten and bring the Geulah. It’s an achdus yisroel created through learning the halachos of Torah, which are said to bring the Geulah (Vayikra Raba 7:3 as explained in Likkutei Torah Devarim 1b-c).

And b’hashgacha pratis, this Halacha, which itself is all about the greatness of each Yid and Ahavas Yisroel and Achdus Yisroel, is studied together by those learning Shlosha Prakim and by those learning Perek Echad!

So there you have it. The Rebbe making mention of this unique day, when the Achdus Yisroel created by Limmud Harambam is doubled, as all Yidden unite in learning the same Perek.