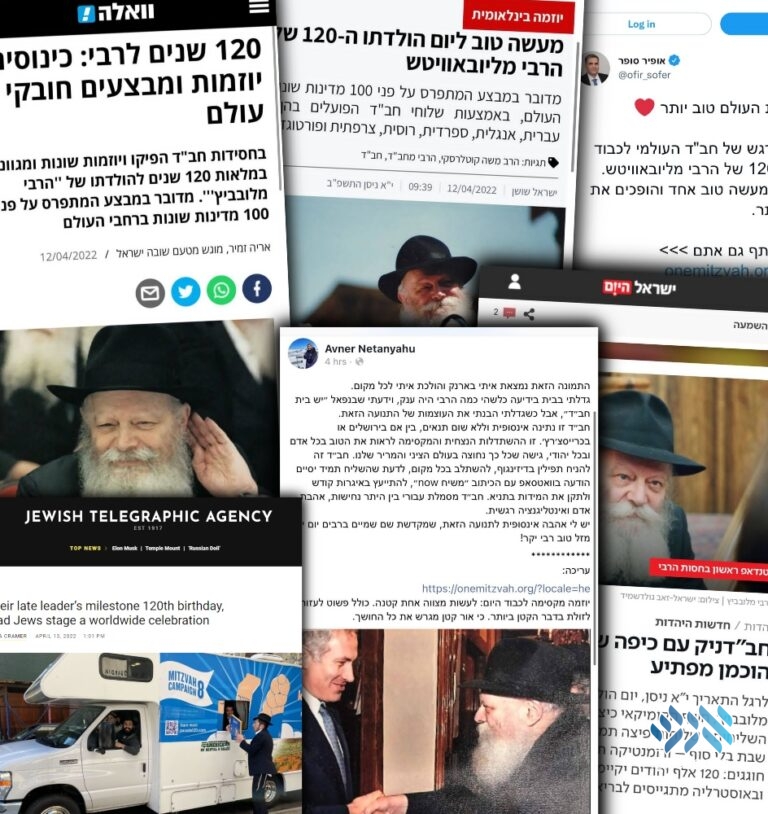 Knesset members, media personalities, and other public figures in Eretz Yisroel marked Yud Alef Nissan this year by encouraging their followers on social media to add one more Mitzvah in honor of the Rebbe.

“One tweet without politics and cynicism,” tweeted Mati Tuchfeld at 11:14 AM on April 12.

A senior political correspondent at Israel Hayom, Israel’s most widely read newspaper, Tuchfeld paused his routine journalistic work and turned his attention to the day’s biggest story. He was joined by many politicians and media personalities in taking a refreshing breath outside of Israel’s notoriously tense political atmosphere. Instead, they focused their attention on a meaningful, productive, and unifying cause.

Yud Alef Nissan this year marked the 120th birthday of the Rebbe. A campaign entitled OneMitzvah honoring the occasion, quickly spread throughout Israel, encouraging people to take on one additional Mitzvah. It went viral across social media and numerous media outlets. “Take a moment, fill out the form, and bring the world closer to Geula,” read the continuation of Tuchfeld’s post.

“The Rebbe’s milestone birthday received wide attention worldwide, especially in Eretz Yisroel. This is a testament to the impact of the Rebbe on every person. His message and teachings resonate still with everyone regardless of background, upbringing, or religious observance,” said Rabbi Moshe Kotlarsky, Vice-Chairman of Merkos L’Inyonei Chinuch. “As always, such excitement must be channeled into action to ensure its continued effect on our lives. This is the way the Rebbe taught us to celebrate his birthday.”

The Yud Alef Nissan Campaign, launched by the OneMitzvah.org team at Merkos 302, encouraged every person to commit to additional Mitzvos in honor of the Rebbe’s momentous birthday. The fundraising-styled platform gave communities and individuals the ability to create their own communal campaigns, set Mitzvah goals, and track their progress.

“Goal: 120,000 Israelis in the next day,” declared Boaz Golan in his Tweet and linked to the OneMitzvah campaign page. Golan is a news anchor on Israel’s Channel 14, owner of the news site ‘0404’, and founder of “Mikey” – an Israeli social network similar to Facebook.  Golan’s tweet garnered much attention, even being retweeted by journalist Erel Segal, who has over 122,000 followers (which is the Israeli equivalent of nearly a million followers in the US).

Many prominent figures in Israel turned to social media to share their personal connection with the Rebbe and Chabad while encouraging their followers to take on a Mitzvah. Avner Netanyahu, the youngest son of the former Prime Minister, Benjamin Netanyahu, shared a picture of his father with the Rebbe. He described how the image is kept in his wallet, accompanying him wherever he goes. “Chabad is about endless and unconditional giving, whether in Jerusalem or New Zealand,” wrote Netanyahu in his Hebrew Facebook post. “It is the eternal endeavor to see the good in every person and every Jew, an attitude so necessary in our cynical and bitter world.”

Politicians from various parties across the political spectrum joined the movement. Galit Distel-Atbaryan, MK for the Likud, pledged to increase her Kibud Av V’em – respect for her parents. “Today is the birthday of this giant of a man. His tangible and spiritual contributions to the world are impossible to convey in words.” she wrote, after detailing the profound effect of the Rebbe and his teaching on her personal life.

“What are you adding to your basket of Mitzvot” the MK challenged her 83,000 followers on Facebook and Instagram.

Former spokesperson for the Haredi Shas Party and close advisor to former Prime Minister Netanyahu, Itzik Sudri, referred to himself as the “most pro-Chabad member of Shas.” in his Yud Alef Nissan morning tweet he asked that everyone join and choose one Mitzvah to make the world better and brighter – “just as the Rebbe did.”

Sharing the campaign with the religious communities, Aryeh Erlich, Deputy editor of hugely popular Mishpacha Magazine and a radio host in Israel, requested that the public take a hachlata and help achieve the target goal of 120,000.

Avner Netanyahu concluded his post, echoing a message similar to one the Rebbe once told his father regarding his role as ambassador to the UN. “Because a small light banishes all the darkness.”