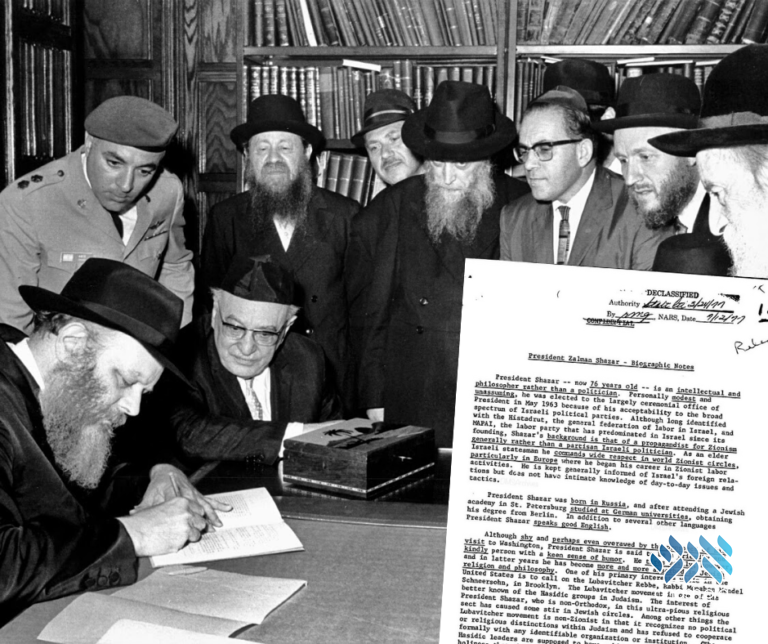 A recently declassified CIA assessment of Zalman Shazar highlighted the Israeli President’s connection to Chabad and the Rebbe.

A recently declassified CIA assessment of Zalman Shazar highlighted the Israeli President’s connection to Chabad and the Rebbe.

It was common for analysts at the CIA to compile psychological and personality assessments of foreign leaders to help presidents or government officials to prepare for meetings or negotiations.

This one compiled in ahead of one on President Shazar’s trips to the United States reads:

President Shazar — now 76 years old — is an intellectual and philosopher rather than a politician. Personally modest and unassuming, he was elected to the largely ceremonial office of President in May 1963 because of his acceptability to the broad spectrum of Israeli political parties. Although long identified with the Histadrut, the general federation of labor in Israel, and MAPAI, the labor party that has predominated in Israel since its founding, Shazar’s background is that of a propagandist for Zionism generally rather than a partisan Israeli politician. As an elder Israeli statesman he commands wide respect in world Zionist circles, particularly in Europe where he began bis career in Zionist labor activities. He is kept generally informed of Israel’s foreign rela­tions but does not have intimate knowledge of day-to-day issues and tactics.

President Shazar was born in Russia, and after attending a Jewish academy in St. Petersburg studied at German universities, obtaining his degree from Berlin. In addition to several other languages President Shazar speaks good English.

Although shy and perhaps even overawed by the prospect of his visit to Washington, President Shazar is said to be a friendly and kindly person with a keen sense of humor. He tires easily, however, and in latter years he has become more and more absorbed in Jewish religion and philosophy.

One of his primary interests while in the United States is to call on the Lubavitcber Rebbe, Rabbi Menaben Mendel Schneersohn, in Brooklyn. The Lubavitcher movement is one of the better known of the Hasidic groups in Judaism. The interest of President Shazar, who is non-Orthodox, in this ultra-pious religious sect has caused some stir in Jewish circles. Among other things the Lubavitcher movement is non-Zionist in that it recognizes no political or religious distinctions within Judaism and has refused to cooperate formally with any identifiable organization or institution. (The Hasidic leaders are supposed to have achieved ao perfect a state of holiness that they can serve as mediators between God and the common people.)