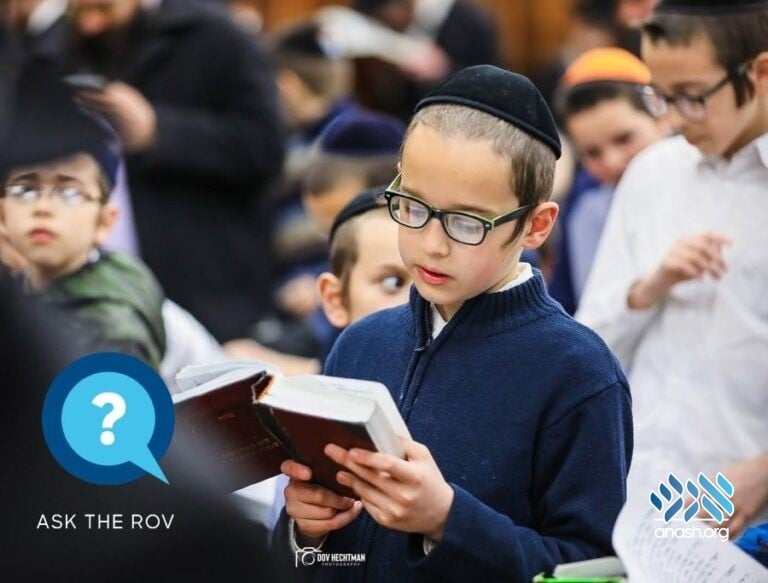 Ask the Rov: To what extent should children be trained to daven?

A father is obligated to train his children to daven, either under the general rubric of chinuch — according to the view that it applies even to mitzvos derabanan — or because the need to beseech Hashem for mercy is equally applicable to children.1

From when a child can speak, his father is to educate him to recite “Torah tziva,” and then also “Shema Yisroel.” While some view this as an initial training for davening, the Alter Rebbe seems to understand this to be part of teaching him Torah,2 and the possuk “Torah Tziva” was chosen to inculcate in the child that the Torah was given from Hashem.3

Once the child reaches the age of chinuch for davening— between ages 6 and 10, depending on his emotional and intellectual development — he should be trained to recite parts of shema and Shemoneh Esreh. 4

What about reciting krias shema bizmana? Some poskim exempt the father since he is often not home during those hours of the morning and evening that the child is awake, but the Alter Rebbe writes that one should teach his child to recite shema b’zmana.5 When the son reaches age 12, the father is obligated to train him to recite shema in the proper time.6

The obligation to train a chinuch-aged child in Shemoneh Esreh is unanimous. This is either due to the aspect of asking for mercy, or because the appropriate times for davening give more allowance than the times for shema.7 The Alter Rebbe writes that the father should train his child to daven “morning and evening,” which some understand to mean only Shacharis and Maariv, but not Mincha which occurs when the father isn’t necessarily next to his child. However, others include Mincha as well.8

One should be careful to train a child gradually and not overburden the child, which can backfire and cause them to dislike davening. Begin with the primary sections of davening, such as birchos hashachar, birchos krias shema, shema, and Shemoneh Esreh. Once they are accustomed to those, gradually add more sections, with the goal of them saying the entire davening by age 12.10