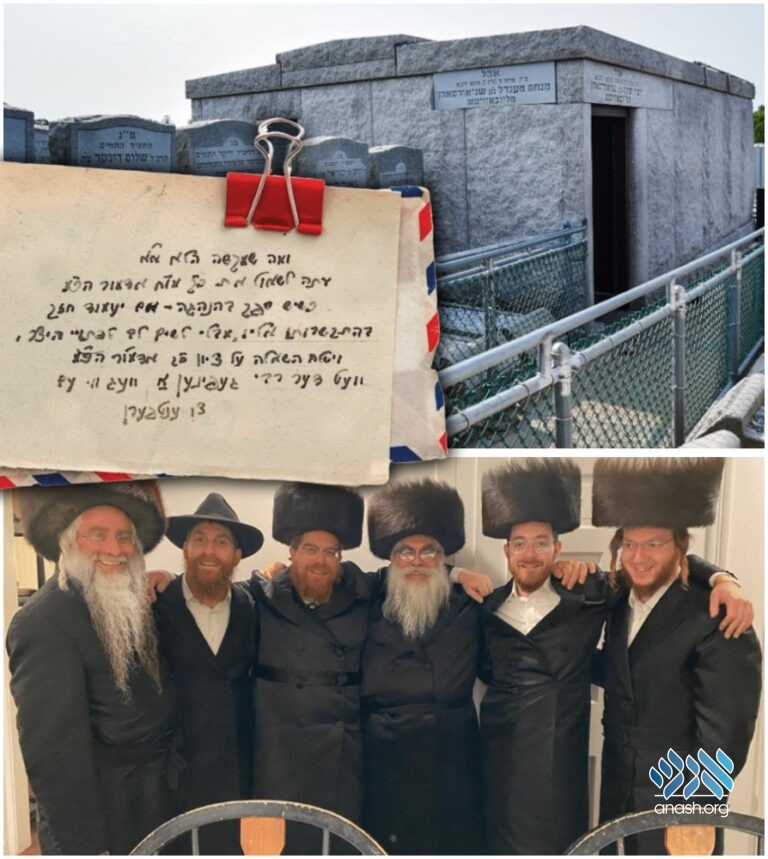 Spending Rosh Hashanah by their rebbe, two Stoliner chassidim confided in each other about fertility issues in their families, and made up to daven for each other. A tefillah at the Rebbe’s Ohel brought the double miracle.

By Rabbi Avraham Bleich (Detroit, MI) as told to A Chassidisher Derher

Several years ago I celebrated the wedding of my son in Eretz Yisroel on the same night that a former talmid of mine from the Stoliner Yeshiva got married in America. We are both Stoliner Chassidim and a year and a half later I met this former talmid in Yerushalayim as we were spending Rosh Hashanah by the Stoliner Rebbe.

We were happy to see each other in person and started catching up. At some point in the conversation, he confided with me that he and his wife had been concerned as time passed from the wedding, and in consultation with fertility experts they discovered that both of them had insurmountable fertility issues.

I felt his pain and said to him that my son’s chasunah took place on the same night as his and thus far he and his wife had also not been blessed with children or to even become pregnant, although there were no known fertility issues. In the spirit of the teaching of Chazal, “כל המבקש רחמים על חבירו והוא צריך לאותו דבר הוא נענה תחילה”  whoever davens for mercy for his friend, when he needs the same thing, he is answered first,” I suggested that we exchange names. He would daven on behalf of my son and daughter-in-law and I would daven for him and his wife.

Several months later I was delighted to hear the good news from my son that they were expecting a child, but I hesitated to share this with my talmid, lest he did not have similar news to share and my news would just pour salt on his wounds.

A few months later I was in New York for a wedding and delightedly ran into my talmid. Now that we were face to face I asked him if there was any progress and he joyfully told me that they were expecting a child very soon. “I should have notified you earlier but I hesitated, lest I hurt you… ”

Needless to say I was happy to report that my son and daughter-in-law were blessed as well, and he then proceeded to share with me an amazing story.

As he had mentioned to me months earlier in Yerushalayim, he and his wife were diagnosed with insurmountable fertility issues. They continued seeking medical advice and eventually the fertility experts devised a plan of action to at least give it a try.

Throughout the entire process, they had gone to the Ohel on numerous occasions to ask for a bracha and on the night before the anticipated procedure they went to the Ohel as well.

The next morning, before heading out to the clinic for the fertility procedure his wife was shocked and delighted to discover that she was pregnant!

Elated and in shock they arrived in time for their appointment and shared the news with their doctor. In disbelief, the doctor ordered a more comprehensive lab test and the results were undeniable: This couple who had both been diagnosed with insurmountable fertility issues did not need the scheduled procedure after all! A clear miracle!

A few days later, his wife suggested that they return to the Ohel to thank the Rebbe for such a wonderful miracle and to daven on behalf of my son and daughter-in-law that they should also be blessed with children.

Amazed at the story he just shared, I asked him if he knew the date he and his wife were at the Ohel. He pulled out his phone and checked his calendar to determine the date of the scheduled procedure and after a phone call or two we connected the dots: My daughter-in-law had become pregnant at the earliest opportunity after my talmid and his wife had returned to the Ohel to daven for my son and daughter-in-law.

Join thousands of Chassidim who strengthen their Hiskashrus with the Derher magazine each month!
Subscribe today to start receiving your copy.