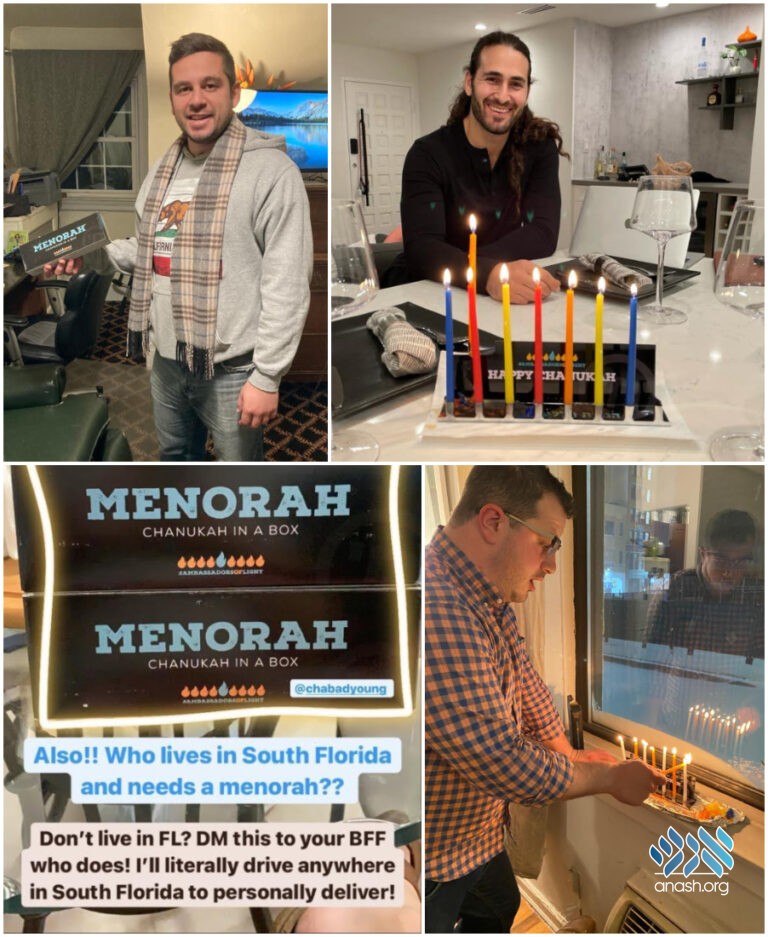 Through the CYP Ambassadors of Light program, shluchim have transformed their entire network into literal lamplighters, spreading menorahs to people and places they would never be able to reach on their own.

“Every Yid is a lamplighter!” the Rebbe Rashab famously declared. And in the years that have since passed, chassidim have indeed been lighting up the world with Torah, mitzvos, and the unique warmth of Chassidus.

For the past few years now, come Chanukah time, for a growing group of shluchim for young professionals, that adage has manifested quite literally. Through the unique Ambassadors of Light program, shluchim have transformed their entire network into literal lamplighters, spreading menorahs to an unprecedented pool of people and places.

The concept is quite simple, and it’s something the Rebbe consistently encouraged shluchim and really all chassidim to do: empower the people you know to draw not only themselves closer to Yiddishkeit, but to influence others as well. “Every Jew is a shliach!” the Rebbe thundered time and again, and with this uncomplicated yet powerful program, that’s really happening.

To that end, Shluchim order cases of menorahs and distribute large amounts to specific members of their community, who then pledge to share them further with their circle of influence.

“The impact has been something out of this world,” said Rabbi Sholom Brook of Chabad Young Professionals of Minneapolis, MN. “Last year, one of the young adults in our community got very excited about the idea, as it was in the throes of COVID and people were still quite isolated here. He posted in a neighborhood app called Nextdoor that he had menorahs available to give out, and his success was off the charts: he single-handedly gave out 65 menorahs!

“Another young man in our community travelled to Russia with the CYP Ambassadors trip and was inspired by a group of wealthy donors there who call themselves the ‘Solomon Group.’ They don’t just donate money, they also donate significantly of their own time to various programs and causes in the Chabad house there. When he came back to Minnesota, it was before Chanukah and he decided to be an Ambassador of Light, giving out 35 menorahs!”

The advantage of a community member as the one distributing the menorahs is obvious: they are able to reach people and places a shliach would never be able to reach on his or her own.

“The reality is that most Jews who are involved already have a menorah,” said Rabbi Mendy Levertov of Chabad Young Professionals of Austin, Texas, “and those who are not involved, well, they’re not involved, so how am I going to reach them? So yes, the Jews in my circle are more or less taken care of, but what about all the other Jews in Austin? Why should they lose out just because they’re not in my circle?

“The Ambassadors of Light is the answer. Last year during COVID, I gave out cases and cases of menorahs—without even getting off my couch!”

Rabbi Levertov highlights another important element of the program. “This is a no-strings-attached program, so people are very receptive to taking menorahs and paying them forward. I make it very clear that I’m not looking for more contacts or money. All I want is to get more menorahs in the hands of more Jews. That’s it. People go crazy for it.

“A lady in our community, Mel, told us that her friend Brian took a menorah from her and lit it every night, for the first time in ten years. He explained to Mel that he was comfortable taking it from her because ‘She wasn’t a Rabbi.’”

Becoming an ambassador is a tremendous boost for the ambassador herself as well. She is empowered to own her Judaism, and over the years the program has been running, shluchim have seen remarkable growth from the ambassadors themselves.

With a highly attractive, newly rebranded design on the box, the menorahs from CYP International are a runaway hit. Additional resources from the central offices are available, such as a full suite of marketing materials; they’ll even call your community members and recruit them to become ambassadors.

The Rebbe’s vision of making every Jew a shliach has never been more attainable.

Launch an “Ambassadors of Light” campaign in your community today. Visit cypambassadors.com/light for more information and resources.