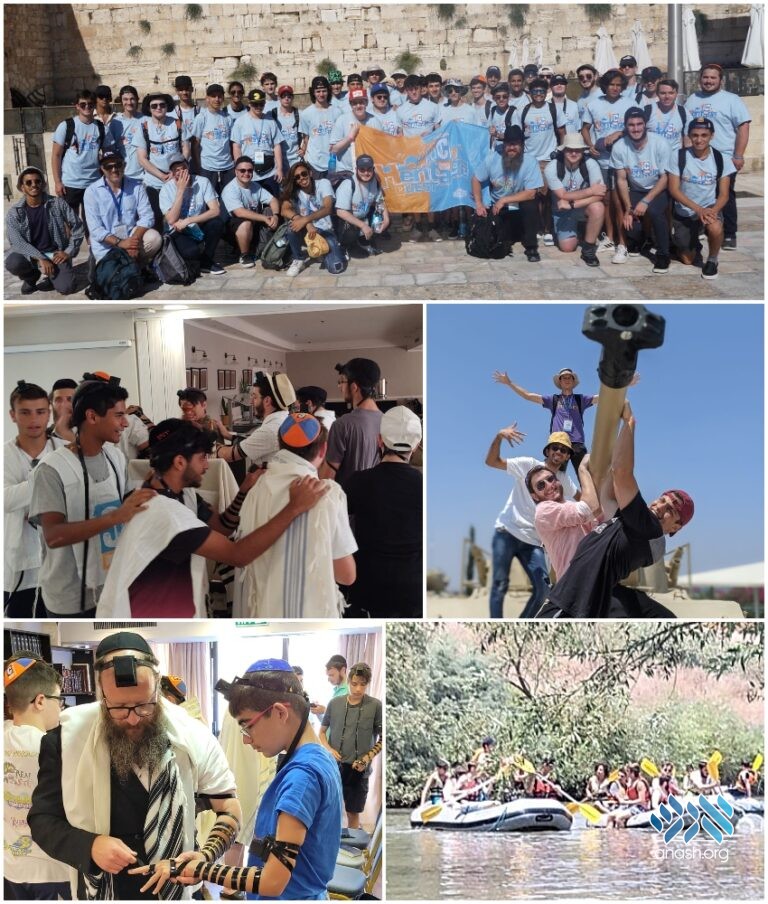 With three different travel programs already on their roster, CTeen International is set to add a fourth program for high school teens for Summer 2022.

With three different travel programs already on their roster, CTeen International is set to add a fourth for Summer 2022. CTeen Israel Journey will take Jewish teens who attend public high schools on a 22-day journey through the history, culture, and character of the Jewish People and Israel. Organizers are expecting hundreds of teens to join CTeen’s Israel programs during summer 2022.

The Israel Trip announcement comes after CTeen, the world’s largest Jewish teen network, pulled off two successful trips to Israel this past summer despite COVID conditions and the Hamas-Israel war last spring. “The fact we were able to go was a miracle,” says CTeen’s Summer Program Director, Rabbi Nachman Rivkin.

Over the past eight years, CTeen has created three successful travel programs; The fourteen-day CTeen Xtreme US-based travel camp, a network of local two – to seven-day Road Trips, and the twenty-two-day Heritage Quest to Poland and Israel. After having to cancel all programs but the Road Trips for summer 2020, requests were coming in from CTeen chapters around the world with regard to 2021 plans. CTeen Xtreme was set to go ahead, but with so much uncertainty about international travel, Rivkin and his team were unsure whether Heritage Quest could happen. Nevertheless, they opened registration at the end of November 2020, with a one-dollar, risk-free process for teens to sign up. By the end of the first week of December two-hundred-and-forty kids had signed up.

With such an enthusiastic response from CTeen Shluchim, organizers started to plan. The six days in Poland seemed attainable, with the proper structure of covid testing before and after travel, but getting into Israel would be more difficult; They were only allowing tours to enter on educational visas, which mandated a minimum of three weeks in Israel. So organizers changed the program, instead of going to Poland they would spend all twenty-two days in Israel. Albeit modified, the Heritage Quest trip could go on.

Then in the spring, Hamas ramped up their rocket attacks on Israel, prompting an Israeli response and as the war went on, teens began to withdraw their Heritage Quest applications. Nevertheless in June, CTeen landed in Israel with enough teens to fill a girls’ bus and a boys’ bus. Each group was joined by three Israeli CTeen kids.

The groups took parallel tours, climbing Masada, visiting Yad Vashem, talking to army officials at the Lebanon border, Holocaust survivors and educators at Yad Vashem, and Israeli locals on the streets of Jerusalem, Chevron and Tzfat. They combined outdoor adventure with spiritual visits and historical tours, all infused with CTeen’s signature blend of fun, approachability and nurturing of Jewish pride, giving these teens from public school backgrounds, many of whom are one of only a few Jews in their school, or even their town, three weeks surrounded by and infused with Yiddishkeit. As one parent said, “There are not enough words to describe how wonderful CTeen Heritage has been for my daughter. She’s feeling closer to Hashem and more comfortable and confident in everyday life living as a Jew in a fairly secular town.”

Mrs. Sarah Sherman, CTeen Heritage Quest’s program coordinator, led the girls’ group. “Essentially, during the trip, we give the teens a buffet of what Yiddishkeit has to offer and invite them to take on whatever they are ready for and take ownership of their relationship with G-d,” she said.

She used these same words at an impromptu Bat Mitzvah held when the group first visited the Kotel. Eight of the girls participating in Heritage Quest who had never celebrated their Bat Mitzvah asked that they be “Bat-Mitzvahed” at the Kotel. After a full day of touring, the group arrived at the Kotel and Sarah called the eight up to stand in front of their friends. She explained that whether we celebrate, or not, on the day she turns twelve a Jewish girl becomes responsible for her Judaism, “but now standing here, each of you is making a conscious decision to enter into a relationship with G-d,” she ended. The girls were clearly moved and each took on a mitzvah resolution before the group broke out in song and dance, joined by many onlookers, some of whom couldn’t hold back tears.

This opportunity for spiritual growth and Jewish connection is the reason Chabad of Mequon’s Rabbi Moshe Rapoport is such a strong believer in the need for these trips for high schoolers. Rapoport, a veteran Israel-trip leader, led the boys’ trip. “We can give kids classes and lectures, but when you engross them in a 24/7 yiddishe atmosphere and not just in Iceland, or Alaska, but in Israel, they come to see that everything they learned in Hebrew School is alive and real,” he says.

And, he says, the effects were immediately seen. One boy, who didn’t have his own tefillin, asked the rabbi to borrow his tefillin every time they were in a public venue so he could offer passersby the chance to do the mitzvah he had just learned to do. Many participants handed their phones over to their leaders for Shabbos so they could keep it properly, and on their return, parents sent feedback of kids washing negel vasser, saying brochos and taking steps to kasher their homes, or looking for opportunities to further their Jewish education.

In the words of a grateful mother, “We always knew that the seed of Judaism was within our daughter, but the CTeen Heritage Quest was the sunlight and water that seed needed to blossom and grow.”

After such a successful outcome and with funding available from the RootOne initiative, which is set to be the high school version of Birthright, CTeen has decided to make CTeen Israel Journey a permanent offering for the future. Heritage Quest will return to its original Poland-then-Israel structure, while CTeen Israel Journey will offer a more immersive Israel experience. Organizers are ambitious and confident, “Spending time in an accepting environment where you are free to be yourself and experience your heritage in a fun and exciting way is so powerful and refreshing for teens in today’s day and age.” says Rabbi Mendy Kotlarsky, vice chairman of CTeen, “The goal is to reach as many teens in our network as possible and give them the gift of a summer with CTeen,”