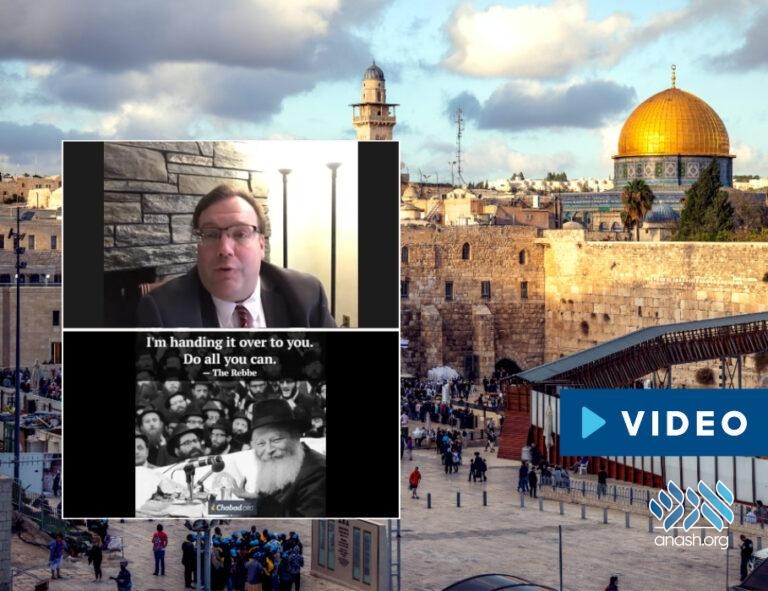 This past week, Crown Heights Women for the Safety & Integrity of Israel held an online event discussing the upcoming elections in Israel and how the Rebbe’s views of shleimus ha’aretz would reflect on the parties running.

By Tamar Adelstein, Coordinator -Crown Heights Women for the Safety & Integrity of Israel

Earlier this week, Crown Heights Women for the Safety & Integrity of Israel broadcast a second event in its on-line series called Security and Sovereignty Over the Land of Israel.  Our first program featured prominent speakers and activists engaged in bringing the Lubavitcher Rebbe’s message for true peace to fruition in word and deed.

This time Rabbi Mendy Mirocznik, executive vice president of Igud HaRabbonim, the Rabbinical Alliance of America joined us for an in-depth discussion about the Halachic (Jewish Law’s) priorities concerning security and sovereignty and how they reflect in the upcoming Israeli election which is scheduled for next week on March 23rd.

We covered a wide range of topics from the way in which Halacha views the State of Israel and its administration to considerations in choosing whom to vote for to Jewish Law’s response to terrorism to Israel’s diplomatic relationship with the United States and others.

Interspersed throughout the discussion was the Rebbe’s incisive analysis and approach towards security and sovereignty in which the Rebbe reiterated the principal Halachic foundations for the State of Israel which are Shleimus HaAretz (territorial integrity) and Pikuach Nefesh (protecting Jewish lives).  Jewish Law requires a Jewish community to come together to form a framework to protect and save Jewish lives from danger; in the State of Israel that is its government.

We asked Rabbi Mirocznik why the Rebbe often used the expression Shleimus HaAretz, Shleimus HaAm and Shleimus HaTorah in that order.  Wouldn’t it make sense, we wondered, to begin with the Jewish People and the Torah being united first and then focusing together on making the Land of Israel intact?

The answer is an important one that reflects the entire Chassidic weltanschauung going back to the holy Baal Shem Tov whose Ahavas Yisroel, love for his fellow Jews, was legendary.

At a time when the Jewish People were terribly downtrodden by the Chmielnicki pogroms, grinding poverty and the Shabbatai Tzvi debacle, the Baal Shem would first seek ways to relieve their physical plight and then closely follow by reviving their ailing spirit.

True peace, then, must begin, in our time, with Shleimus HaAretz – ensuring Jews are safe, secure and stable in Eretz Yisroel, the Land of Israel.

Thus, whoever leads the State of Israel and serves in the Knesset must be willing to publicly say this and demonstrate their commitment to Shleimus HaAretz and Pikuach Nefesh.  Like the Rebbe said, “Giving away security and land is non-negotiable!

We asked about the Joint Arab List, which is the third largest political faction in the Knesset, and which supports terrorism, Hamas and Hezbollah.  The Arab Joint List was appointed by Blue and White last year to the Knesset Welfare Committee which is tasked with overseeing services to wounded and disabled IDF and terror victims AND also charged with confiscating PA Slay to Pay salaries to terrorists and their families.

Halacha’s answer is unequivocal: appointing the Arab Joint List to such a committee contravenes Jewish Law.

To quote Rabbi Mirocznik: “Empowering a fifth column that supports terrorism, Hamas, Hezbollah and BDS is no better than appointing a wolf to be the shepherd or the lion to be the zookeeper!”  Indeed, the silence and inaction by Knesset members to prevent their appointment is shameful and is a threat to all decent people in Israel whether Jewish, Muslim or Christian.

We brought up the on-going saga of Malki Roth’s parents to bring Achlan Tamimi who masterminded the August 9, 2001 S’barro pizza shop bombing in which Malki, HY”D, died.

Tamimi was released in the Gilad Shalit swap in 2011 and repatriated to Jordan where she has since used every opportunity to incite further violence against Jews.

U.S. law provides for the extradition of terrorists who murder an American citizen on foreign soil to be brought to justice in the United States.  Despite signing an extradition treaty with the U.S. in 1995, Jordan has refused to acknowledge it or turn Tamimi over.

Our question was as follows:  Since Israel also signed an extensive peace treaty with Jordan in 1994, al pi Halacha – according to Jewish Law – may the State of Israel continue in its so-called friendly relationship with Jordan, and, thereby, let it get away with the argument:  Press Jordan and any other country Israel has a treaty with on matters like these and the sky will fall!  Rock the boat and peace might be lost at the border; the Oslo Accords, the Deal of the Century, The Abraham Accords, the Two-State Solution could easily disband and then what?!

Rabbi Mirocznik responded first by saying that American citizens should use every opportunity to press American public officials for Tamimi’s extradition.  He pointed out that the Rebbe expressed concern about Israel taking foreign money and aid and that it was better for the State of Israel to rely on HaShem’s help and stand on its own two feet.

Pikuach Nefesh is paramount and not something to play around with.  A bad deal can and should be reevaluated and redone or dropped as needed to ensure that Jewish lives are protected, and justice is served.

With regards to Halacha’s position to the proposed revival of the ancient Silk Trade Route that would link the Gulf States to ports in Haifa and Ashdod by a central free trade zone in the Jordan Valley and to the efforts being made in creating functional peace in Judea and Samaria, Pikuach Nefesh must be the foundation these kinds of endeavors.

It is our sincere hope that readers will take the time to view the program in its entirety and also to open the attached Resources of Interest that follow on the Thank You page.

We hope that the candidates running for office will align their goals with the Torah, Halacha and, of course, the Lubavitcher Rebbe’s directives for security, sovereignty, and true peace.

To view the recording of the full program, click here: https://youtu.be/h9iXmqbeMCw