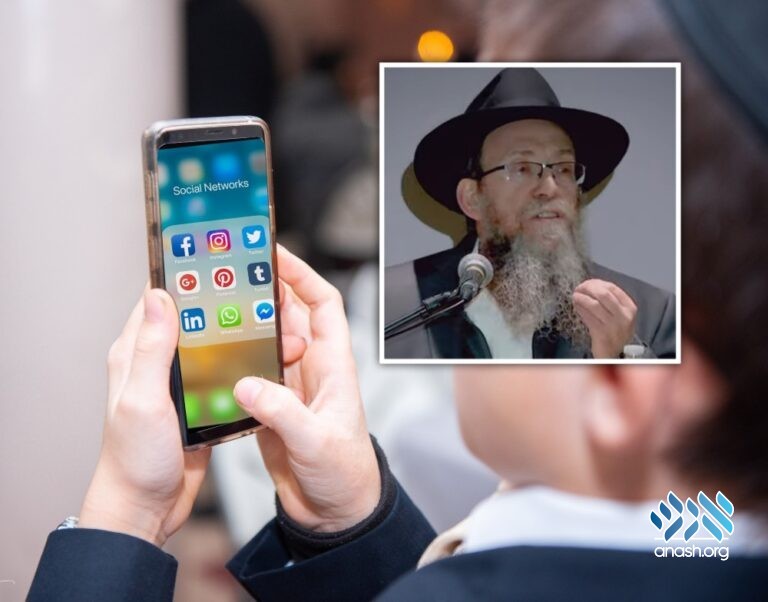 A recent event for Crown Heights mothers addressed the effects of technology on their children, describing the battle for their kids minds and hearts. During his address, Rabbi Dr. Yosef Shagalow shared a shocking study about the effects of devices.

Recently, mothers of Crown Heights braved the cold for what’s most important to them. Their kids.

They talked about technology, the internet, cellphones. They heard from the professionals, the moms, and even the kids themselves!

The evening commenced with greetings and blessings by Mrs. Gitty Rappaport. Gitty set the tone for the night, by dipping the conversation into her own journey within this topic and how joining a M.U.S.T. (Mothers Unite to Stall Technology) class pact has affected her home.

A video was shown in which the Rebbe clearly elucidated just how vital it is for parents to show up authentically for their children. “The young generation is growing up… they aren’t waiting for anyone. […] Every moment that they grow demands ‘real-time’ guidance and direction so that they will know how to behave the next moment. If you are not there for them, they will lack the immediate direction they need now. If it is put off until tomorrow or the day after, if they are left to their own devices today, then tomorrow will already bring the next stage of their education, and there will be no time to make up what they needed to learn first, today.” In addition, the Rebbe encouraged that, “The best way to educate [them], is to provide a living example.”

Rabbi Dr. Yosef Shagalov was invited aboard to bust a few myths. He clarified that the battle against the internet is not just within our children’s playing field. Indeed, this challenge is just as intense, if not more, for us adults as well. In truth, there can’t be a more naive statement than, “it won’t happen to me!”. The influence of technology does not spare any religion, society, or culture. In this era, it has infiltrated nearly every community and household.

He shared a shocking study: Due to device usage, children these days spend less time outdoors than inmates in a maximum security prison.

How awful. Where have we fallen and how can we save our children?

Shagalov stressed just how crucial it is to be present in our child’s life, and constantly feed the connection so that if they do ch”v encounter inappropriate material on the web, they will hopefully come to us. Additionally, Dr. Shagalov pointed out that a child cannot be expected to set their own limits on devices that are professionally programmed to be addictive. As parents, we must institute and enforce technology guidelines in our homes.

Shagalov concluded by encouraging his audience, “Don’t wait around for us [fathers]. If anyone can get the job done it’s you, the mothers.”

Mrs. Simi Polonsky-Hoffman of @theFrockNyc runs a successful clothing line, together with her sister Chaya Chanin, and for years employed Instagram and social media to market her mission and work. She instantly captivated the crowd when she walked onstage, mimicking a scene in which she was too busy with her phone to actually speak to the crowd in front of her.

She described what a cell phone addict looks like. And with incredible honesty admitted, “That’s me. I am the research. I’m the adult version of that girl who doesn’t feel good after they don’t get enough likes on Instagram. I’m the woman who finds it impossible to put it away. I’m a product of the smartphone algorithm.” She eloquently encapsulated it as such: “Why do I think I can successfully limit my child’s smartphone usage, when they have no concept of me limiting my own?” She explained how together with her sister Chaya Chanin, she had made an informed decision to take a step back from social media.

Perhaps most notable of all was when Simi announced a new hachlota to lock her phone away from 4-6 pm. This was met with enthusiastic applause. As a matter of fact, inspired by Simi’s resolution, many others have done the same.

The night concluded with a line up of ten Tech Talks. Women of varying ages spoke about the changes they were making in their relationship with technology. Bella Hershkop, an 8th grade student bravely shared that although she’s normal and wants a phone with WhatsApp just like girls her age, she knows it wouldn’t be good for her. She asked her mother to please stay strong and even when she nags, not to give in. She got a standing ovation.

If you want to get involved with MUST, please reach out to [email protected].