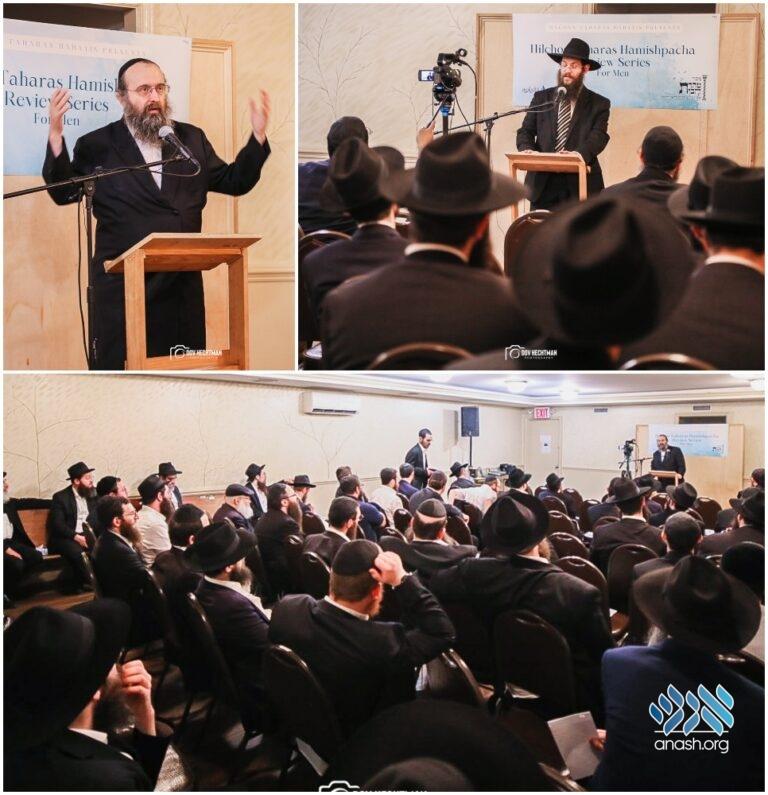 Men from the Crown Heights community gathered on Thursday night for the first shiur from Machon ‘Taharas Habayis’ with Harav Yosef Braun. The topic of the class was ‘how to ask a shaila‘.

Over 100 yungeleit, joined by another 500 virtual participants, gathered Thursday night for the first shiur in a new series on Hilchos Tahara.

The shiurim, organized by the recently established ‘Machon Taharas Habayis’, are meant to serve as a refresher course for men in the vital halachos of taharas hamishpacha.

The first shiur, titled “How to Ask”, was given by Harav Yosef Yeshaya Braun, and focused on the proper way of presenting a shaila to a rov.

The event began with greetings by Rabbi Mendel Yusewitz on behalf of Machon ‘Taharas Habayis’.

“Our Parsha begins the Mitzva of ‘Kedoshim Tihiyu’ -be heilig– and is followed by the mivtza of respecting and honoring one’s parents,” he said. “This is indicative of the far-reaching effect and impact of Tahara in the present and on the home’s future!”

He then introduced the Rav and Mara D’asra Rabbi Yosef Yeshaya Braun. The Rav thanked the Machon and praised the efforts of Rabbi Tuvia Kasimov and Rabbi Yusewitz for this initiative as well as others underway.

The Rav shared many cases, while debunking misconceptions which may lead to grave mistakes ch”v. The Rav also shared many practical ‘real life’ scenarios which demonstrated the clarity one should have when calling a Rav.

He stressed the importance of keeping constant communication with your Rov and the necessity of reviewing halochos.

“This is the foundation to keeping the mitzvah,” he said. “Unlike many other mitzvos where we are educated from a young age, here it is not the case. Hence it requires much chazara“

“All left uplifted and inspired toward this vital mitzvah,” Rabbi Yusewitz said.

For a live link for upcoming classes, or for a recording of Harav Braun’s class, subscribe here: Tiny.one/THreview.