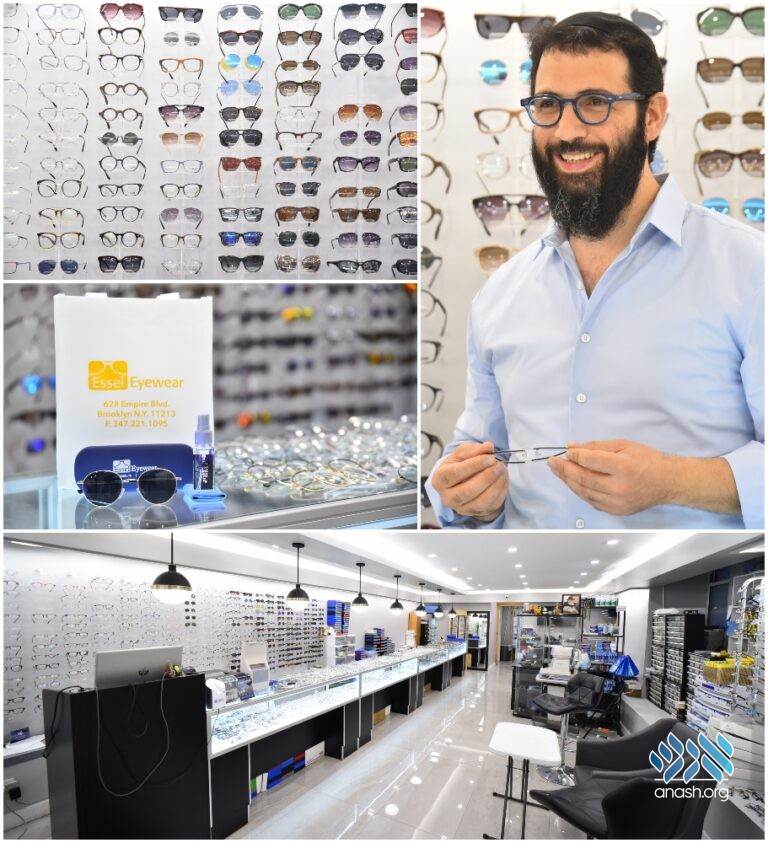 Community Snapshot: Over a decade ago, Sholly Levy of Crown Heights opened Essel Eyewear. What started off as a small store with a handful of customers is now a 1,300 square foot eyewear emporium, but the individualized customer care hasn’t changed.

Do you find yourself in need of a new pair of glasses? How about a simple repair? If you ask for a recommendation in Crown Heights, chances are you’ll hear about Essel Eyewear.

The store is located in a basement, but don’t let that fool you. The 1,300 square foot establishment has taken over what used to be three separate apartments. Half of the converted space is now a pristine, aesthetically pleasing retail showroom featuring dozens of styles; the other half hosts the wholesale side of Essel’s business.

London-born Sholly Levy didn’t start out as an entrepreneur. He began working with glasses in 2001, answering phones and interacting with customers at a store in Williamsburg. He began with little knowledge in the field, but quickly devoted himself to learning the ins and outs of prescriptions, frames and lenses, and got to know the doctor on premises. Within four years, he was promoted to store manager.

“Several years in, I realized I would have to find something that could sustain my growing family,” Levy said. “I was at a trade show and I saw glasses being displayed by some manufacturers from China. After speaking to them, I opened a small corporation and made my first two styles.”

After he had been manufacturing and selling glasses wholesale for some time, Levy realized there was significant money to be made in retail. He decided to open a small store in his basement.

“We started with just a handful of customers who would come during the few hours a week that the store was open. Slowly but surely, as I gave good customer service and people were happy with my work, I started to break away from my old job, cutting down on the hours I spent there to increase the hours at my own store. In 2013 I left the job completely and opened my store full time.”

Levy doesn’t see his success as a rarity; he believes that with a strong work ethic and a desire to provide for one’s family, most people can succeed.

“A lot of people struggle with this,” Levy said. “They get married and they’re not teaching or moving on shlichus, but they’re not sure what they want to do. Suddenly, their family is growing and they have to support them, so they get a job working for someone else’s business. That’s not a long-term plan.

“People think that if they don’t go to college, they won’t make it out there. But there are so many yungeliet who get into a business and learn how to grow it to the next level. You have the Aibershter on your side.”

At the same time, Levy says, a person has to keep his eye on the truly important goals.

“A Lubavitcher yungerman wakes up in the morning and his first priority is to go to mikvah, daven shacharis and have a period of learning before he goes about his day. In the evening, he goes to maariv and has another shiur. Of course, he has to juggle this with being present for his family and his business. This is not an easy day, but the life of a chassidishe provider is not one of an ordinary man. There are pressures coming from many different angles, and he has to learn how to balance them.

“Sometimes people get carried away and money becomes the objective. As Lubavitcher chassidim, we might think, ‘this person is a shliach so he has to live a certain life; I’m a businessman so my situation is different.’ The truth is, we have to learn how to be on both sides. Being a chassid and being in business have to work hand in hand.”

The combination requires drive, discipline and the patience to learn and grow slowly. Sometimes, however, you have to take a leap.

As he prepared to open his store, Levy was struggling to come up with a name. He asked for help with ideas, and was told that it would take time to think of something. But Levy didn’t have time – he was raring to go, and he wasn’t going to let this hold him back. He took his initials, SL, and made a word out of it. And that’s how Essel became a household name in Crown Heights.

Nowadays, Essel is a full service center where you can choose from a sizeable selection of frames, bring in glasses for a repair, and even get your prescription checked – there’s a doctor on premises twice a week. You can count on great service, too; Levy makes customer interactions his top priority.

“There is a lot that goes into buying glasses,” Levy said. “Between prescriptions and eye issues, the process is more complicated than people make it out to be. It’s the only item that constantly sits on your face, so the frames need to be comfortable. And most people only have one pair, which means that for the next couple of years, this is going to be ‘you’! It’s important to get it right.

“Our focus is on accommodating the needs of the community. There is something for everyone, whether they’re looking for top of the line or something more affordable. We open our store twice a week in the evenings so we can accommodate people who aren’t available during the day. Choosing glasses can be a big deal, and people like to bring their sister, friend and aunt along to help them choose – we make that as convenient as possible.”

Next time you’re on the hunt for a new set of eyes, drop into Essel to see what they can do for you. And while you’re tending to the vision in your eyes, take a moment to reflect on the avodah only your mind can see: integrating the worlds of a chassid and provider.