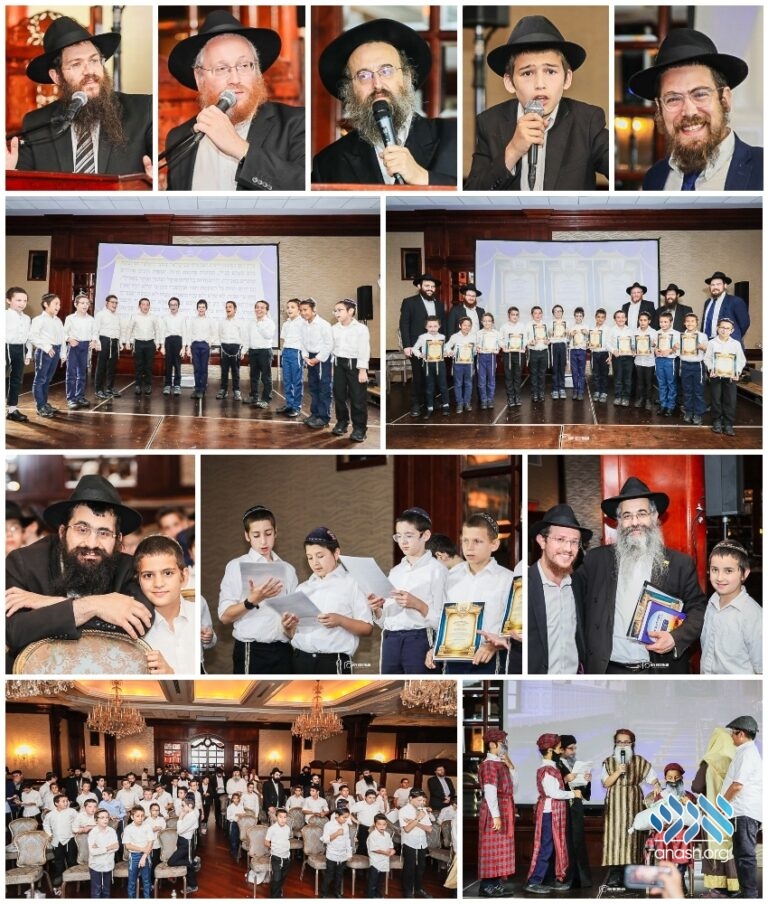 Fulfilling the Rebbe’s directive to continue classes into the summer, students at Cheder Ohr Menachem graduated on Thursday, completing a school year that lasted over 12 months.

Every boy deserves to shine. and at ‘Ohr Menachem’ of Crown Heights – they do! One of those times is at the end-of-year celebration. Every class comes up and presents a play, choir, production, craft etc. each boy is in the limelight.

The past Thursday was not only no different, quite on the contrary. Following full 12+ months (!) of learning with Chayus, the culmination was that much more special.

Fathers, mothers, and the graduating 4,5,6, and 7th grades gathered in the Razag ballroom for spectacular graduation. Of the chief Hanahala, Rabbi Zalman Goldstein opened the event by calling on the Menahel Kloli of Ohr Menachem and its continuum of mosdos Rabbi Mendel Hendel to read the Rebbe’s letter addressing the תלמידים המסיימים.

The first Kita to come up and present alongside their melamed Rabbi Dovber Bryski was Kita Daled Talmidim. They reaped a whopping success and reached the milestone of ALL the Talmidim completing 7 Prokim Tanya Baal Peh. After demonstrating their enormous achievement, the Menahel Rabbi Mendel Yusewitz presented each boy with his end-of-year certificate.

Also emphasizing the unique Shevach -praise chosen by his Melamed to define his unique light and addition this year to the class.

Kita Hey with Rabbi Yisroel Botnick followed. They did a fabulous job presenting a Shtikel of Gemora Hamafkid they learnt in a most enjoyable way: playing out the Gemora’s scenario while using the Aramaic words with Yiddish translation. They too received their certificates.

Next was Kita Vov. Rabbi Levi Belinov and his class inspired all with a “Hiskashrus Farbrengen”. Every Talmid presented his personal way in which his hiskashrus is expressed. Masterfully accompanied by selected pictures illustrating this Talmid’s Hiskashrus in real life! 3 Talmidim were celebrated on completing an entire Perek of Gemora by heart Shakla V’taria!

And finally… the graduating class for 5782… Kita Zayen!  (In cheder Ohr Menahcem, kita ches – since their bar-mitzva, they’re part of mesivta)

First, a valedictorian Hatomim Meir Wircburg represented all the graduates! He thanked his Melamdim throughout the entire cheder journey up to Rabbi Yisroel Greenberg and Rabbi Chanoch Hecht of Kita Zayen. Meir shared many anecdotes and experiences he and his chaveirim shared while growing through his Cheder years.

On behalf of the parents, Rabbi Yisroel Selwyn thanked the cheder for giving his 5 sons such a special Chinuch. He pointed out how lucky we are to have a real authentic shtetl life chinuch in the present day!

The culmination and the highlight of the graduation was seeing the Talmidim receiving their Seforim gifts for Tanya and Mishnayos Baal Peh.

All left uplifted as smiling talmidim eagerly look forward to next year in a higher kita, in Yerushalayim with Moshiach now!