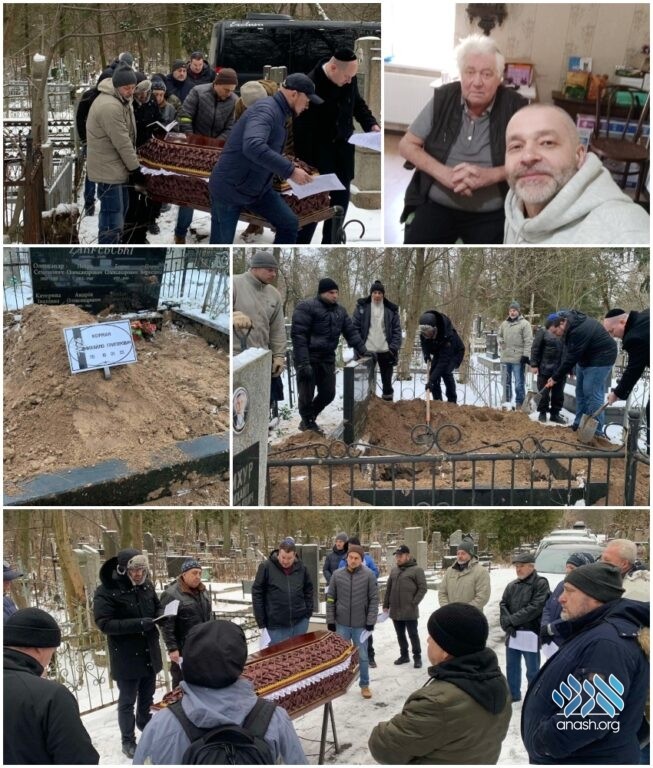 With Michael’s will stating that he wished to be cremated, and his children only agreeing to change that if an impossible-to-obtain plot became available, it seemed all hope was lost. But that didn’t stop Rabbi Raphael Rutman from trying.

Michael Korman was born 70 years ago in Kyiv, Ukraine. Born and raised during the dark period of communism, Michael was brought up with no connection to the Jewish community or a Jewish way of life.

The Federation of Jewish communities Ukraine (FJCU) has cared for all Jews in Ukraine for almost 30 years. Representatives often attempt to interest people in joining community activities. Michael Korman was approached several times by the FJCU, offering help or a connection to Judaism. However, even though his two children, Yulia and Alex, live in Israel, Judaism was very foreign to him, and he had no interest in anything offered.

Then, in February 2022, war broke out. Ukraine was under attack, and Kyiv became a very dangerous place to live. Yulia and Alex, living in Ashdod, Israel, tried to convince their father to flee to Israel. But Michael would not hear of it. He saw himself as a loyal Ukrainian citizen. How could he run away to Israel? And so he stayed in Kyiv to demonstrate partnership and solidarity with his neighbors and friends, and the country, where he had grown up.

The FJCU did not give up. They called, inquired into his well-being, offered assistance and offered evacuation. Although Michael did not agree to leave Ukraine, the sincere interest in his well being that was expressed made him change his mind. Now wheelchair-bound, he happily accepted the aid packages that the FJCU was offering. Every month he would receive boxes filled with food, toiletries and other basic necessities needed for survival during war time. Additionally, on Pesach, he received visitors who brought him matzoh and everything needed for a Pesach Seder. On Shavuos, he again had visitors who brought him books on Judaism. They came to visit again on Sukkos and helped him make a blessing on the four species. On Chanukah they brought him a menorah. By this time he was already sick, weak and bedridden, but he lit the Chanukah menorah with FJCU representatives, and they helped him lay Tefilin as well.

On the 19th of Tevet, Jan 12, 2023, Michael returned his soul to his Maker. In his will, he insisted that he be cremated and that his ashes should then be buried next to his wife Yelena, who had passed away about six years ago, and was buried in the Birkivtsi Cemetery in the heart of Kyiv. His children Yulia and Alex traveled to Kyiv to be able to fulfill his wishes.

The Birkivtsi Cemetery in Kyiv is full to capacity, and in general, they do not allow burials there anymore. Michael’s family had a plot in the cemetery, but it had already overfilled its capacity. In order to bury his wife there 6 years earlier, Michael had had to obtain special permission. He knew that there was no way that they would give further permission for him to be buried there, so his desire for cremation was the only way that he could think of to be able to be laid to rest next to his wife.

Rabbi Raphael Rutman, Executive Vice Chairman of the FJCU was informed of Michael’s passing, and that Yulia and Alex were going to have their father cremated, as per his wishes, the next morning. He knew immediately that he had to do something to avert this disaster.

Rabbi Rutman’s first job was to convince Yulia and Alex of the importance of a Jewish burial for their father and that under no circumstances could their father’s body be cremated. This was very challenging as they were adamant that their father’s last wishes be honored. After several very heated discussions, Yulia reluctantly conceded, but with the following challenge for Rabbi Rutman: “If you manage to get permission to bury my father next to my mother, then we will agree to stop the cremation.”

This task was even more difficult. Rabbi Rutman now had 14 hours, between 8 pm on Thursday night and 10 am on Friday morning, to get permission from the cemetery officials. It seemed like a completely hopeless situation, as there was no space in the cemetery. In the entire history of the cemetery, the authorities had never agreed to allow someone to be “pushed in” and buried there contrary to their regulations.

But Rabbi Rutman did not despair. He left no stone unturned in his mission to get the cemetery officials to agree to bury Michael near his wife. After many phone calls and much effort, he managed to achieve the unachievable. Approval was granted. Rabbi Rutman brought a Minyan of Jewish men to the cemetery and with snow, ice and wind, in minus eight degree weather, Michael Korman was laid to rest with Kaddish and a full, proper Jewish burial. At the service, the Deputy Director of the Birkivtsi Cemetery spoke and testified that, during his entire 30-year tenure in his position, such permission had never been granted.

Rabbi Rutman, who visited Yulia and Alex while they were sitting Shiva in Kyiv, expressed his gratefulness that he was able to help to fulfill Michael’s last wishes of being buried next to his wife. “Thanks to the FJCU, Michael Korman celebrated his last Pesach, Shavuot, Tishrei, and Hanukkah as a Jew. And we are very grateful and proud to have also been able to help bury him in accordance with Jewish law.”

Yulia is full of gratitude to the FJCU and to Rabbi Rutman. “My father was a brave man, a hero. We offered him a chance to come to Israel, but he insisted on staying in Ukraine. The FJCU gave my father the chance to live as a Jew in his last year. Every time we talked, my father would tell me about the Jewish people who visited him and gave him a taste of Judaism. If it wasn’t for Rabbi Rutman’s devotion and perseverance on behalf of another Jew, my father would have been cremated and not buried as a Jew. We will always be grateful for his efforts, and we are sure that G-d will reward him for the good deeds he did on our behalf.”