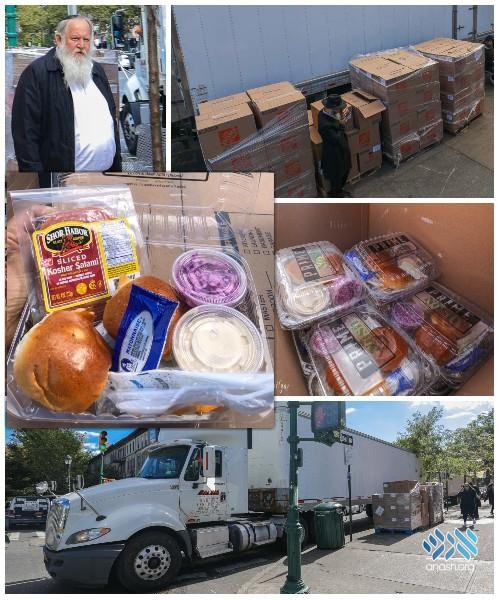 Every year, thousands partake in a grand Simchas Torah Kiddush outside 770, arranged by R’ Nochum Markowitz. This year as well, the Kiddush will take place in a creative fashion, to ensure health and safety.

One of the time-honored traditions of Simchas Torah in 770 is the grand Kiddush arranged by R’ Nochum Markowitz every year.

More than just a l’chaim and a bite to taste, the Kiddush is a grand operation, with full trailers of food being unloaded to feed the chassidim returning from tahalucha before they begin hakafos.

The annual Kiddush was encouraged by the Rebbe himself, who responded to reports of the Kiddush both verbally and in writing, saying that the Kiddush was a worthy endeavour.

As the years went by, it became an expected sight, with many locals, guests and bochurim knowing that could grab something to eat on Eastern Parkway’s service lane before dancing a whole night.

This year, however, the fact that the Kiddush would happen was far from self-understood. Doctors and Rabbonim have repeatedly requested that all kiddushim be put on hold, and the huge servings of herring, salads and meat would not sit very well with the community or health authorities.

But R’ Nochum wasn’t going to give up so fast. Instead of dropping the Kiddush, he came up with a solution to allow it to happen while still keeping to all health regulations.

Individually packaged ‘kiddush sets’ were ordered from a caterer, containing two rolls, a package of salami, and small containers of coleslaw and other salads. Each person will receive one of these packages, allowing them to partake in the Kiddush and eat something before begining hakafos inside or outside 770.

Already on Thursday, the huge trailers could be seen being on Kingston Avenue, unloading case after case containing thousands of kits, getting ready to feed thousands.