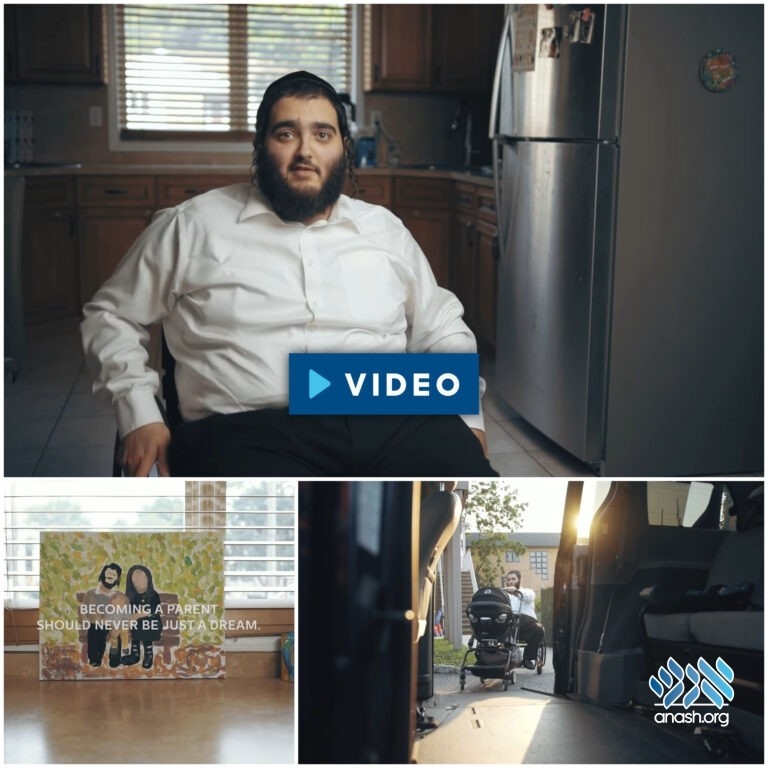 Despite their physical limitations, Avrumi and Chani Lunger dreamed of having a child of their own. Through the help of Rabbi Bochner and Bonei Olam their dream became a reality.

Growing up in the Chabad community of Argentina, Chani Lunger (nee Chein) knew there was something different about her.

Diagnosed at a young age with a rare muscular condition, Chani needed braces and crutches to be able to walk.

She remembers that as much as she tried to keep up with her friends during recess, the one time when she felt truly at peace was while making art. “I was able to use my imagination,” she says, “and express myself in my own way.”

As her friend began to marry, Chani began to realize that for all her imagination, the world saw her differently.   “There was one list for most people,” she remembers, “and another list for people like me.”

At the same time, in a very different community, Avrumi Lunger also knew there was something different about him.

Wheelchair-bound since a young age, Avrumi was also looking to start a family. “Growing up, I had amazing friends who always included me,” Avrumi remembers, “but this was something they couldn’t help me with, even if they tried their best.”

When the two were suggested to each other, their families wondered what the medical prognosis would be for their children.

Avrumi called up Bonei Olam, and none other than Rabbi Bochner answered the phone. “When he heard our story,” Avrumi remembers, “he promised to look into it and got back to us with an assurance that we could get married and begin a family.”

The two met and instantly hit it off. Chani remembers how Avrumi picked her up from Crown Heights, and how she immediately felt at peace. “There is something very special about meeting someone who understands you,” she says, “and accepts you for who you are.”

When their engagement was announced, Rabbi Bochner came to their l’chaim to celebrate and to give them a very special gift. “Whenever you have a question,” he told the soon-to-be groom, “please call me directly. I will stand alongside you throughout your case.”

It wasn’t too long before there was a new addition to the Lunger family, a baby boy Mottel named after Chani’s grandfather, the renowned Chossid Reb Mottel Chein, a”h.

You can partner with Bonei Olam today to help make every couple’s dream of parenthood come true Boneiolam.org/chabad