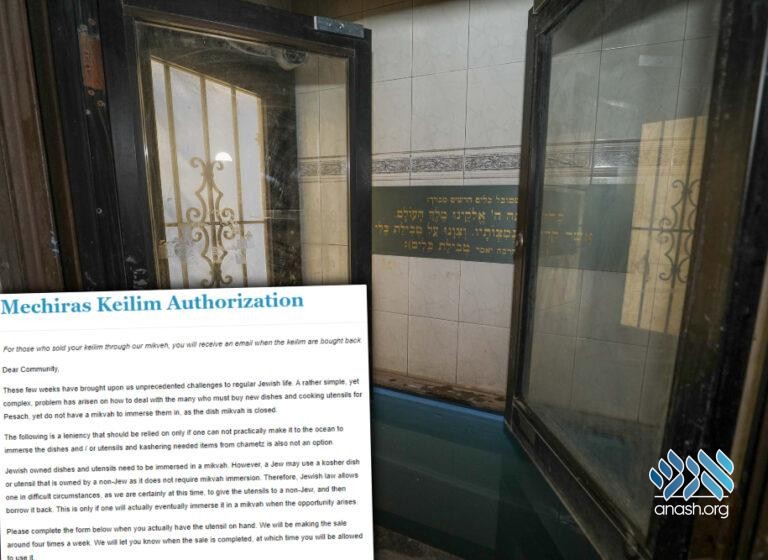 Before Pesach 5780, with keilim mikvaos closed, many relied on a temporary heter to sell their new dishes to a non-Jew. With Pesach once again around the corner, those dishes need to be toiveled.

A clever solution used before Pesach 5780 could cause Halachic issues for this Pesach, unless one takes some simple steps to avoid it.

As Pesach approached one year ago, the coronavirus pandemic was at its height. At the direction of rabbonim and doctors, shuls, schools and mikvaos were closed across the country, to prevent the spread of the virus.

But with the Yom Tov arriving, and especially as many families made Pesach by themselves for the first time, there were a large number of people purchasing new dishes, but unable to toivel them in a keilim mikvah.

So rabbonim came up with a temporary heter, which would allow people to use the dishes over Pesach, and then properly toivel them at a later date. The solution was Mechiras Keilim – selling new utensils to a non-Jew, thereby making it his possession which is then given on loan to the Jewish person.

The solution was a temporary one, and one that can only be relied on in excruciating circumstances, such as the one we found ourselves in last year. As soon as one has the opportunity, he must immerse the keilim in a proper mikvah.

A year later, with Pesach once again around the corner, many of those same dishes are being pulled out, having been packed away after Pesach last year, before the mikvaos reopened. The un-toivled dishes need to be located and toiveled before they are used again.

Rabbi Chaim Lazaroff of Chabad of Houston, who arranged a Mechiras Keilim, posted a reminder to toivel the dishes on social media. He also offered that those who sold their dishes through him, could contact him for a list of dishes they sold, to know which need to be toiveled.

“As there is some halachic debate and doubt regarding the requirement to make a brocha when you do toivel the dishes, it would be advisable to toivel these dishes along with a new dish that was not included in the sale,” he added. “This can be easily purchased at your local dollar store. If this is not possible, you may speak to your Rav.”