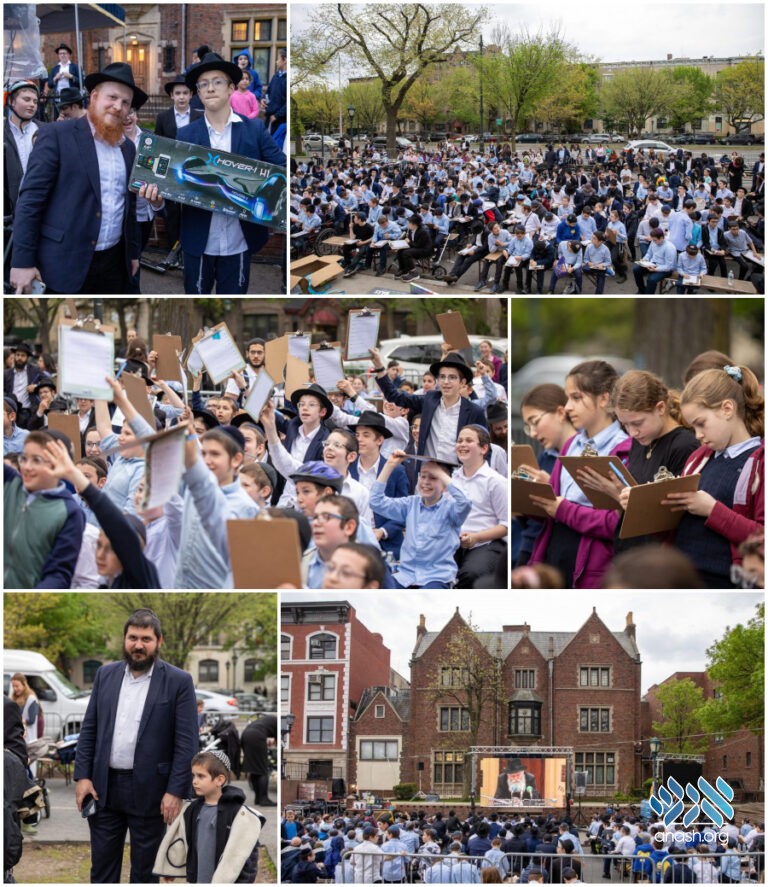 As Connection Point was preparing for their “Lag B’omer Parade with the Rebbe” event in front of 770 weather reports indicated there would be rain all day Thursday. But after a visit to the Ohel, the skies cleared up.

“What happens when it rains?” was the common question asked to Connection Point Director Rabbi Levi Plotkin.

Throughout the week, as Connection Point was preparing for their viewing of the Lag B’omer Parade 5744 in front of 770 – where the rally took place – weather reports indicated there would be rain all day Thursday. But the preparations went on, and everything was set in place for the grand viewing.

Wednesday night, on the pre-event Zoom call between schools and organizers, the “rain question” loomed largely. The weather channels said it would rain. The only question was, “how much would it rain?” But confident in the Rebbe’s Brachos, the planning continued.

Thursday morning, Plotkin headed to the Ohel. At the Ohel, he asked for the Rebbe’s Brachos that the program will go as planned – without rain. Interestingly, the organizers were told that the Parade the children were watching had the same issue – it was “going” to rain. But it didn’t.

Just across the Belt, dreary skies and all, Rabbi Chaim Loschak, Connection Point Production Manager, continued along with all the logistics and set-up of the event. “I didn’t take my umbrella,” said Loschak, as he hoped for the Bracha to manifest.

Thursday evening, at 6:15 pm, the benches started to fill up as the children readied themselves to watch the Rebbe video, answer questions, receive an ice cream voucher, and win amazing prizes.

The children zoned in, taking in each word of the Rebbe and watching some highlights of the Lag B’omer parade. “It really was a beautiful event,” said one principal involved.

Thanks to the Rebbe’s clear brachos, hundreds of children were able to experience and understand a full Lag B’omer Parade with the Rebbe – without the rain getting in the way.

The event was made possible by Osher & Rivka Karnowsky and Family in memory of their dear son Shmuel a”h.

Connection Point 5781 is made possible by Yossi and Nechama Dina Katz and Family.