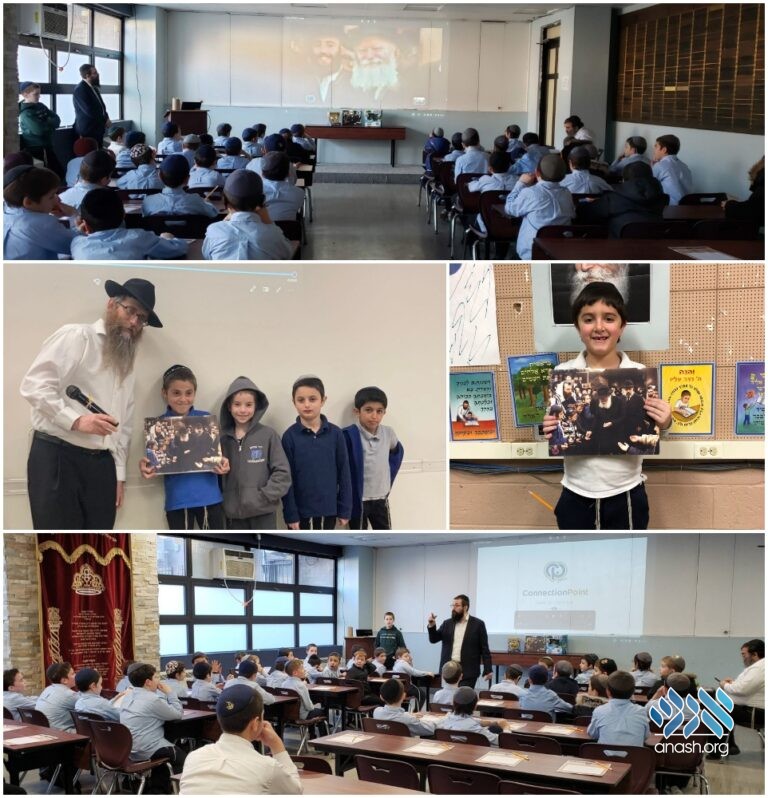 Over 850 students from sixteen schools across the country have already taken part in the inaugural program with resounding success and accolades.

“Connection Point enables the children to learn the Rebbe’s teachings in an accessible way,” explains Rabbi Levi Plotkin, producer of Connection Point and CPJ. “CPJ is meant for younger children to develop a familiarity with the Rebbe and to kindle a kinship, a feeling of pride and belonging. It makes the Rebbe part of their lexicon. It also ensures that, as they grow older, they can appreciate the Rebbe’s teachings on a whole new level.”

The three episodes that have been released thus far enable the students to connect to the Rebbe through different scenes and events in and around 770. The tour is led by children of similar age to the participants, makes the Rebbe more accessible, relatable, and approachable for every student. The narrative is tailored to show the students how they can learn and gain inspiration from the Rebbe. The endeavor is funded by Mendel and Reut Pinson in honor of the Rebbe’s children around the world, and by Mendy and Yocheved Wilhelm.

The short questionnaire at the end of each episode aids the children to focus on the lessons learned in the video.

“Connection Point Junior is giving our students a priceless gift by making Hiskashrus to the Rebbe so practical and accessible. The footage is top-notch, the child narrators make it so relatable, and our students are so engaged and excited during the program,” expressed Mrs. Blumi Mishulovin of Bnos Menachem. And what the children said really shows it,

“I learned that the Rebbe cared a lot about every person that walked by him and so I should also love every Jew,” wrote Mendel, a 3rd grader in Cheder Menachem.

“I saw how the Rebbe wanted everyone to do the mitzvah of tzedakah,” commented Batsheva, a second grader in Bnos Menachem.

“The program is designed to help the children relate to the Rebbe in a pnimiyusdike way, and in an age-appropriate way. Of course, our children hear about the Rebbe all the time, but CPJ aims to make the Rebbe a real part of their lives,” says Rabbi Elkanah Shmotkin, Executive Director of JEM. “The Rebbe will become familiar to them and they will relate to and develop Hiskashrus with the Rebbe more and more as they grow.”

Producer Rabbi Levi Feldman and production manager Rabbi Chaim Loschak are deep into planning for the second round of CPJ which will be available in the coming weeks. To be a part of this fundamental venture and have your school register for the CPJ, email [email protected].

Connection Point 5782 is made possible by

Schools Joining Round One of CPJ