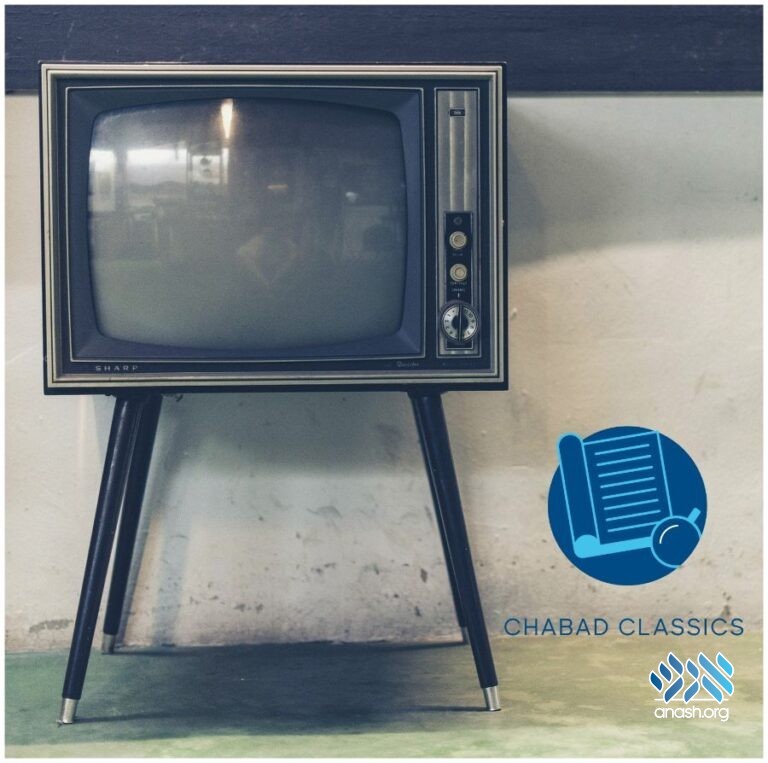 A mother shares how a well-meaning gift turned her family’s life upside down, and how they came to their senses in time to reclaim their cherished lifestyle.

As confided to Yaffa Leba Gottlieb

Now don’t get me wrong. We are a very frum family. It’s just that we had a TV in our house. A working one, too, but when I explain, I’m sure you will understand.

I mean, here was my great-aunt Julia giving us some of her extra furniture, and in the lower left- hand drawer of the dresser she sent us was this little TV. “Keep it!” she told us, “we have three others!” — So what were we going to do? Send it back?

Besides, there are reasons for having a TV. For one thing, the kids can’t learn all the time. They need a little relaxation, not to mention some relaxation for me. We were going on seven kids then — and just try to find a sitter for seven kids! And there are some educational things on TV, — nature shows, a little news. A few carefully selected programs, that’s just nice, convenient, inexpensive entertainment. And peace and quiet, for no TV could make as much noise as my seven kids.

Actually, I did miscalculate on a few points. For one thing, the children were so excited when they saw it — not just our children, but all the children on the block. The word got around fast, and pretty soon our house was jammed every day after yeshiva with kids who wanted to watch TV. Our kids had never been so popular. So much for my peace and quiet — the house was always mobbed.

But that was just the beginning. Parents began to wonder why their children disappeared into our house every afternoon. Then one of the mothers, a friend of mine too, called me:

“But the kids are watching it?!”

“Yes, but that children’s educational show had a commercial that advertised the late night movie…” and in a state of semi-panic she whispered unprintables.

Okay, so it can happen, but really that was rare. Usually they advertise innocuous things like kids’ cereals. Still, the next afternoon my ten year old said his best friend wasn’t allowed over any more because we had a TV. “Don’t worry,” I assured him, and called the friend’s mother.

“TV is the plague!” she exclaimed. “Turning on the TV is to turn off your brain and be hypnotized into becoming a goy!”

“There’s a middle road for everything,” I assured her. But she was insistent and closed-minded. “I’m sorry, Seenitte,” she said, “but I wouldn’t let my children put traife food in their mouths; I don’t want them to have traife ideas in their heads!”

Well, she always was the kind to exaggerate. Certainly the few moments we spend watching TV won’t affect the way we see the world. So I turned her off, and returned to my kitchen chores. While I was working in the kitchen, my four and five year olds came in singing. That was nice. I usually learn the latest niggunim from my kids.

Get you in the giggles!

Buy them for your breakfast!

“Does it have a hechsher?” I asked.

“Piggly says, Ha Ha Mmmm!” echoed my two year old, and before I could think of what to say, my eight-year old stomped in.

“Ma! I gotta have new sneaks!”

“You know!” he pointed at his sneakers, recently purchased at a neighborhood store. “These aren’t good! I gotta have SHPIDS!”

“Shpids are for kids?” I guessed.

So the TV was moved to a private place, to the adult room, beyond the undiscerning area of young children.

I didn’t know what she was talking about. My husband, I should add, really had no part in this whole thing. He is at work all day, has his shiurim at night, and wakes up early to daven. The TV didn’t affect him — he never watched it and barely knew it was there.

One night after the kids were finally in bed, I was relaxing after a very busy day, watching an educational drama. My husband came in, and since the show was interesting, we watched it together, until 2 a.m. He slept a little late the next morning, and so he prayed alone at home, rather than going to shul as usual. After that once in a while, he watched a show here and there. One program we both liked, so he would come home early from learning and we would watch it together. So what’s wrong with a little togetherness? It was nice, in moderation, of course.

About then I noticed something which I really didn’t pay too much attention to at first. I mean, every husband has a right to be pleased with his household, although my Shmuel had just never been too particular about these things. Yet one morning, out of the blue, he looked up at me after buttering his toast and inquired, “Is this the Better Spread?” At least I think that’s what he said, although I didn’t have time to answer, because it was the middle of the morning “rush hour,” when I am trying to get out five school-aged kids on their right three different buses.

During this time my husband is usually gainfully occupied, but this morning he just sat there, staring at the linoleum. “It just doesn’t have that Gleaming Shine,” he sighed disappointedly, adding also that our bathroom didn’t smell Springtime Fresh, nor were his shirts Powerhouse White.

So what was I going to say? I mean, I am just not the type to go out and indiscriminately buy brand X, unless it’s really cheaper, but still my husband continued to measure my housekeeping against these poetic images (Lemon Fresh, Sunshine Bright, Naturally Pure). And sometimes he would even look at me and shake his head. Still, I just thought that something was not going so well at his work, and that it would all just pass.

Little did I know. One night, about a week later, the whole thing came to a head. “Seenitte, I think we have to talk,” said my husband.

“Can’t it wait until the next commercial?” I asked.

“I don’t think so,” he said. He got up and turned the volume down.

“Me!?” I tugged my kerchief and checked the baby I was nursing to make sure I hadn’t inadvertently breached my standards of modesty.

“Darling, we just don’t seem to have anything in common any-more,” whispered the Educational Drama in the background.

We both stared at the screen, and suddenly I got the picture. In my mind I saw myself three and a half months after my 7th child, and still wearing maternity dresses (the longer styles which conceal varicose veins). Compare and contrast to those electronic visions before us, who have nothing to do besides demonstrate how to look five pounds thinner, and model stockings which never sag.

“What do you mean, you were thinking?” as if I had to ask.

“Well, I was thinking all kinds of things,” he said weakly.

“You know,” he continued, “These TVs can put a lot of things into one’s mind and make you want who knows what. But when I really thought, thought about what I really have, well, thank G-d, I’ve got what TV never dreamed of. I have great kids, and a great wife — I’ve got a good deal.”

And he took the little TV and threw it into the garbage so that its face got bashed in.Boruch Hashem. And I don’t want to think what might have happened if he hadn’t.