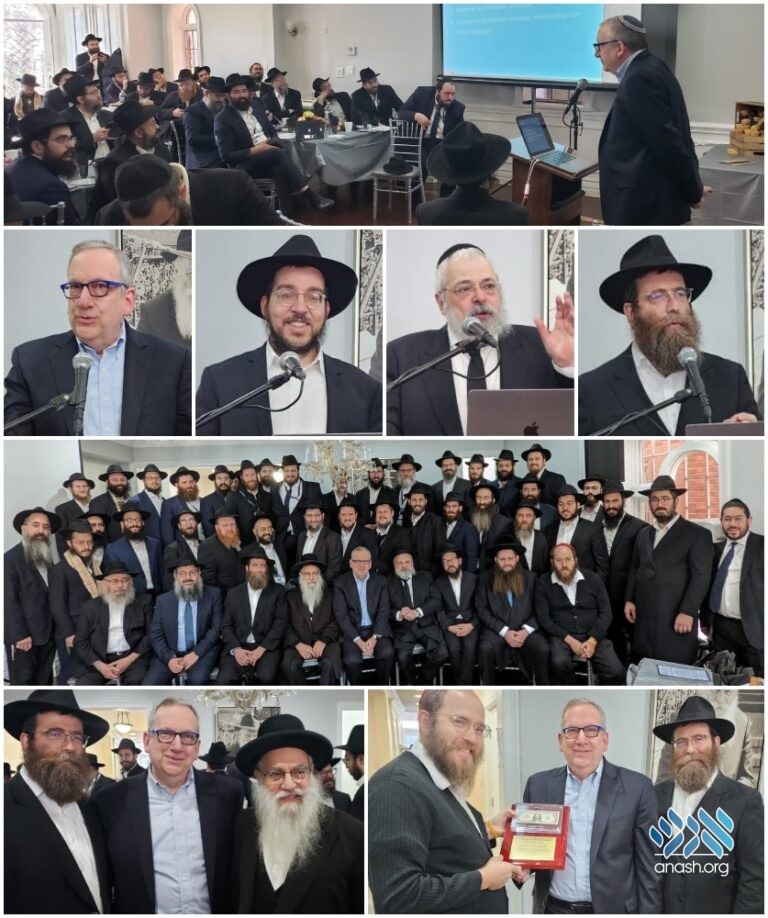 Mohalim from around the world gathered in Crown Heights on Sunday for an annual convention, where an award was granted to three medical professionals and a veteran Crown Heights mohel. The highlight was an actual bris that took place.

Mohalim from around the world gathered in Crown Heights on Sunday for an annual convention with brings together mohalim, rabbonim and medical professionals.

The annual convention is organized by Rabbi Levi Heber of the International Bris Association, a network and referral group for mohalim, together with Rabbi Yochanan Klein of Miami, Florida, director of Healing Hearts Bikkur Cholim.

Taking place during the Kinus Hashluchim, the convention gives the chance for shluchim who serve as mohalim to join alongside their colleagues. This year, being a Hakhel year, brought a larger-than-usual crowd.

A highlight of the event was paying tribute to veteran mohel Rabbi Eliyahu Shain of Crown Heights, who has been performing brissin for over 60 years, bringing a new standard of skill and professionalism to the holy work.

An award was also presented to Dr. Jeffrey Stock, Chief Pediatric Urology at Mount Sinai. In his position as a respected medical professional, Dr. Stock helps many parents and mohalim who have medical questions pertaining to brissin. The award, a framed dollar from the Rebbe. recognized his work to strengthen bris milah and the significant assistance he offers.

Awards were also presented to Dr. Avi Rosenberg, a physician-scientist and practicing renal pathologist at the Johns Hopkins University School of Medicine, who was in attendance, and to Dr. Avraham Polinger.

Addressing the event were Rabbi Yehoram Ulman, who discusses how brissin can affect birur hayahadus later in life, and various scenarios that could come up. Mohel Rabbi Yossi Shuchat of Los Vegas also spoke, sharing insights regarding Sefardic brissin.

The climax of the convention was an actual bris milah of man who had waited 20 years for his bris. Not having received a bris when he was born due to his father’s refusal, he finally received the bris thanks to the persistence of Paris Shliach Emanuel Taubenblatt, who kept on trying for nearly two decades.