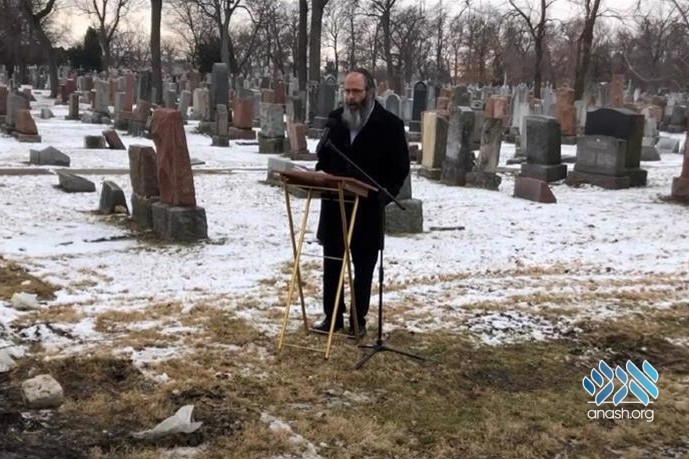 On a frosty morning in a snow-dusted Jewish cemetery, Jakob Messer was laid to rest among his people. A chain of kindness stretching from Chicago to Canada and back saved the elderly Holocaust survivor with no Jewish relatives from cremation.

Time is vitally important, especially when it comes to helping someone in a critical situation.

Living on the rough-and-tumble South Side of Chicago, it had been decades since Jakob Messer had been in contact with organized Jewish community life, which is mostly concentrated in the city’s northern sections.

A child Holocaust survivor, he had wandered far from the religion of his youth, having built a life for himself as a devoted husband, father and grandfather to a large non-Jewish family.

By now in his 80s, his health had taken a turn for the worse, and it appeared that his life was coming to an end.

A relative in Toronto heard the news and was concerned that Jakob’s non-Jewish family would not know to give him a Jewish funeral. The fact that money was tight made the chance of a burial—Jewish or non-Jewish—all the more unlikely.

He shared his worry with his local Chabad rabbi, Rabbi Levi Blau from the Jewish Russian Community Centre of Ontario, who reached out to my husband, Rabbi Yossi Brackman.

Jakob was receiving hospice care at home, and without immediate intervention, it would be difficult to stave off a cremation.

My husband promptly drove to the home to meet, comfort and speak to the family, hoping to share with them the importance and significance of a Jewish burial.

Rabbi Brackman was welcomed into their home and introduced to Jakob, who was lying in bed, surrounded by his family. His deteriorating body was covered in tattoos. Despite his weak state, he smiled warmly, still full of life, and was comfortable sharing whatever was on his mind.

In fluent Yiddish, Jakob spoke of his memories of a distant past, sharing how he was born in 1936 in Poland and was just a toddler when his mother passed away and the family fled to Russia in 1939 to escape the Nazis. With the help of his uncle, they emigrated safely to America and rebuilt their lives. Although he had strayed from Jewish observance, Jakob was a family man, devoted to his loved ones and community, and always eager to help in any way.

His wife described their dire financial situation, and it was clear that the $1,000 that remained in their bank account would not cover the burial expenses. To them, cremation was the only option.

Rabbi Brackman calmed their concerns and guaranteed the family that he would find a donor to cover the entire cost.

After the meeting, he shared his findings with Rabbi Blau.

Providing for the Expenses

The following Shabbat, a young member of Rabbi Blau’s congregation celebrated his bar mitzvah. After the ceremony, Rabbi Blau invited the remaining guests to join him around the table for an intimate farbrengen. He shared Torah teachings and stories, sang songs and offered inspiration to those who had gathered.

Without giving it much thought, he reflected on what had transpired over the past week: By Divine providence, a fellow in Chicago reached out to his brother, a member of his congregation in Toronto, for advice on how to help their cousin Jakob in Chicago have a proper burial. In turn, Rabbi Blau contacted my husband and asked him to visit Jakob.

Among the guests was a man named Ari Rosenzweig. He listened intently to the discussions. Early the next morning, he had planned a trip to Chicago for a Chicago Bears game. One of his friends, an executive at a Chicago Jewish funeral home, was going to meet him at the stadium.

Without much thought, he offered to enlist the help of his friend or even pay the entire sum of the burial expenses if needed. The chain of kindness was growing from Chicago to Canada and back.

Three weeks later, as we were preparing for Chanukah, Jakob passed away. We knew without a shadow of a doubt that Jakob was going to be buried with the utmost dignity and respect.

My husband called Ari to let him know that the time had come. He responded with overwhelming emotions. That day was the yahrzeit of his own grandmother, a Holocaust survivor, whose own parents had been cremated in the camps. He could not have imagined a better way to honor the memories of his grandmother and great-grandparents than to gift a Holocaust survivor with a proper Jewish burial.

Community members and students from the University of Chicago, where we run our Chabad House, came together to make a minyan.

And on a frosty morning in a snow-dusted Jewish cemetery, Jakob Messer was laid to rest among his people. He was escorted on his final journey by his family and volunteers who gathered to respect and honor another Jewish soul.

My husband recited Kaddish and arranged for the prayer to be said for the entire year of mourning.

May the soul of Jakob Messer (Yaakov ben Volf), a Holocaust survivor, and all our departed loved ones have a powerful elevation on high.