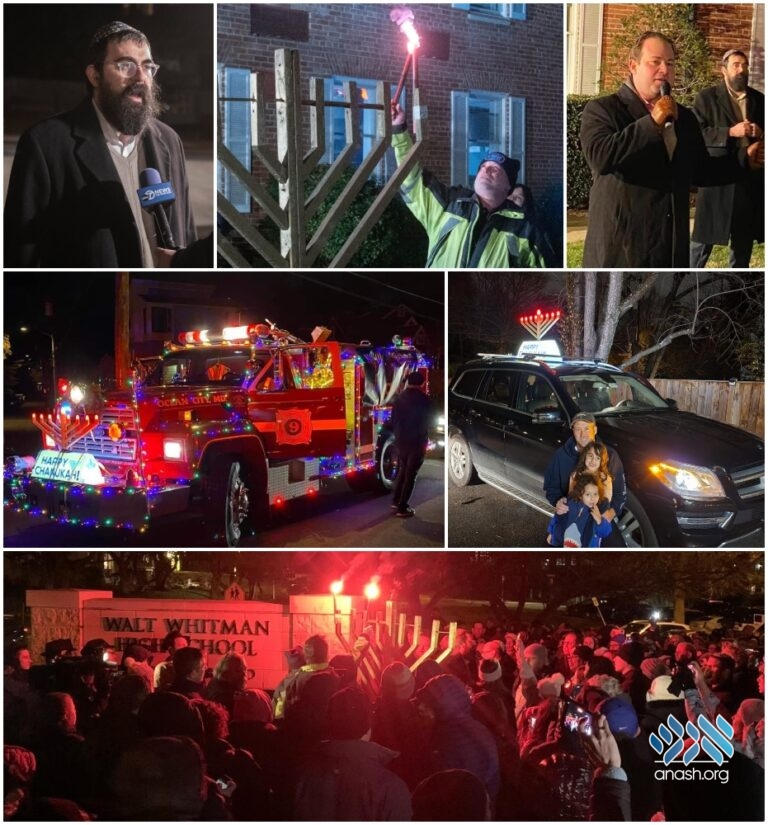 After antisemitic graffiti appeared in numerous locations in Montgomery County, MD, the shliach and locals responded with a joyous menorah parade that passed each of those same locations.

Hundreds of residents of Montgomery County participated in a joyful menorah parade organized by Chabad of Bethesda and Glen Echo Fire Department.

As the first night of Chanukah began, a long and joyous line of Menorah-bedecked vehicles driven by members of the Chabad community left from Glen Echo Fire Station with a fully decorated fire engine at their head, along with a number of other fire apparatus.

The procession made many stops along the way, in particular at the sites of the recent anti-Semitic graffiti that had shaken their neighborhoods. At each stop, the parade was enthusiastically greeted by large crowds numbering in the hundreds. Those in attendance expressed strong feelings of joy and optimism from this proud and positive response to the darkness of hate.

Rabbi Sender Geisinsky of Chabad of Bethesda, organizer of the parade along with Lt. Jane Callen from Glen Echo Fire Dept, shared how inspired he was by the turnout and celebratory reception.

“In speaking to the Lieutenant last year about organizing this parade, it was simply to bring the joy of Chanukah message to the neighborhoods that otherwise only receive the attention of the other religious holidays. When these horrific anti-Semitic events started to occur, we both knew that the purpose of the parade had a far greater significance,” he said.

Originally, the plan was to only light a Menorah at the site of the disgusting graffiti from a few weeks ago along the Bethesda Trolley Trail. However, when the news broke the day before Chanukah, that new graffiti was found on the grounds of Walt Whitman High School, Rabbi Geisinsky and Lt. Callen immediately set to work to change the route of the Parade and have it culminate at the school.

Last-minute notices were sent out and interest spread instantaneously. Elected officials and community and faith leaders from all over the county, came together in an incredible show of unity, solidarity, and optimism. In an inspiring Menorah lighting that took place just 24 hours after the graffiti was discovered, many hundreds gathered to proudly celebrate their Jewishness and bring in the joyous holiday.

The message sent by the joyous parade and powerful menorah lightings sent a message very much in line with the theme of Chanukah: That when threatened, the Jewish People do not cower in fear and despair but rather rise with Jewish pride and confidence.

“The Lubavitcher Rebbe would say that you cannot fight darkness with a broomstick,” said Rabbi Geisinsky at the outset of the parade, “rather you shine a light in the face of darkness, and light will always win! This was the secret of the success of the Maccabees and this will hold true now as well. Let us light our Menorahs and celebrate Chanukah joyfully!” The gathered holiday celebrants cheered.