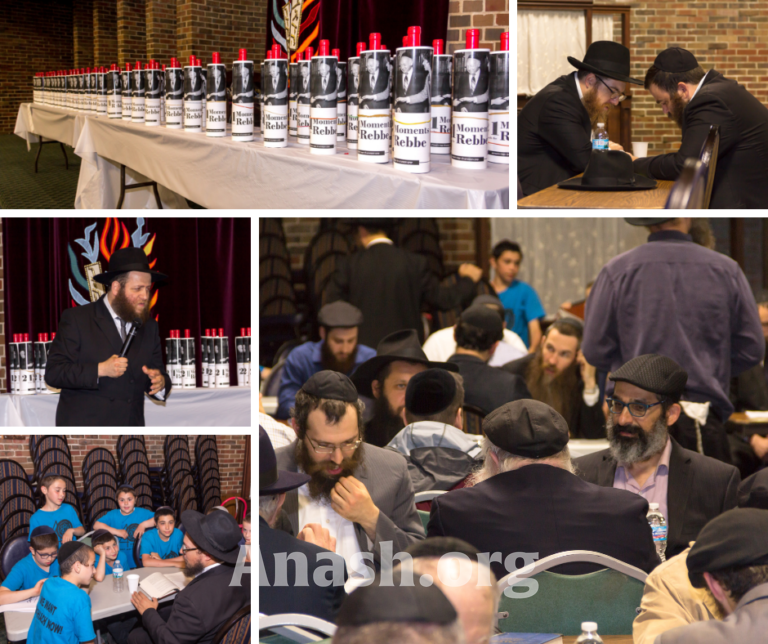 At the end of an inspiring evening spent learning the Rebbe’s maamarim, Chicago anash were given a bottle of wine and a kuntres to bring home for a family farbrengen.

On Tuesday night, close to 200 anash gathered at Congregation Bnai Ruven to learn the Rebbe’s Maamarim in preparation for Gimmel Tammuz. The evening, which was coordinated by Rabbi Baruch Hertz and Rabbi Moshe Markowitz, was part of the global effort to learn all of the Rebbe’s maamarim.

“As we come close to 25 years since Gimmel Tammuz, we have mixed feelings,” Rabbi Hertz told Anash.org. “The most important thing is to see the tremendous brochos that the Rebbe has showered upon us, and the incredible hiskashrus to the Rebbe of Chassidim today. Last night was a true testament to this commitment; it was very inspiring!”

The inspiration and energy did not end when the evening drew to a close. In order to encourage the participants to bring the atmosphere to their homes, each participant was given a bottle of wine and a special kuntres to share with their families during a family farbrengen this Shabbos.

The kuntres, titled “21 Moments with the Rebbe,” was collected from the Moment with the Rebbe section in the weekly Farbrengen publication. You can download it by clicking here.

“The effect of the event’s energy spilled over to the following morning. More people than usual came to shul for minyan, and people even stayed to learn,” said Rabbi Hertz.

Unlike the communities that are further away, a large contingent from the Chicago community will be traveling to the Rebbe tonight. Because of this, whereas most communities drew a raffle to choose one participant to represent them at the Ohel, in Chicago the drawing was for an all expense paid trip to Alma Ata for Chof Av. Rabbi Avrohom Kagan, shliach in River North, Illinois, was the lucky winner.