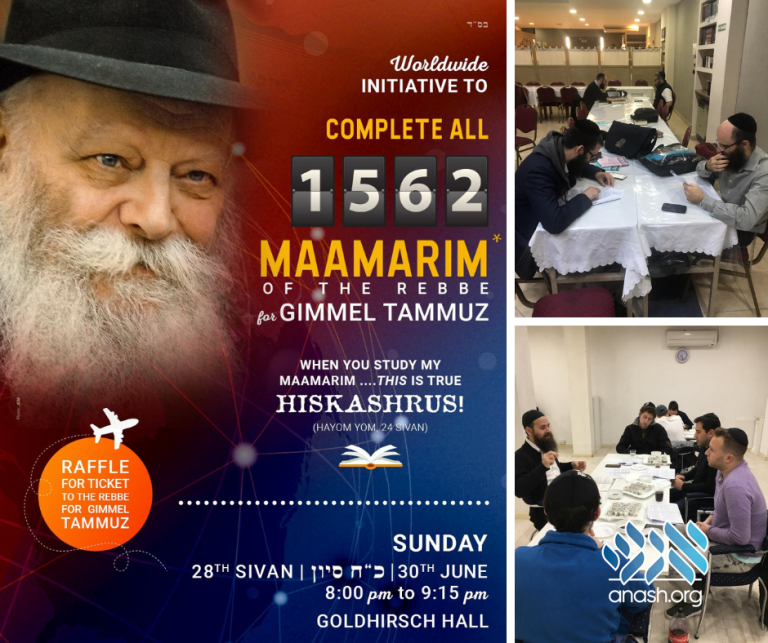 Anash communities worldwide are collaborating in an effort to have all of the Rebbe’s maamarim learned before Gimmel Tammuz.

In honor of 25 years since Gimmel Tammuz, a campaign spearheaded by Mr. Josh Goldhirsch of Melbourne, Australia has been launched in anash communities around the world. The goal? To have all 1,562 of the Rebbe’s maamarim learned by anash worldwide before Gimmel Tammuz.

Mr. Goldhirsch, an attorney who has a deep love of Chassidus, is working together with Rabbi Tzvi Altein of Vaad Hatmimim and Rabbi Yossi Kamman of the Chassidisher Derher. Together with global coordinator Rabbi Shmuel Lange, they have already gotten 25 communities from 20 different cities and 6 continents on board.

“I have had the zchus of learning Chassidus for 25 years,” Mr. Goldhirsch told Anash.org. “Over my journey, I have realized that Chassidus is an amazing gift that the Rebbeim have given us. It is practical and relevant to our day to day life.”

“Chassidus can seem counter-intuitive, the opposite of what the world tells you is right; over time, however, it changes your perspective, and you start focusing on spiritual achievements rather than material ones.”

Each community received a number of maamarim related to the number of participants they are expecting. They then scheduled a day of learning, inviting community members to find a chavrusa, choose a maamar and participate in the global effort. A campaign flyer was translated into four languages and sent around for each community to customize to its date, time and location.

Each community will be holding a raffle for all participants; the winners will be flown to New York for Gimmel Tammuz, where they will meet up with the representatives of each kehilla. Several communites have organized their own raffles; in New York, seforim will be raffled off, and one lucky member of Chicago anash will receive an all expense paid trip to Alma Ata for Chof Av.

“This year is 25 years since Gimmel Tammuz, and I really wanted to give a gift to the Rebbe,” said Mr. Goldhirsch. “I thought having all of the Rebbe’s maamarim learned worldwide would be a beautiful gift.”

In the Hayom of Chof Daled Sivan, the Rebbe writes in the name of the Frierdiker Rebbe that true hiskashrus comes through learning the Rebbe’s Torah. When we learn the Rebbe’s maamarim, we connect with the Rebbe in a personal and pnimiusdik way.

A Buenos Aires representative shared, “Baruch Hashem, we had 172 people participate in the learning today. We learned the maamarim of תשלט and half of תשיז. It was a great success!”

Following their day of learning, each community will send the global coordinator pictures of their event and a duch with the names of each participant.

Here is a list of participating communities and their coordinators:

To participate as an individual or to sign your community up, email admin@chassidus.com.au.