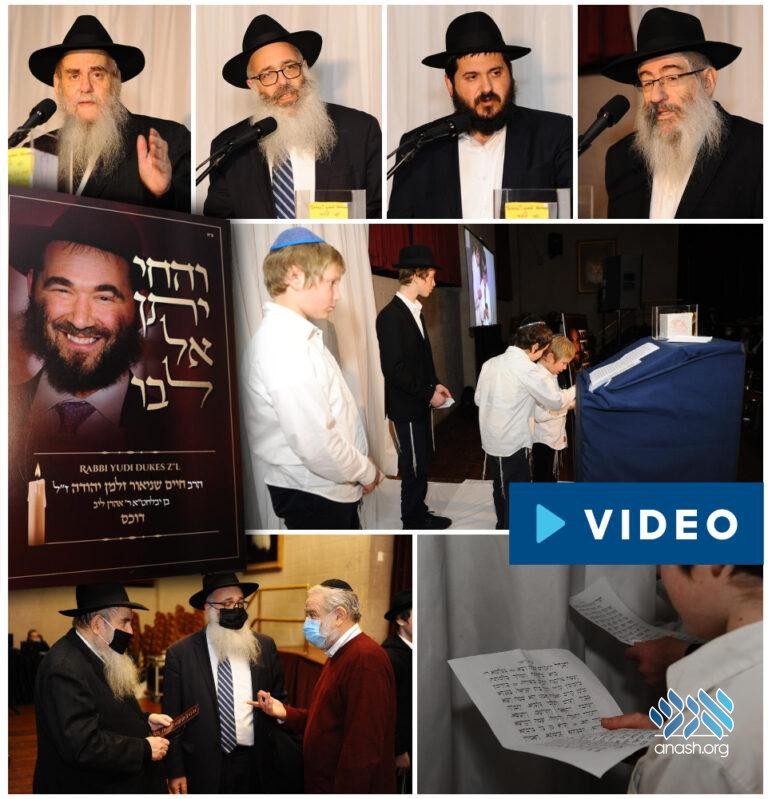 Close friends and colleagues of Yudi Dukes joined his family at an emotionally charged shloshim, where speakers remembered Yudi and vowed to continue his work and his legacy.

Speakers remembered Yudi and his singular care for another person, and vowed to continue his work and his legacy.

Emceeing the event was Rabbi Mendy Kotlarsky, director of Merkos 302, and close friend of Yudi and the Dukes family. The evening began with Tehillim led by Yisroel Dukes and birchas kohanim led by Mr. David Schottenstein.

Throughout the evening, Yudi’s family, colleagues and friends spoke about Yudi and how he inspired each of them in his own unique way. Whether with his friendship, his caring for another person, or through his shlichus in JNet, each person had a unique and special story to share.

Especially touching were stories from Yudi’s time in the hospital. The Jewish liaison to the hospital, a non-Jewish respiratory therapist, and others who first met Yudi when he was hospitalized, spoke of how his emunah and his fearless approach to every challenge left them inspired and with lessons they would never forget.

A special documentary film was also shown by the event, filmed and created by filmmaker Andrew Leibman, showcasing Yudi’s strength and cheerfulness during his months in the hospital, even as he faced the hardest of challenges.

A siyum on Mishnayos was made by Yudi’s son’s followed by their recital of kaddish, briniging tears to the eyes of participants. Yudi’s father-in-law Dr. Selwyn Spangenthal and brother Rabbi Dovber Dukes also spoke.

The event concluded with Yudi’s wife Sara Dukes presenting their children with a letter that Yudi had written to them a number of years ago. She also presented them with a tzedaka pouch that Yudi had fashioned for each of them while in the hospital. Inside the pouch were a dollar and coin from the Rebbe for each child, gifted by Rabbi Yehuda Krinsky.

A highlight of the event was the launch of the new Chavrusa4Yudi initiative, honoring Yudi’s legacy with 1,800 new chavrusas. Launched by JNet and Merkos 302, the initiative aims to fulfill a lifetime dream of Yudi’s, thereby continuing his work and perpetuating his legacy.