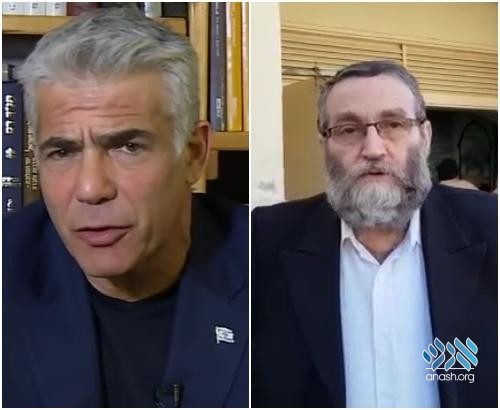 In an unusual display of bipartisanship, Israeli Knesset member of the Coalition and the Opposition united to support a vote nullifying tax exemptions for missionary groups operating in Israel.

One of the non-profit organizations, which goes under the innocent-sounding name “Together, Ramat Hasharon,” belongs to the Christian cult “Messianic Jews,” which uses a variety of ways to get Jews to convert out of their religion. At times it uses material inducements to lure minors, in violation of the law.

The second non-profit, “Zion’s Watch Tower,” also operates under false pretenses; in reality, is belongs to the J’s Witnesses cult.

Data provided by the Justice Ministry, which registers non-profits, made Rabbi Gafni suspicious that the two groups were in fact missionary cults. Staffers from his office contacted Yad L’Achim, the central body in Israel fighting missionaries, for more information. The evidence provided left no room for doubt that the two groups – seeking tax-exempt status for donations and breaks on property taxes – were indeed missionary cults.

Thanks to this evidence, as well as additional material presented to the committee, all 16 of its members voted against extending the tax breaks. This included representatives of all parties in the Knesset – Jew and Arab, right and left, coalition and opposition.

In opening the session, Rabbi Gafni declared: “These non-profits conduct missionary activities aimed at getting Jews to convert out of their religion, and we are against approving tax breaks for them.”

In a rare move, the head of the Opposition, MK Yair Lapid, agreed with Rabbi Gafni. “We are voting against missionaries who operate to get Jews to convert out of their religion. The Jewish nation has a right to protect itself and its children.”

During the proceedings, the committee gave representatives of the missionaries an opportunity to present their side of the story. They tried to deny that they run activities aimed at getting Jews to convert, but the evidence that had been presented to the committee was incontrovertible.

Rabbi Shmuel Lipschitz, one of the heads of the organization said: “We congratulate the Knesset Finance Committee and its chairman, Rabbi Moshe Gafni, for its unanimous vote to deny tax benefits to Christian missionary cults. We are witness to a Kiddush Hashem; a united front rose up against an attempt to undermine the foundation of the Jewish people. When it comes to opposing efforts to get us to convert out of our religion or to challenge our rights to live in our land as Jews there is a wonderful consensus.”