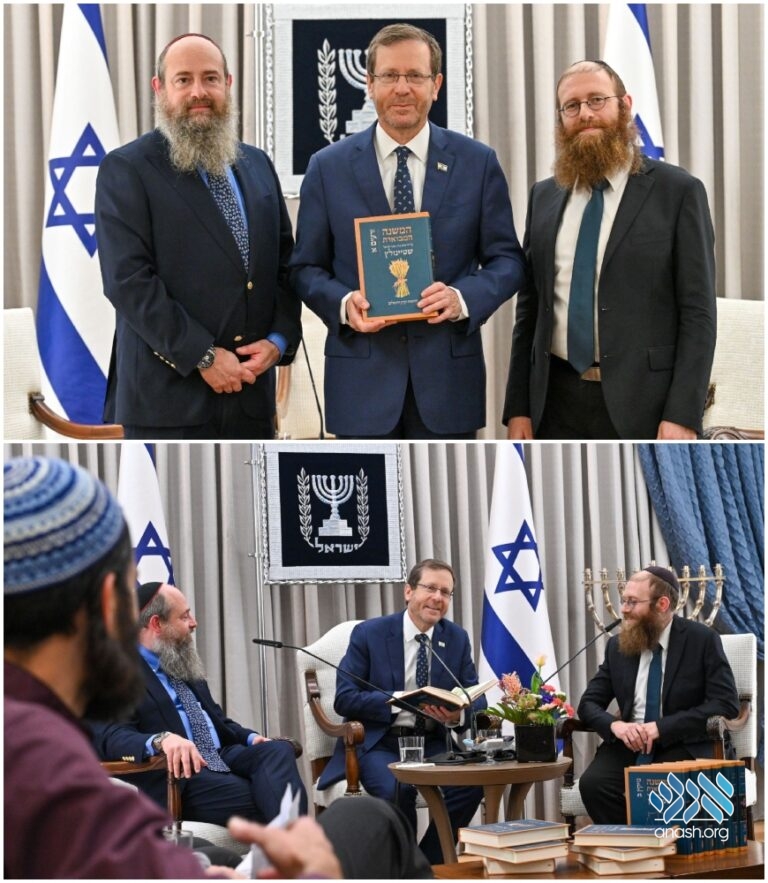 The presentation to President Herzog took place on Monday. He was gifted the final volume of the Mishnah with a modern Hebrew translation and commentary by the late Rabbi Adin Even-Israel (Steinsaltz), by his son, Rabbi Meni Even-Israel, director of the Steinsaltz Center.

This is the last project translated by Rabbi Adin Even-Israel (Steinsaltz), thus completing the work of translating the entire Jewish canon and making him the only commentator in Jewish history to have achieved this feat.

The late Rabbi Steinsaltz was an educator, researcher, commentator of the Talmud and Chassidus, philosopher, social critic, and author of over 300 works in various languages. He also established a network of educational institutions and received a variety of awards including the Israel Prize and the Israeli Presidential Medal of Honor.

Rabbi Steinsaltz’s teachings included a new edition of Judaism’s core texts, featuring a clear and concise interpretation and inviting students to delve deeper into various fields, concepts, halachic ruling, and historical background of the topics discussed. The Koren Steinsaltz Mishnah includes 13 volumes, 63 tractates, 4182 mishnayot over a total of some 9,000 pages. The modern Hebrew translation of the Mishnah alone took twelve years. Each volume of the Koren Steinsaltz Mishnah contains an average of 750 color photographs and illustrations.

President Isaac Herzog praised the series, saying “This is an amazing enterprise! The uniqueness of this series is that it serves the entire Jewish nation and connects them to their source. The fact that you have made it accessible to the whole People of Israel is a great privilege.”