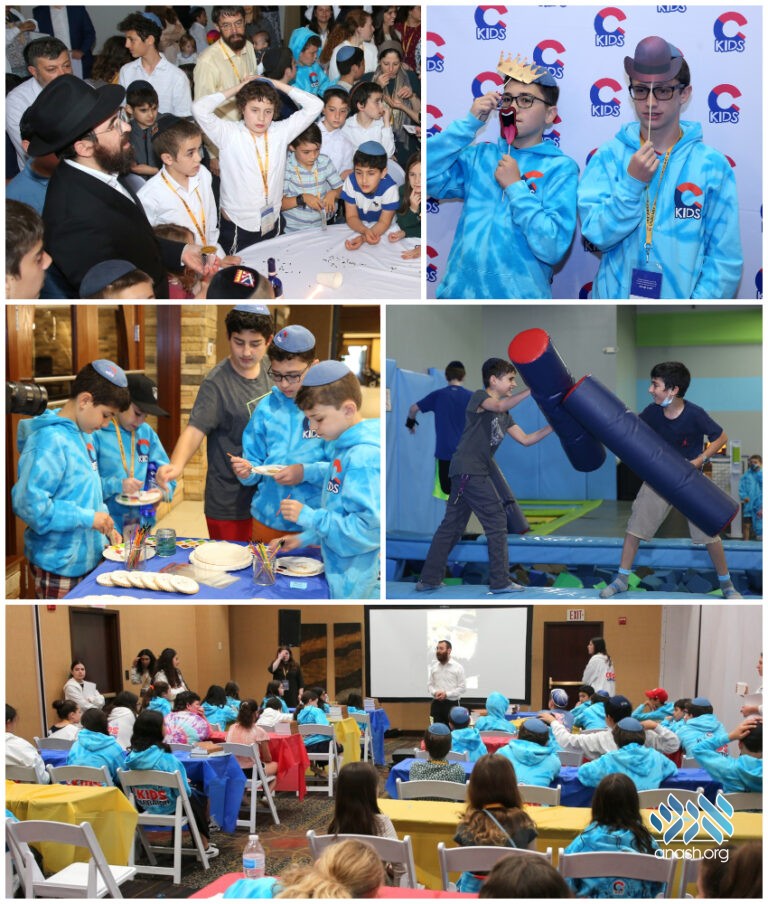 It is not often that a professional conference with an electrifying atmosphere can also provide the warmth and camaraderie of a family reunion – but that is exactly the sentiment many of the attendees of the recent CKids Shabbaton expressed at the conclusion of the event.

It is not often that a professional conference with an electrifying atmosphere can also provide the warmth and camaraderie of a family reunion – but that is exactly the sentiment many of the attendees of the recent CKids Shabbaton expressed at the conclusion of the event.

Taking place in the Bushkill Inn resort in Pennsylvania, the three-day extravaganza proved to be a memorable time for the children and families who traveled from all over the world to be at the long-awaited Shabbaton.

As soon as they arrived, attendees were greeted by the welcoming registration team and received their fun Ckids gear. Hands full with monogrammed sweaters, event passes, yarmulkes, water bottles and other Ckids gear, the children and their parents then made their way to the dining hall, where a buffet lunch awaited them.

This Shabbaton was the first opportunity for many of the Ckids to see their colleagues in person. The greetings, hugs and laughs brought a smile to the face of everyone present who were glad to experience some joy after a challenging year. Rabbi Zalmy Loewenthal, Director of Ckids International, graciously welcomed all the arrivals and spoke of his excitement at seeing all the JewQ champions from not only this year’s contest but last year’s as well, finally united together.

Following the gourmet meal was a dual program wherein the children enjoyed a day of water activities and a trampolining trip with their counselors. At the same time, the parents were treated to a slate of insightful talks from recognized speakers and scholars in residence Mrs. Sara Blau and Rabbi Shais Taub, and interesting topical segments from Rabbi Mendel Kotlarsky and Rabbi Menachem Friedman from Hatzalah.

As the start of Shabbos approached, a moving candle-lighting ceremony was held for all the women and girls, followed by an uplifting Kabbalas Shabbos and Shabbos dinner. Tired but contented bodies went to sleep that night in anticipation of another fun-packed program the next day.

Shabbos morning did not disappoint, a bright clear day welcoming the kids and parents alike to a schedule of davening, learning, eating and hikes led by the Ckids staff and visiting scholars. As if all the excitement during the day wasn’t enough, the end of Shabbos followed with an action-packed Motzai Shabbos program. The evening began with a musical Havdalah Ceremony which preceded a Bonfire and Glow Dance party set to the latest Jewish hits.

Finally, Sunday, the day of the JewQ Game Show Championships, arrived, and the grand show’s preparations went into motion. Participants and their families were given the opportunity to eat, Daven and write Panim in anticipation for the big day that represented the culmination of months of diligent learning and reviewing. The dedicated theatre room in the resort was the stage for the Game Show and the attendees entered in awe of the meticulous detail present in every aspect of the show.

The show itself was a resounding success with the children’s outstanding knowledge of the JewQ curriculum on display, a testament to the hours of hard work put in by parents, shluchim and of course, the children themselves. The winners took home their truly earned rewards, while all the participants and families returned home with joy and a renewed desire to strengthen their Jewish connection.