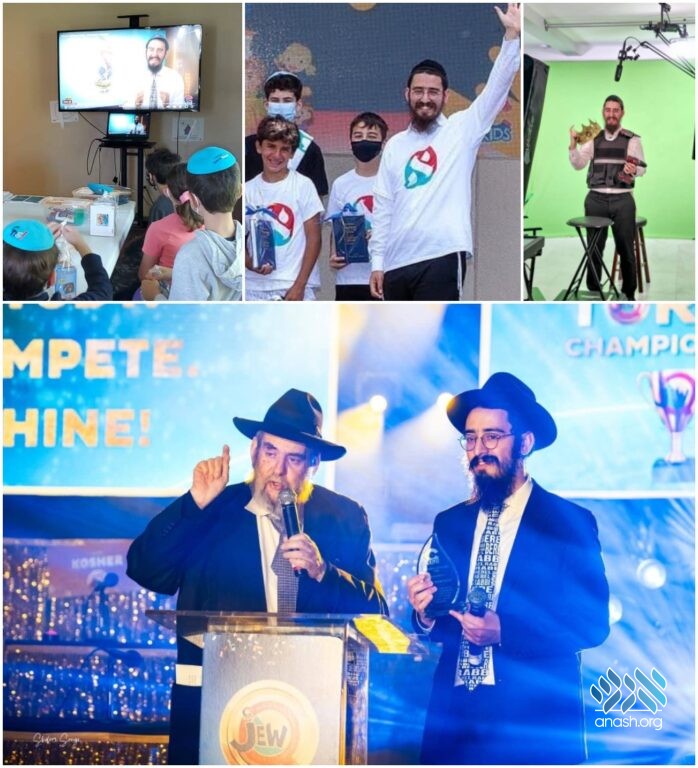 Rabbi Berel Paltiel of Port Washington, New York, was awarded for his commitment to transforming the landscape of Jewish education.

For over eight years, CKids has been working with shluchim to produce high-quality educational programming. And this year, at the JewQ International championship, CKids honored a shliach whose dedication to the next generation is unmatched. Rabbi Berel Paltiel of Chabad of Port Washington was honored as the CKids Educator of the Year.

The Educator of the Year award was established in 2019 to recognize the outstanding efforts of shluchim and shluchos who have made a major impact on Jewish education. For the past four years, Rabbi Paltiel has worked closely with the CKids team to use his talents to inspire and educate children in his community and beyond. Berel is often the featured face of virtual programs, engaging thousands of kids around the world through interactive videos.

His motto? “Education should be seriously fun!” Rabbi Berel Paltiel says. “High-level, meaningful, and as exciting as possible.”

Before moving to Port Washington 6 years ago, Rabbi Berel spent three years in Manchester, England, running Jewish workshops for kids in local public schools. He’s spent time in Iceland, Sweden, and Florida, running everything from Pesach seders to summer camps. “My experiences all over the world have given me a major appreciation for the importance of quality Jewish education,” he says. “The opportunity to collaborate with other talented Shluchim and Shluchos at CKids allows us to develop highly creative educational material for kids that they wouldn’t have otherwise.”

The award was presented to Rabbi Paltiel by Rabbi Moshe Kotlarsky, Vice Chairman of Merkos L’inyonei Chinuch, at the International JewQ Championship in Princeton, NJ. “The Rebbe emphasized time and time again the importance of using one’s talents to advance Jewish education,” says Rabbi Kotlarsky, “Rabbi Paltiel is a living example of this and an inspiration to us all.”