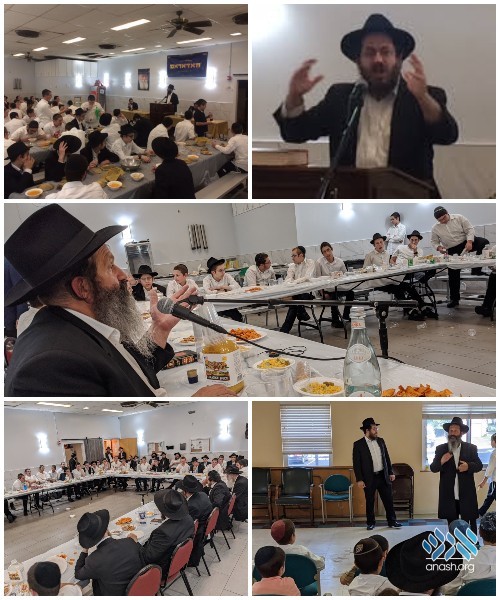 Yeshivas Lubavitch of Cincinnati farbrenged for Chai Elul together with Rabbi Sholom Mordechai Rubashkin, who also addressed the children of Tzivos Hashem and the local Nshei Chabad.

The days of Tes-Vav and Chai Elul were celebrated with great fanfare and excitement in Yeshivas Lubavitch Cincinnati.

On Thursday night (15 Elul), the Talmidei Hashluchim arranged ‘chadaram-dancing’ with a big Seuda in honor of the founding of Tomchei Temimim. That was followed by farbrengens for each individual shiur with their Mashpia. The excitement continued the following morning with a special ‘Seder Hashkem’ which included more dancing and farbrengen.

On Chai-Elul, the Yeshiva hosted Rabbi Sholom Mordechai Rubashkin. Rabbi Rubashkin first spoke to the “Yaldei Tzivos Hashem” and then to the local Nshei Chabad, followed by a Farbrengen in the Yeshiva. Many local anash and shluchim joined the Farbrengen at the Yeshiva.

After the Farbrengen, several talmidim accompanied Rabbi Rubashkin to the airport, where a special minyan was organized so that he could say Kaddish.

“The Talmidim were really inspired by the Farbrengen and took many hachlatos tovos,” the Rosh Yeshiva Rabbi Gershon Avtzon said. “The Yeshiva thanks Rabbi D. Sperlin for arranging the special trip.”