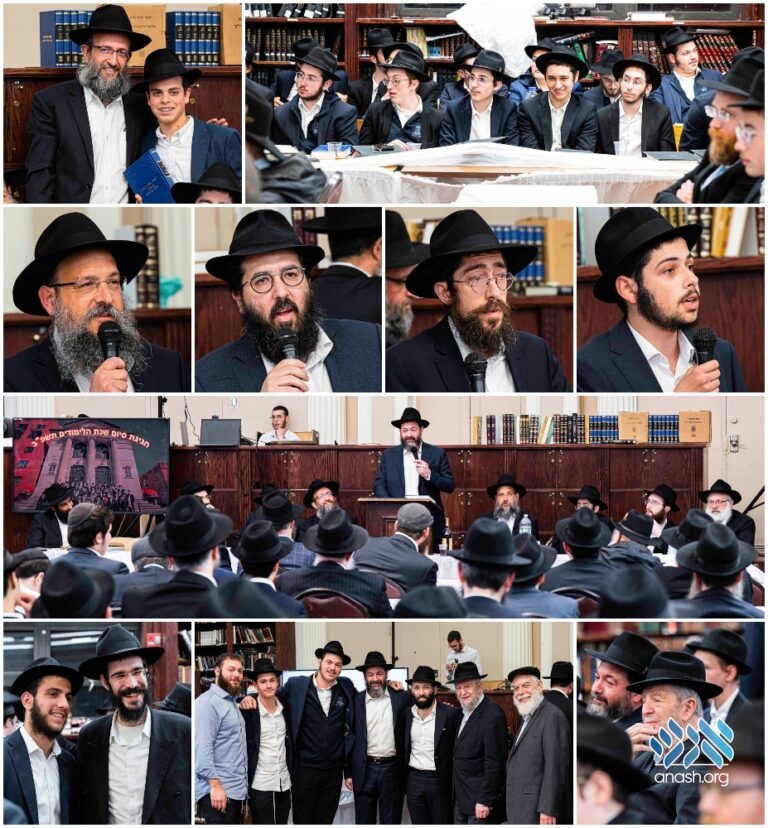 The growth and accomplishments of the bochurim of shiur gimmel of Chovevei Torah Mesivta were highlighted and celebrated at a graduation and siyum held this past week.

The growth and accomplishments of the bochurim of shiur gimmel of Chovevei Torah Mesivta were highlighted and celebrated at a graduation and siyum held this past Wednesday.

27 bochurim from the mesivta graduated at the event, held in the beis medrash of Chovivei Torah Zal, and attended by parents, grandparents, relatives and friends.

Throughout the evening, the various speakers spoke about how each bochur how grown tremendously over the past three years. Each speaker presented the accomplishments from their point of view: That of a maggid shiur, mashpia, menahel, student and parent.

The event began with a video of the Rebbe. Emceeing the evening was bochur Yechezkel Freundlich, who welcomed the graduates and guests and introduced each speaker.

A siyum on Maseches Brachos was made by bochur Yankel Gurkov, showcasing the successful studies of the bochurim over the year.

Menahel Rabbi Menachem Minsky addressed the bochurim, telling them that just as in the parsha we learn that Hashem told Moshe “shelach lecha” – send for yourselves, similarly the time after yeshiva is a time when one works for his own sake. He encouraged them to continue to believe in themselves and make great strides in learning and personal growth.

Rabbi Yanky Klyne, a maggid shiur who taught the bochurim over the past two years, praised their accomplishments and hasmada, and highlighted different points of hadracha the yeshiva had instilled in the boys.

Graduate Shmuli Raskin spoke next, encouraging his classmates to take the lessons they learned from yeshiva and apply it to their lives. He then thanked the parents for all they do for their sons, and thanked the Rebbe for continuing to inspire uss.

R’ Yossi Malamud, a parent of one of the graduates, then spoke. He recalled the weekly father-and-son study sessions in yeshiva, which he immensly enjoyed. He said that on the weeks he couldn’t attend, his father R’ Shmuel Malamud would come in his place, and he would enjoy it each and every time. He enncouraged the parents to utilize the program, and to study with their sons when they had the oppurtunity.

He also encouraged the bochurim to use out their remaining time in yeshiva, saying that it was precious time that should be used to its fullest.

Certificates and awards for bochurim that had excelled in various categories were also distributed at the graduation, with a number of bochurim receiving beautiful sets of seforim in recognition of their achievments.