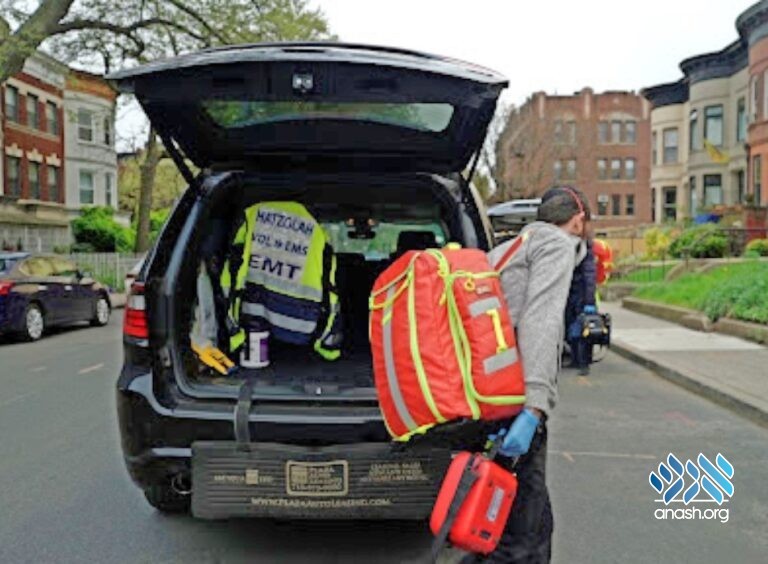 Chaya Chesney of Crown Heights was going about her usual business preparing for Shabbos when she heard a terrible sound from her baby that would make any parent shudder. A piece of frozen mango had gotten stuck in the baby’s throat, and she soon went into cardiac arrest.

For over fifty years, Crown Heights Hatzalah has been a literal lifesaver for our community. Every day, dedicated volunteers drop everything to answer a call, ranging from relatively minor emergencies to literally saving lives. These everyday heroes go largely unnoticed, going about their day as usual and without fanfare. But their quick responses and lightning thinking will never be forgotten by those who were helped or whose lives were saved. There are thousands of such stories, many of them never told.

Below is one such story.

Hatzalah is known for many things. They’re there when you need them, they are professional, they’re quick, and without a doubt, they save lives. Perhaps their hallmark feature, Hatzalah’s response time, is legendary, nothing short of miraculously quick. This G-d-sent quality saved the life of one small baby girl one fine Friday afternoon in Cheshvan of 5778.

*Chaya Chesney of Crown Heights was going about her usual business preparing for Shabbos when she heard a terrible sound from her baby that would make any parent shudder. A piece of frozen mango had gotten stuck in the baby’s throat, and she was having trouble breathing. Turning all sorts of colors, the small child was rapidly losing the battle for her own life.

“My husband Bentzy and I were terrified and shaking, and of course, we immediately called Hatzalah,” recalls Chesney.

Frantically calling a neighbor with some medical knowledge, the parents waited outside with nail-biting anxiety for Hatzalah to come. The neighbor was doing her best, but the baby had already passed out and stopped breathing. Much to their horror, try as they could, they were unable to dislodge that stubborn piece of mango.

“Our precious baby was quickly reaching the end of her rope by that point, and she had already gone into cardiac arrest. It was quite traumatic, to say the least.”

And then the angels arrived. The first Hatzalah member arrived in just one-and-a-half minutes, with a whole team right behind him. Bursting on to the scene, the first Hatzlalah member immediately assessed the situation. As a seasoned Hatzalah member with extensive experience, he was able to clear the airway, allowing precious oxygen to flow into the baby’s lungs.

With a more positive prognosis, the baby has whisked away to the hospital with lifesaving measures administered throughout the transport. Baruch Hashem, by the time she got there, Hatzalah successfully got her pulse back, and at about a half-hour from when the whole saga started, she was fully awake and breathing normally. By the next day, the baby was fully back to herself.

The doctors and nurses in the hospital were amazed by the story. One after another, they told the parents, “We’ve seen many children in such situations, unfortunately, and your daughter is a complete anomaly. Most kids simply aren’t so lucky.”

Crown Heights Hatzalah has always been the picture of professionalism and is always looking to improve upon that. With a new headquarters breaking ground in a few weeks, the expanded resources it will provide will IYH only bring even more impeccable service to the growing Crown Heights community.

The entire community is invited to the groundbreaking of  Crown Heights Hatzalah’s new headquarters at 533 Albany Avenue IYH on Sunday, 24 Adar Beis / March 27 at 1:00 pm.

*Full permission was granted to use real names.