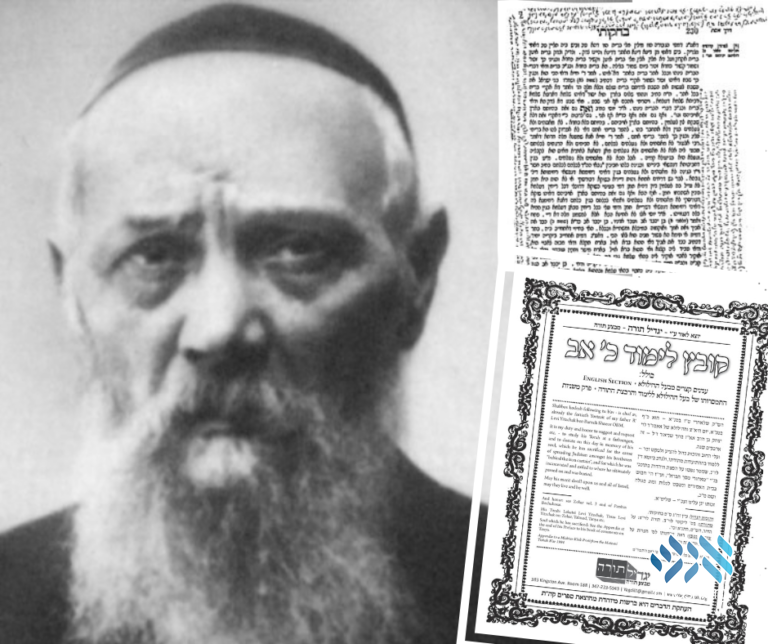 Watch a sicha where the Rebbe talks about the great mesirus nefesh of his father, and lessons we can learn from him about educating our children in the way of Torah.

Rabbi Levi Yitzchak Schneerson was born in 1878, on the 18th of Nissan, in the town of Podrovnah (near Gomel), to Rabbi Baruch Schneur and RebbetzinZelda Rachel Schneerson. Rabbi Levi Yitzchak was the oldest of four children: two brothers, Rabbi Shmuel and Rabbi Shalom Shlomo, and one sister, Rebbetzin Rada Sima. His father, Rabbi Baruch Schneur, was a great-grandson of the third Lubavitcher Rebbe, Rabbi Menachem Mendel Schneerson, known as the Tzemach Tzedek.

As a small child, Rabbi Levi Yitzchak showed signs of being a prodigy, as the Rebbe Rayatz, the sixth Lubavitcher Rebbe, would later write, “Already from a young age, his extraordinary talents were discovered.” He mastered Kabbalah, Talmud, and Chassidic philosophy and was ordained by the leading Torah authorities of his time, Rabbi Chaim Soloveitchik of Briskand Rabbi Eliyahu Chaim Meizel of Lodz.

In 1900, at the age of 22, Rabbi Levi Yitzchak, who had already become renowned as a Kabbalistic and halachic scholar, married Rebbetzin Chana Yanovsky. The daughter of Rabbi Meir Shlomo Yanovsky, the Rabbi of Nikolayev and chassid of the Rebbe Maharash, the fourth Lubavitcher Rebbe, young Rebbetzin Chana was known as a scholar in her own right. Rabbi Shalom DovBer Schneerson, the fifth Lubavitcher Rebbe, had suggested the match. The wedding took place on the 11th of Sivan, in Nikolayev, where Rabbi Levi Yitzchak and Rebbetzin Chana would remain for almost a decade.

The eldest, Menachem Mendel, was born on the 11th of Nissan 1902 and would grow up to become the seventh Lubavitcher Rebbe, known as the Rebbe.

In 1909, at age 31, Rabbi Levi Yitzchak was called upon to serve as rabbi of the Ukrainian city of Yekatrinoslav (known today as Dnepropetrovsk). The fifth Rebbe, Rabbi Sholom Dovber Schneerson, was instrumental in securing the position, and he sent letters to various community leaders, including Sergei Pavlov Fallei, one of the city’s most respected members of the Zionist movement. Rabbi Levi Yitzchak also met with Menachem Ussishkin, a community activist who had served as secretary of the First Zionist Congress. Following his appointment as Rabbi, Rabbi Levi Yitzchak eventually assumed the position of chief rabbi and served the community for 32 years, until 1939.

Besides for a small Chassidic constituency, the Jewish community of Yekatrinoslav included many non-religious professionals, who also held Rabbi Levi Yitzchak in great esteem. His wife, Rebbetzin Chana, who was fluent in several languages, contributed to her husband’s success and influence as a communal leader.

During his years of leadership, Rabbi Levi Yitzchak resolutely engaged in religious activism, never giving in to the ever-growing pressure from Soviets. He oversaw the building of a new mikveh and clandestinely officiated at weddings and circumcisions. One area of particular note was his involvement in the production of kosher-for-Passover matzahs. As all factories in Russia were owned by the government, it was their policy that set the standard for the matzah production.

Yet, even the Soviets knew that for the Jews to purchase their matzahs, they would require a rabbinic authority to provide halachic certification. When they turned to Rabbi Levi Yitzchak, who was renowned as the chief rabbi of a prominent city, he demanded that he be allowed to install his own rabbinic supervisors, otherwise he could not offer certification. When they refused, Rabbi Levi Yitzchak remained steadfast. He traveled to Moscow and met with Mikhail Kalinin to explain his position. Rabbi Levi Yitzchak’s efforts bore fruit and the Soviets relented. The Passover matzahs would be produced under the proper rabbinic standards.

Stationing guards at each of the doors, they began to search the house. Rifling through the thousands of folios of Rabbi Levi Yitzchak’s written works on Kabbalah, halachah, and rabbinic correspondence, they confiscated his rabbinic ordination certificates and a petition from the community of Jaffa that he emigrate and serve as chief rabbi, along with visas for the entire family.

Finally, at six o’clock in the morning, after they had ended their search, Rabbi Levi Yitzchak was arrested for his activities on behalf of Judaism in the Soviet Union. After more than a year of torture and interrogations in Stalin’s notorious prisons, Rabbi Levi Yitzchak was tried in Moscow and sentenced to five years of exile in Central Asia. Rebbetzin Chana subsequently followed him to be with him at his remote location of exile.

Rabbi Levi Yitzchak and Rebbetzin Chana’s first home in Chi’ili was a single room in the dwelling of a crude Tartar couple who had a young child. The room had no door and was damp, muddy, and filled with swarms of mosquitoes. They lived in extreme poverty and discomfort, with no privacy. Though they never discussed it, pangs of hunger tormented them. Once, they did not taste a piece of bread for an entire month.

With World War II ravaging Europe, many refugees and displaced people ended up in the Kazakhstan region where Rabbi Levi Yitzchak had been exiled. Rabbi Levi Yitzchak soon became well-known among the Jewish refugees. Large groups of men and women, especially those women whose husbands were taken away for the war effort, would visit the esteemed Rabbi and his wife, seeking counsel on various matters.

With meager resources at their disposal, and facing a constant threat to their very lives, Rabbi Levi Yitzchak and Rebbetzin Chana heroically reached out to their brethren in need, helping in every which way—materially and spiritually.

In 1944, as Rabbi Levi Yitzchak’s sentence was nearing its end, his physical condition began to deteriorate. Though he was unaware of this, a serious illness was spreading through his body, severely weakening him. Meanwhile, friends in nearby Alma Ata resolved to secure the Rabbi’s release. They contributed thousands of rubles, giving of most of their wealth, in order to acquire the proper permits for the relocation. After six weeks fraught with setbacks and obstacles, they were finally able to obtain the release documents.

Immediately after Passover, Rabbi Levi Yitzchak and Rebbetzin Chana left Chi’ili and arrived in Alma Ata. In this large city, their living conditions improved somewhat, and they worked more vigorously to help others in need. Yet, through the summer, the Rabbi’s illness grew worse. A young friend made a special trip from Leningrad to Alma Ata, together with a well-known doctor. The doctor did not have a good prognosis for the Rabbi. He had no cure for his ailment.

Rabbi Levi Yitzchak and Rebbetzin Chana endured those heartbreaking days with exceptional strength and fortitude. Despite the dire conditions, they continued to welcome any depressed or broken person into their home, attending to his or her specific needs and providing food when necessary.

On the 20th of Av, Rabbi Levi Yitzchak’s condition turned critical. Although he was no longer able to speak, he still continued to murmur words of Torah or Psalms. That evening, Rebbetzin Chana took a short rest so that she would have the strength to continue caring for him; when she awoke, she found the house filled with people. Her husband had returned his pure soul to its Maker.

During his years as Rabbi of Yekatrinoslav, as well as while in exile in Chi’ili, Rabbi Levi Yitzchak wrote thousands of manuscripts of Torah analysis and novella, encompassing and intertwining, in his unique style, Talmud, halachah, Kabbalah, and Chassidism.

Unfortunately, most of these manuscripts were misplaced or destroyed by the Communists and the Nazis respectively. But when she escaped Russia in 1947, Rebbetzin Chana managed to smuggle out the manuscripts that Rabbi Levi Yitzchak had written during his years of exile.

At the behest of Rabbi Levi Yitzchak’s son, the Rebbe, these manuscripts were published in a five-volume set under the title Likutei Levi Yitzchak. In his father’s memory, the Rebbe would also explain a passage of these Kabbalistic teachings at many of his Shabbat farbrengens.

To this day, Likutei Levi Yitzchak remains one of the most unique works on Kabbalistic thought from the last century.