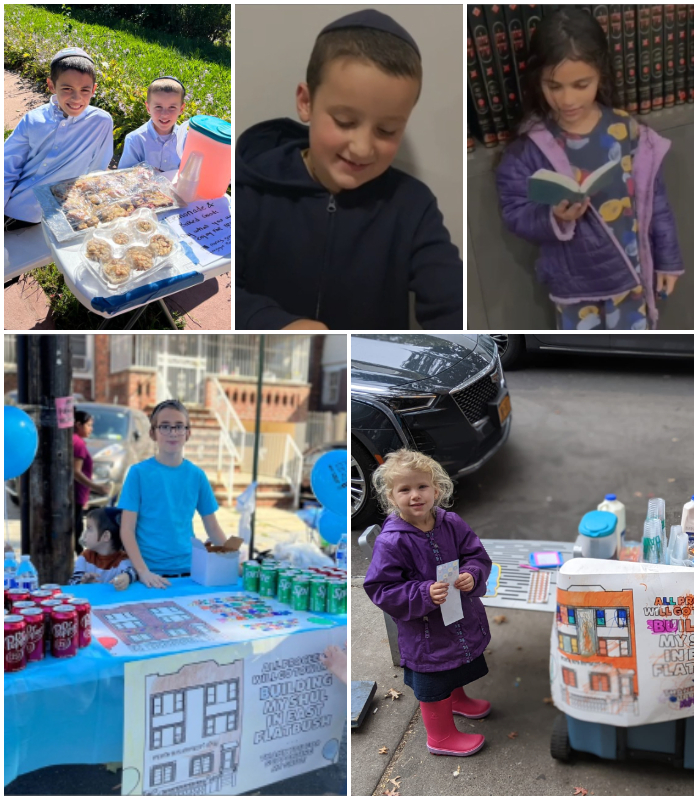 As the kehillah of East Flatbush prepares to launch a mega fundraising campaign, the children are finding wholesome ways to show support for the cause and bring in funds of their own.

Exciting changes are happening in the East Flatbush community, and even the children are feeling it! When the kehillah went under contract last month for a new shul building, the adults got to work strategizing and fundraising.

The children did not want to be left out, and local mothers came up with ways to bring them on board. Before Sukkos, each family in the neighborhood received a poster about the new shul campaign, which they were encouraged to color in and use in their own creative ways.

“Some kids made lemonade stands, others sold cookies and popcorn in Crown Heights,” said Mrs. Shayna Rochel Bialestock. “My daughter set up a stand offering light-up sticks at Simchas Bais Hashoeva. It wasn’t about the money, really – the idea was to spread awareness about our community and the new shul.”

The initiative provided a great way for all of the kids to feel included and involved, something the East Flatbush community excels at.

Shortly before Shabbos Bereishis, Mrs. Chaya Shochat came up with a plan that would get the kids involved while promoting the community’s dearest values. She organized a tehillim-a-thon, and dozens of children spent the day Friday calling relatives and friends asking them to sponsor each kapital said over Shabbos mevorchim. More importantly, they spent hours on Shabbos poring over their tehillims, with many children opting to say more than usual in honor of this initiative.

“It was exciting being able to raise money and do our own booths,” said 9-year-old Chana Raizel Bialestock, who brought awareness to the campaign by setting up a stand offering fun goodies at Crown Heights’s nightly chol hamoed celebrations. “And I was able to get more than $500 from saying tehillim. There is so much going on to raise money for the shul, and we get to be part of it!”

Chana Raizel continued, “We moved here less than a year ago and I love it! When we moved, people were offering to make food for us so we could unpack, and I made friends right away. People were very welcoming to us. I love attending all the programs for kids, especially the weekly Shabbos parties!”