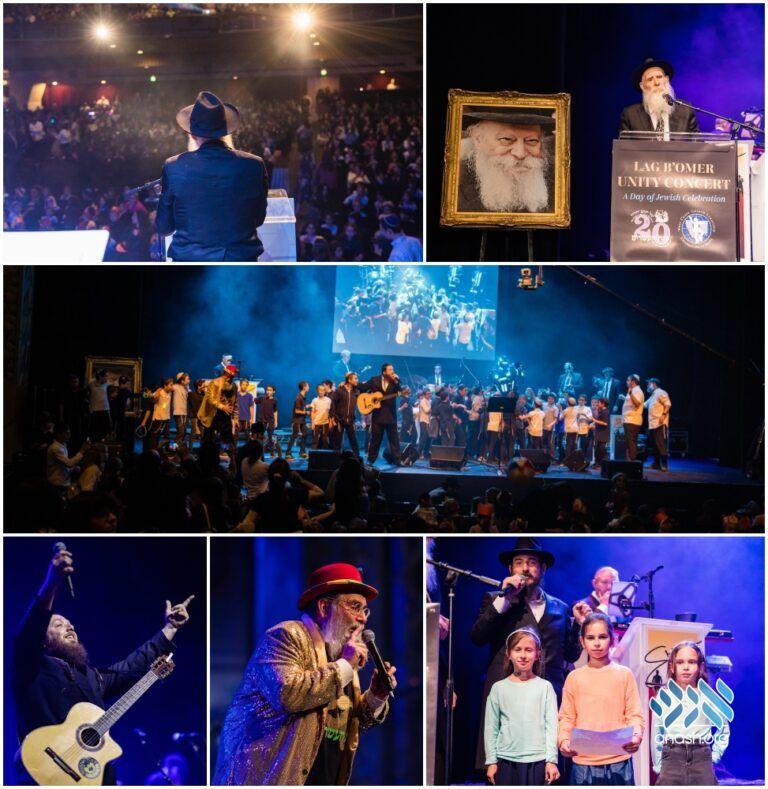 The Saban Theatre in Beverly Hills was overflowing with joy and excitement as a capacity crowd of 2,000 children joined together for a day of unity and music to celebrate Lag B’Omer.

The Saban Theatre in Beverly Hills was overflowing with joy and excitement as a capacity crowd of 2,000 children joined together for a day of unity and music to celebrate Lag B’Omer.

Rabbi Boruch Shlomo Cunin, Head Shliach and Director of West Coast Chabad-Lubavitch, opened the event by emphasizing the Rebbe’s special connection to Lag B’Omer and the unique power of Jewish children to bring the immediate Geulah. Rabbi Cunin congratulated “The Rebbe’s Diamond Daveners” on their 20th anniversary, and then presented a special video compilation of the Rebbe on Lag B’Omer, basking in the joy and unity of Jewish children.

Tehillim was recited by sisters Chana (age 7), Sarah (age 7), and Miriam (age 9) Deutsch, the Rebbe’s young Shluchos in Bucharest, Romania, where they and their community are hosting thousands of Jewish refugees and children from neighboring war-torn Ukraine.

Emcee Rabbi Meyer Greene of Chabad of Tarzana excited the crowd with a larger-than-life LED robot to begin the festivities, followed by the opening act, singer and songwriter Yossi Rodal who energized the crowd with his hit song “Proud Jew”.

The main attraction was popular Jewish music superstar Joey Newcomb who elevated the day with his exciting and electrifying performance, drawing the crowd into song and dance. Joey’s performance was topped by his signature “Thank You Hashem” song, which caused the children to jump from their seats with joy and unity.

The spirit of Jewish unity was palpable as Rabbi Mendel Duchman, Director of Kol Yaakov Yehuda Junior Congregation, called up children from different schools and groups throughout Southern California to recite the 12 Pesukim.

A moving tribute during the 12 Pesukim occurred when Chaya Mushka (age 9) and Chana Bluma (age 8) — daughters of Rabbi Tzemach Yehoshua Cunin, of blessed memory — were called to the stage by Rabbi Duchman to recite a Posuk in memory of their dear father, who produced and organized the annual Lag B’Omer unity event for many years, up until the Lag B’Omer event at the very same location, exactly three years ago, which occurred just weeks before his sudden passing at the age of 43.

The annual West Coast Chabad-Lubavitch event was dedicated in loving memory of Rabbi Tzemach Yehoshua Cunin, Emissary of the Rebbe and director of Chabad of Century City, and co-sponsored by Chabad Youth Programs and Kol Yaakov Yehuda, in honor of “Celebration 20” of Kol Yaakov Yehuda — The Rebbe’s Diamond Daveners.