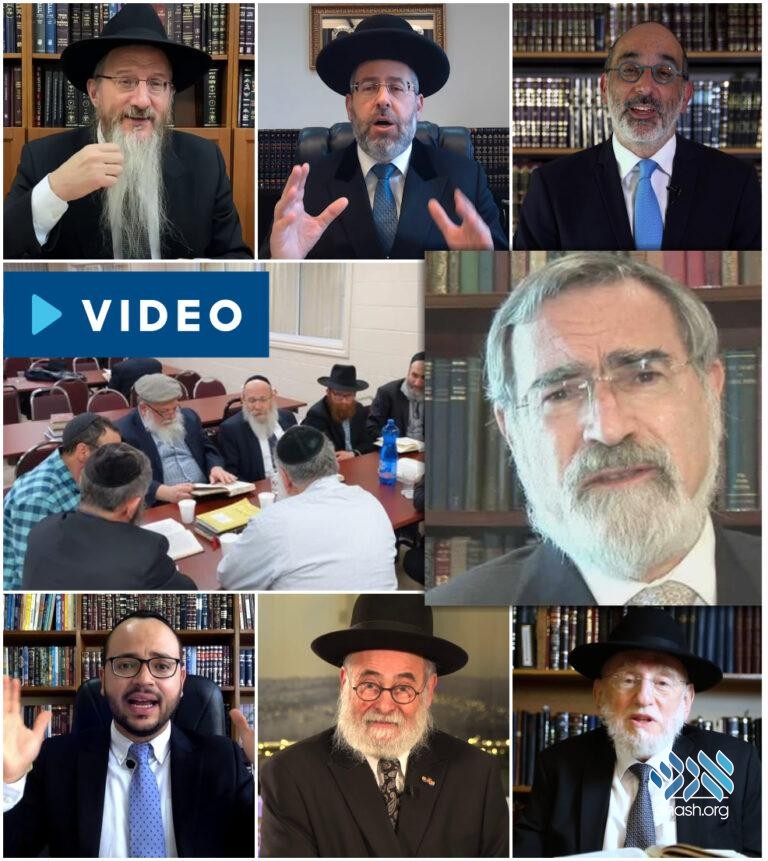 Six Chief Rabbis from around the world are paying tribute to Lord Rabbi Jonathan Sacks by teaching his adaption of the Rebbe’s sicha on Parshas Vayechi.

The world suffered a devastating blow this past November when Lord Rabbi Jonathan Sacks, former chief rabbi of the United Kingdom and a brilliant scholar and teacher, tragically passed away at the age of 72. In the time since his untimely death there has been an outpouring from Jews and non-Jews from all walks of life, men and women, remembering and celebrating an individual who not only guided British Jewry, but whose written and spoken words have inspired millions.

Now, six of Sacks’s peers—chief rabbis in countries around the world—are paying tribute to his life of leadership. Sacks’ first work was Torah Studies, eloquent adaptations of parshah essays by the Rebbe and published by Kehot Publication Society in 1986. For the Torah-portion of Vayechi, the week of Dec. 27-Jan. 2, the six rabbis have recorded classes using Sacks’ beautiful rendition as their source text.

The memorial lesson is organized by Project Likkutei Sichos, a learning initiative that will ultimately see its thousands of participants complete the 39-volumes of the Rebbe’s edited talks in its entirety. With dozens of talks on each Torah portion, it will take eight years for the weekly learning schedule to come to its conclusion.

It Started at a Campus Torah Class

Sacks’s Torah Studies book came about after a series of life-altering encounters with the Rebbe. The first meeting came in the summer of 1968, not too long after Sacks had formed a close relationship with Chabad Rabbi Shmuel Lew, who led Jewish student outreach efforts on English university campuses including Cambridge University, where Sacks was a Jewish student group leader, and London Chabad Rabbi Faivish Vogel.

“Rabbi Sacks’s first visit with the Rebbe had a profound effect on him,” Rabbi Shmuel Lew, today a senior Chabad emissary in London and the director of the Lubavitch Senior Girls School, tells Chabad.org. That summer of `68 the Rebbe suggested Sacks remain in New York for a bit longer, until after Rosh Hashanah. “Much to Sacks’ amazement, the Rebbe knew that the term in Cambridge began weeks later than most of the other college terms did,” says Lew.

With Cambridge’s early October start date that year falling out after Rosh Hashanah, Sacks indeed stayed. “The experience moved him so profoundly that on Rosh Hashanah in 2019, he expressed that for the past 50 years, the sounding of the shofar to him has meant the inspiration, depth and joy he experienced at the Rebbe’s shofar sounding that year,” Lew recalls.

During that initial meeting the Rebbe pressed Sacks on what he was doing for Jewish life on campus, and so when Sacks returned to Cambridge he began hosting a Torah class in his dormitory room. That class continued— albeit hosted in different venues—through Chabad on Campus’ arrival at Cambridge in 2003, to this very day.

“Very often before the class began I would share with Sacks a sichah — talk — that the Rebbe had recently taught,” says Lew. “He was fascinated, and his interest only grew.”

In response to the Rebbe’s 1971 call to increase in Torah study, Vogel suggested that Sacks—with whom by then he enjoyed a long and deep relationship—begin rendering the Rebbe’s most intricate weekly teachings on the writings of Rashi into English. “Studying the Rebbe’s talks weekly together with him was one of the highlights of my life,” says Vogel.

“That was his very first publication and was followed by some thirty books which have received universal acclaim and adulation amongst religious leaders, political leaders, academics and the populace of wide and varying nations,” says Vogel. But, “the underpinning of all his moral philosophy lies within his very first book.”

In the beginning of 2020, as the 70th anniversary of the start of the Rebbe’s leadership on 10 Shevat 1950 approached, a group of rabbis and activists created Project Likkutei Sichos. The ambitious project aims to complete a study cycle of all of the Rebbe’s edited talks as published in the 39-volume compendium titled Likkutei Sichos.

As Sacks writes in the introduction to Torah Studies, a sichah of the Rebbe “leads us into fresh perspectives, provisional answers and new questions, until we climb rung by rung to the most elevated of vantage points.

“Each talk moves from the specific to the general, the finite to the infinite, and back again. Each invites us to undergo a profound transformation in our way of seeing the world and ourselves, so that when we return at the end of a sicha to the question with which we began, everything has changed.”

It’s a journey best undertaken with the help of a skilled guide.

Enter Project Likkutei Sichos. With its plethora of resources for each week’s talk, the project allows the scholar to delve deeper into the nuances of the Rebbe’s words while a beginner can enjoy a ten-minute summary of the teaching, with dozens of options of classes and lectures each week in multiple languages. Summaries, translations and source sheets are provided, as well as resources to help participants find a study partner or class suitable for them.

More than 10,000 people participate in Project Likkutei Sichos each week, and the project continues to grow in size and scope week over week with more participants joining and instructors and resources added.

“The sichos adapted by Rabbi Sacks in Torah Studies convey the Rebbe’s thoughts with a unique clarity and succinctness,” says Rabbi Yossi Friedman, who directs the Kehot Publication Society, which published Torah Studies and made it available online at Chabad.org. “In his foreword to the latest edition, Rabbi Sacks wrote: ‘Great spiritual teachings do not die. It is my hope that this brief selection taken from the Rebbe’s words will serve as a living reminder that the Torah continues to be our Tree of Life.’ These are appropriate words for the translator—Lord Rabbi Sacks himself—as well.”

Vogel relates how following the Rebbe’s passing in 1994, Sacks delivered an hour-long memorial lecture. At the conclusion of his talk that in many ways captured and distilled the quintessence of the Rebbe, Sacks said, “I have tried to pay tribute this evening, not only to one of the great leaders of Jewish history, but also one of the great ideas of the Jewish spirit. I can think of no more visible proof of an invisible force—the force of the mystical Ahavat Yisroel—the love for every Jew—which the Lubavitcher Rebbe so loved and lived and taught.”

“Indeed, he mirrored the Rebbe in his aspirations,” says Vogel. “This must be his ultimate accolade.”