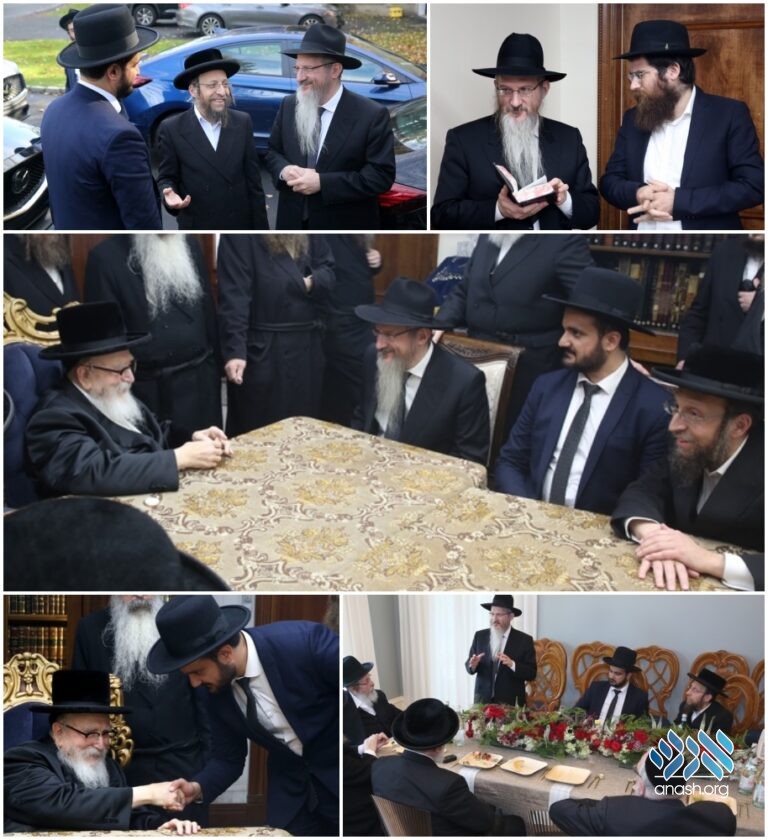 The Skverer Rebbe welcomed Russian Chief Rabbi Berel Lazar and Iranian Chief Rabbi Yehuda Gerami into his home on Sunday, where they discussed the joint efforts of the two Chief Rabbis to assist and educate Iranian Jewry.

The village of New Square, New York, was host to an unusual sight on Sunday, when the Chief Rabbis of Russia and Iran arrived for a meeting with the Skverer Rebbe.

The Skverer Rebbe received the delegation, comprised of the Chief Rabbi of Russia, Rabbi Berel Lazar, the Chief Rabbi of Iran and member of the Union of Rabbis in Islamic Countries Rabbi Yehuda Gerami, and renowned mechanech Rabbi Zalman Leib Markowitz, with great honor, welcoming them into his private chambers.

With all four of his sons seated beside him, the Skverer Rebbe took great interest in the going-ons in the Iranian Jewish community. He asked about their existing educational institutions as well as about those that are in the planning stages. The Skverer Rebbe expressed his delight about hearing about the ongoing connection the community has had for many years with Russia’s Chief Rabbi, as well as about the groups of young Rabbis from Iran who fly to Moscow periodically in order to study shechita and learn about Jewish leadership.

The visit to the Skverer Rebbe was preceded by an earlier meeting held in Monsey with a number of local activists, who gathered to hear the fascinating first-hand accounts of Jewish life in Iran. With the window into the community only having opened up recently, many of the participants were hearing concrete details about the Iranian Jewish community for the first time in their lives.

The participants heard from Rabbi Grammi and Rabbi Markowitz about the current state of the Iranian Jewish community, and expressed their great admiration for the Chief Rabbi’s work.

The trip was arranged by Merkos Suite 302, under the auspices of Rabbi Moshe Kotlarsky, who is in constant touch with Rabbi Gerami.