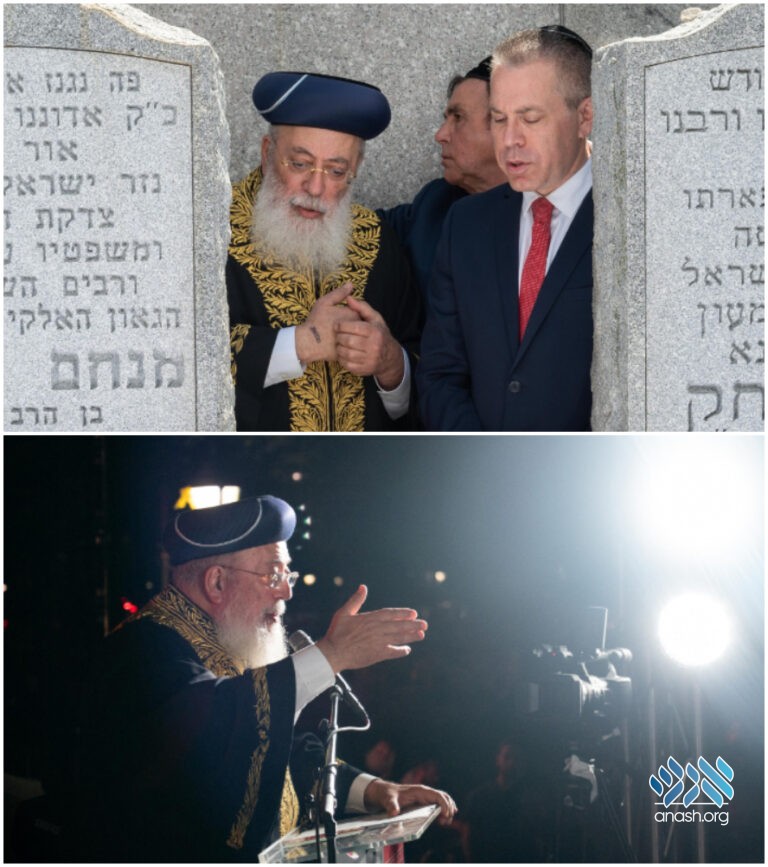 Chief Rabbi Shlomo Amar visited the Ohel on Gimmel Tamuz morning with Israeli Ambassador Gilad Erdan. Later that evening, he attended the annual Siyum HaRambam in front of 770, calling on all to emulate the teachings of the Rambam and the Rebbe.

The Jerusalem Chief Rabbi Shlomo Amar and Israeli Ambassador Gilad Erdan visited the Ohel of the Rebbe on Gimmel Tamuz, along with Mrs. Erdan and leaders of the Syrian Jewish community headed by Mr. Harry Adjmi.

They met at the Ohel, where Chief Rabbi Amar blessed Ambassador Erdan with much strength and success as he represents the Jewish state at the United Nations, and the United States. They were accompanied by Rabbi Yosef Carlebach, and Rabbi Mendy Carlebach who coordinated the meeting. The group joined more than twenty-five thousand people that came to commemorate Gimmel Tammuz.

Later that evening, Rabbi Shlomo Amar was the keynote guest speaker at the 40th Annual Siyum HaRambam Celebration. This annual event, celebrating the completion of study of the magnum opus of Maimonides (the Rambam), was attended by ten thousand men, women, and children, and was held on Eastern Parkway, in front of 770 Eastern Parkway, the Rebbe’s Shul.  It was also televised internationally to congregants in Israel, Europe, South America, the former Soviet Union, and Asia.

The event heard remarks from Chief Rabbi Berel Lazar of Russia, Rabbi Avrohom Osdoba, Rabbi Yosef Braun, of the Crown Heights Beis Din, and Rabbi Yosef Hecht, Rabbi of Eilat, Israel. In his keynote address, Chief Rabbi Amar inspired and electrified the crowd, calling on all to emulate the teachings of the Rambam and of the Lubavitcher Rebbe. The Chief Rabbi received a standing ovation as he concluded his speech with a heartfelt prayer for the immediate revelation of Moshiach, and the return of all our nation to the Holy Land.