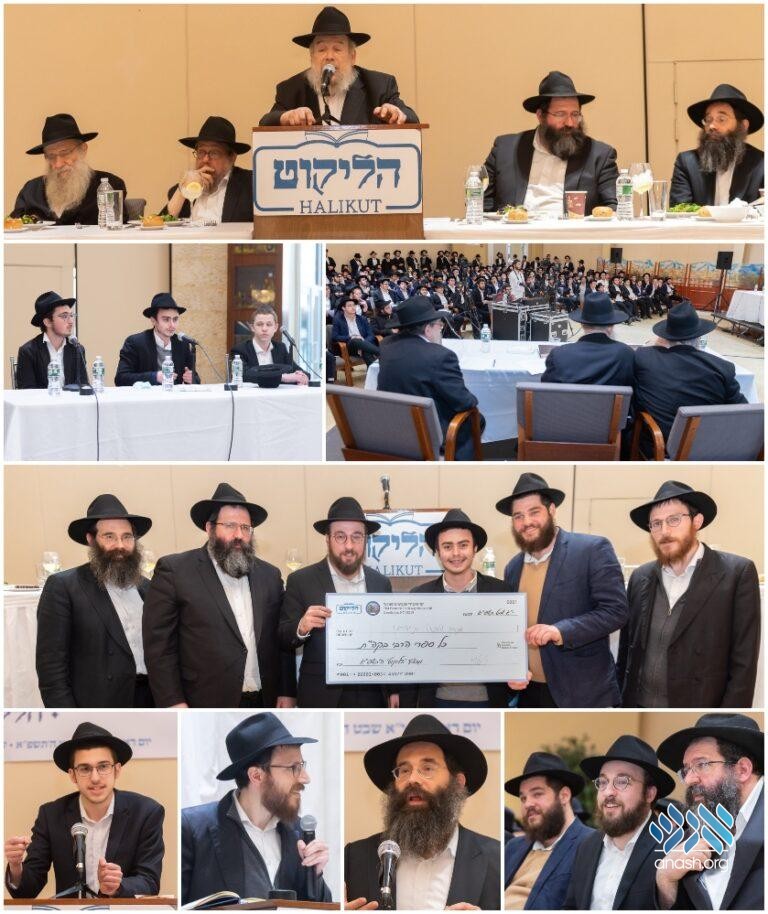 A full day of tests and programs culminated with a grand chidon where the three finalists competed for the grand prize, and a grand Siyum celebrating the achievements of all 300 bochurim who completed Likkutei Sichos Chelek Lamed.

A full day of tests and programs ended with a Chidon for those with the highest marks and a grand Siyum celebrating the achievements of all 300 bochurim who completed Likkutei Sichos Chelek Lamed.

While the tests were being marked, Bochurim had the opportunity to engage in a first-of-its-kind crossfire session where they can pose questions anonymously to a panel of mashpi’im. Panelists were Rabbi Yossi Klyne of Baltimore, Rabbi Meir Chaim Posner of New Haven, and Rabbi Leima Wilhelm of Morristown, and moderated by Rabbi Hertzel Pevzner.

The final competition was moderated by Rabbi Shmuli Avtzon, where contestants demonstrated their fluency in an entire Sefer of Likkutei Sichos. Rabbi Nachman Shapiro, Rabbi Sholom Charitonov, and Rabbi Avrohom Gerlitzky, questioned the contenders, while the crowd of hundreds watched spellbound.

The action-packed day concluded with a grand Banquet addressed by Rabbi Avrohom Gerlitzky of Oholei Torah, and a keynote address by Rabbi Mendy Shapiro, mashpia in Ohr Elchonon Chabad.

Halikut is a program of Vaad Hatmimim under the direction of Rabbi Tzvi Hirsh Altein, and led by Tzvi Alperowitz, Boruch Ceitlin and Peretz Garelik. A special thanks to the Talmidim HaShluchim of each yeshiva who made it all possible.

To support Halikut, and Vaad Hatimimim’s other programs, please go to TheBochurim.com – Please give, and give generously!