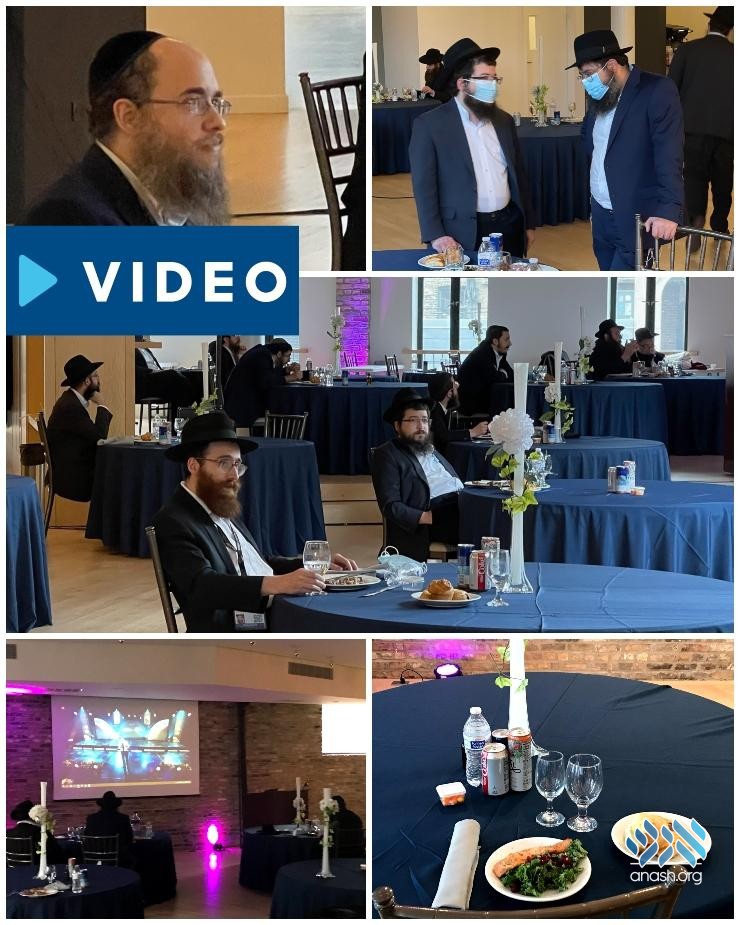 Just one day before the mayor sent the entire city into a lockdown, Chicago’s Shluchim gathered at the Chabad House of Rabbi Yosef Moscowitz for the Grand Kinus Hashluchim Banquet.

Shluchim all over the world have become seasoned zoom hosts, thoroughly experienced at virtual Chabad Houses, masters at Shabbos and Yom Tov boxes and pre-packaged kits for every occasion; true innovators of how to keep Yiddishkeit alive despite the unprecedented challenges before us.

But nothing quite prepared us for our very own Kinus Hashluchim to have to be virtual.

We all know that as incredible as the sessions are – both the general ones and the tens of individual ones – the mainstay of the kinus is the sheves achim gam yachad; meeting an old friend in the hallway of Oholei Torah, getting to know a new colleague on the bus ride to the Ohel; the personal interactions with other Shluchim. This year COVID has robbed us from our lifeline and inspiration, our opportunity to refuel for the coming year.

Consequently, Rabbi Yosef Shmuel Moscowitz, Executive Director of Lubavitch Chabad of Illinois, took a line out of his father’s book. Rabbi Daniel Moscowitz a”h, head Shliach of Illinois, was the ruach hachayim of the kinus and put in all his energy to ensure that shluchim had the optimal experience at the kinus and would be able to go home fully charged. He took great pleasure in uplifting shluchim – double his senior and half his age alike!

So with this challenge at hand, Rabbi Yosef Moscowitz got straight to work to convert his Chabad House, “The Living Room,” into a grand banquet hall, in accordance with all safety measures. Each shliach was given a personal large round table, decked in real linen, dishes, glasses and cutlery.

As for the menu: Shluchim deserve nothing less than the top of the line—being a demographic of individuals who do just that for their congregants. So he called up his in-house chef and asked him to cook up a 5-course gourmet spread.

With The Living Room’s large space and two built-in auto screens projecting the Banquet as it was shown live, Shluchim were spread out in the social hall, and comfortably watched the Kinus Banquet in unison.

At the conclusion, these suburban, as well as Chicago-based shluchim broke out in dance like never before, feeling infinitely uplifted. Social distancing could not stop the joy and energy felt in the room with a sense of sheves achim gam yachad.

The event concluded with a four-hour-long farbrengen, leading into the annual highlight of Rabbi Daniel Moscowitz a”h, the post-banquet (zoom) farbrengen, which is still going on 4 days later.