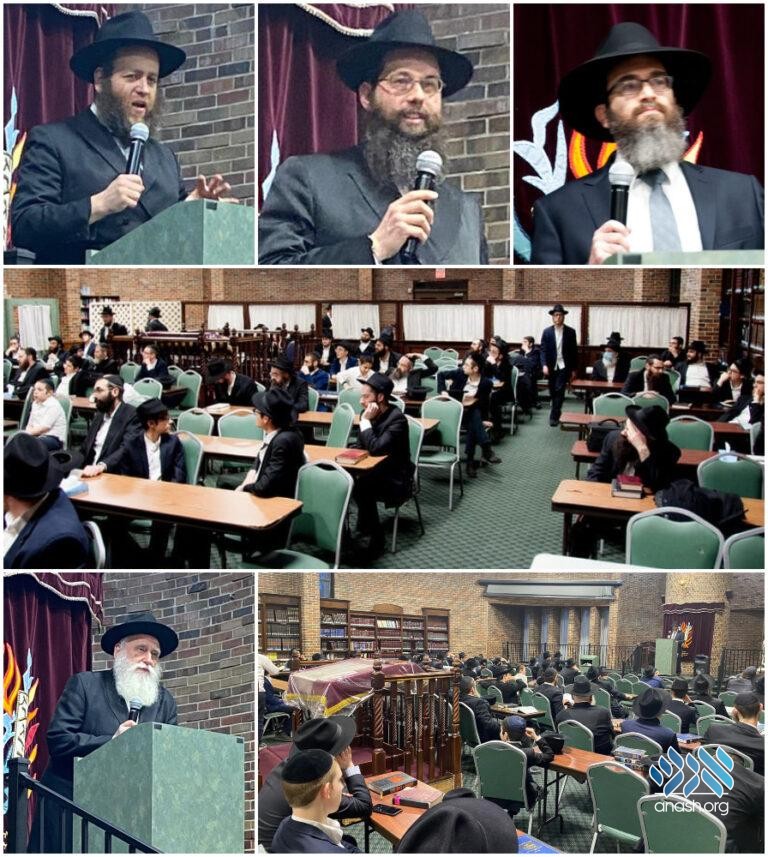 In 5724, the first Pesach Kinus Torah in Chicago was held in the then-unfinished B’nei Ruven shul. Fast forward 57 years later, and bochurim and Anash gathered once again on Pesach, keeping the annual tradition alive.

In 5724, the first Pesach Kinus Torah in Chicago was held in the then-unfinished B’nei Ruven shul. Fast forward 57 years later, and bochurim and Anash gathered once again on Pesach, keeping the annual tradition alive.

The annual Kinus, arranged by Lubavitch Chabad of Illinois, brought together a wide range of speakers including some prominent guests from other segments of the Chicago Jewish community.

The rich history of the Chicago Kinus Torah was recorded in an article for Chabad.org by Rabbi Menachem Posner in 2015.

The event began in 1964 in the yet uncompleted B’nei Ruven, and then held in a succession of synagogues before returning to this one in the 1970s. Until 1973, the gatherings were arranged by Rabbi Zelig Gottleib, a Chicago native who had studied in the Chabad Yeshivah in Brooklyn, N.Y.

“We had speakers from all the yeshivahs,” says Gottleib, who now lives in Brooklyn. “It was the one time when we would gather our peers studying in various yeshivahs for the sole purpose of learning Torah.”

In those early years, the program was chaired by the late Rabbi Avraham Levitansky, who went on to be a legendary rabbi and Chabad emissary in Santa Monica, Calif.

Since the early 1970s, an active participant and later a driving force behind the kinusim was the late Rabbi Daniel Moscowitz, who returned to his hometown to lead Lubavitch Chabad of Illinois until his untimely passing last year.

Rabbi Moscowitz would often recall that some of his friends would deride him and his Chabad friends for “wasting” time that could be used for Torah study to give out shmurah matzah or to help people make the blessings over the lulav and etrog. Yet when it came time to share a Torah thought at the Kinus Torah, they were too busy at the ballgame.

The seeds planted half-a-century ago have sprouted fruit that can be seen all over the city, which now boasts multiple Kollel institutes for advanced Torah study, and has synagogues full every morning and night of yeshivah students carrying on their studies even though they are currently on Passover vacation.

Rabbi Moscowitz continued to organize the annual Kinus Torah, recruiting and encouraging young presenters, hosting the event and listening with obvious delight until the last of the young students shared his presentation.

This year’s event was organized by his son, Rabbi Meir Moscowitz, and hosted by Rabbi Baruch Hertz of B’nei Ruven.