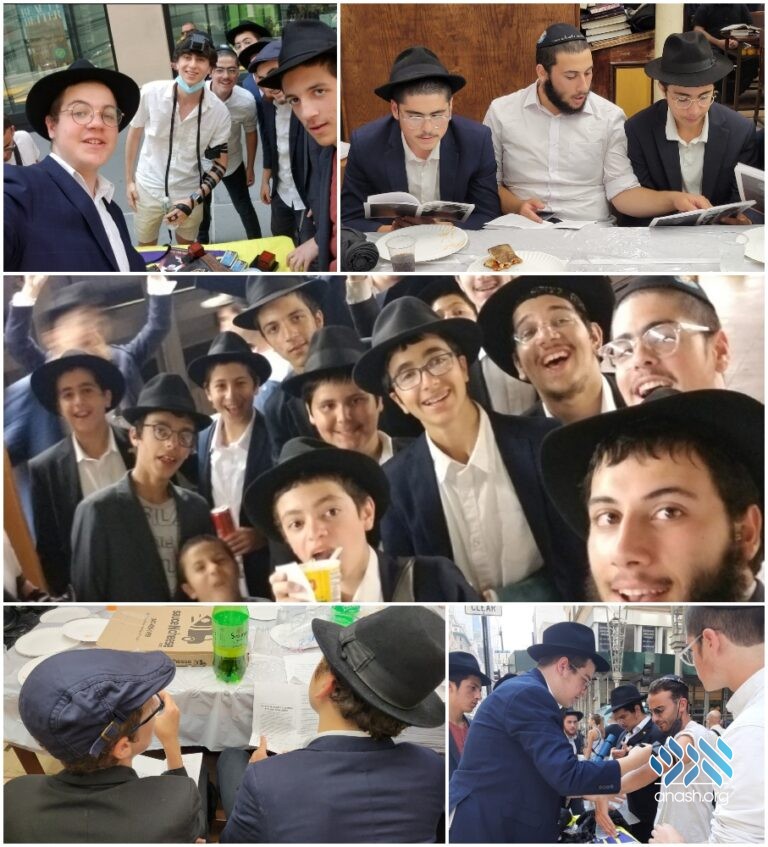 Although the official EGP program at Camp Chayolei Hamelech ended, the shluchim are still hard at work making sure the bochurim continue in the right direction until their respective Yeshiva programs begin.

Although the official EGP program at Camp Chayolei Hamelech ended, the shluchim are still hard at work making sure the bochurim continue in the right direction until their respective Yeshiva programs begin.

The official program ended Thursday afternoon with the bachurim being dropped off at Kingston and President at 3:00 PM. The bochurim arrived different people then when they left. Many took on hachlatos of going to Mikvah, davening with a minyan, walking in the street with a hat and jacket, writing to the Rebbe more often. They were proud to return to the Rebbe and his shechunah in such a mannner.

The very next day, the Shluchim were heading with them to Manhattan on mivtzoyim. setting up a stand, and helping many fellow Jews fulfill the mitzvah of Tefillin.

Friday night the shluchim and campers met up in 770 for a chayusdike davening. The very next morning they had special mezonos arranged for those who woke up for Shabbos Mevarchim Tehillim at 8:30 AM in 770. Many bachurim showed up and enjoyed the mezonos arranged on the side

Shabbos afternoon a grand farbrengen was held at the home of one of the shluchim.

Monday night the group celebrated the chassunah of our dear learning director from the previous summer (SGP 5780) – Zali Shifren. May he raise a binyan adei ad.

Then the shluchim arranged a grand Seder Sichos in 770 for Tuesday night. But the shluchim decided the Bachurim deserve more for leaving the comfort of their own homes (especially since it was pouring at the time) and decided they deserve something more.

The famous and very important sicha from the Rebbe – Shoftim Nun-Alef (5751) – was nicely printed – and some bochurim even took the booklet home afterwards to finish learning it. They then each received pizza and soda to give them the chayus they needed to learn.

The Shluchim would like to thank all those who helped make this Seder Sichos a reality.

“We are sure the Rebbe is proud of every single one of the bachurim, and of the strides they made in camp adding to their yiddishkeit and chassidishkeit! May this bring about the ultimate redemption with the coming of Moshiach now,” they said.